When Lucky Craft first started becoming popular in the U.S. marketplace in the 90’s, the first category of lures that truly gained a foothold; at least in the West were their jerkbaits. Led by their popular Pointer Minnows and then their Staysee 90, Lucky Craft became known as the leader in jerkbaits. 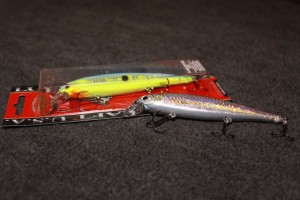 What set Lucky Craft apart from the popular Smithwick Rogues and Bomber Long A’s were several features. The first was the high quality Japanese finish. We had become accustomed to $20 lures with the success of the Lobina Lures Rico, and these new jerkbaits were every bit the works of art that the Rico was. Next was the functionality of the baits; the weight transfer system made casting in the wind a breeze and they dove deeper, especially in the case of the Staysee 90.

Lucky Craft has released their share of follow up jerkbaits, and they all have their own applications. But, this past year at ICAST, they introduced the Flash Pointer 115. The Flash Pointer 115 was developed as a result of the growing popularity of the aggressive, slashing jerkbaits like the Megabass Ito Vision 110.

The result was a sort of blending of the Pointer and Flash Minnow jerkbaits that gave Lucky Craft a slightly deeper diving 4 1/2″ minnow plug with the slashing action anglers are looking for in a jerkbait.

Hardware and Construction
Like all of Lucky Craft’s baits, the use of quality components is evident in the assembly of the bait. The Flash Pointer 115’s body resembles a slimmed down Pointer Minnow, and it is constructed of clear hard plastic that allows the lure to be finished in any of Lucky Craft’s premium finishes.

The lure has a tungsten weight transfer system with two moving tungsten balls that move to the back o the lure on a cast. These moving weights enable long casting, and create rattling sounds when retrieved. Along with the moving weights, the lure also features two additional fixed weights in front of the foremost hook hanger.

The Flash Pointer 115 features three treble hooks, which appear to be size fives. This is different from most of Lucky Craft’s jerkbaits, including the Pointer Minnow 100, which only carries two hooks. The Flash Pointer 115 measures in a 4 1/2 inches, tips the scales at 2/3-ounce and is listed as a suspending jerkbait.

What really sets this bait apart is the smaller, more tear drop shaped diving lip, which helps create the erratic slashing action in the bait. This action is slightly different than the original Pointer Minnow, which has more of a subtle action on the retrieve. 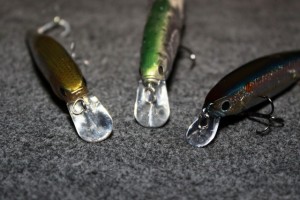 Functionality
We tested the Flash Pointer 115 on two separate occasions before writing this review. The first time was on a lake with primarily spotted bass, and three to four foot of visibility. The next was on a neighborhood pond with limited visibility into the water.

The Flash Pointer 115 is a very castable lure. With our 7′ medium action Duckett Fishing White Ice Timmy Horton cranking rod, and a Lew’s Tournament MG reel and 10-pound-test Sunline Reaction FC fluorocarbon line, we repeatedly were able to cast the lure as much as 30 yards thanks to the weight transfer system. Of course on a day with strong winds, castability will be affected, but the weight transfer system will certainly aid in that area.

The clearer water fishery enable us to experience the action of the lure while retrieved, and as it is named, the lure certainly features an erratic slashing action when jerked on the retrieve. With a semi slack line on our medium action rod and the 10-pound-test line, we observed the lure to move up to a foot to each side on the sharp snap of the rod. The lure actually has a slight roll as is slashes which turns and exposes the underside of the bait, creating an additional sensation of flash on the retrieve.

The lure rests in a nose down position when paused; which is a desirable posture in a suspending jerkbait. Lucky Craft lists the lure as a suspending jerkbait, but we found that it slowly sank in water that was 55 degrees, and sank more quickly in warmer water. As the water temperature dips below the 50 degree mark, the Flash Pointer 115 will likely suspend as the cooler water is more dense than warmer water.

We were able to catch several keeper spotted bass on the MS American Shad colored Flash Pointer 115, and the finish held up nicely, as did the hooks, which held fast on all of the fish we caught. 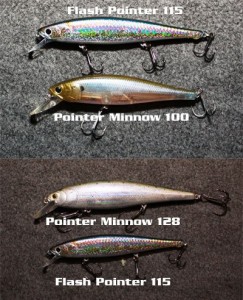 Conclusion
Our experience with the Flash Pointer 115 thus far has been enjoyable. The action is excellent for when bass are tuned into that erratic side to side action of these minnow shaped stickbaits. When compared to the action of the popular Megabass Ito Vision 110 baits, the Lucky Craft is most certainly a serviceable alternative.

Available in 28 colors and with a price point of $15.99, the Flash Pointer is certainly more affordable than the Megabass, and competitive with other high end imported jerkbaits. While it does cost more than a Rogue, it has higher end components, black nickel hooks and a weight transfer system which make the price point acceptable for jerkbait enthusiasts.