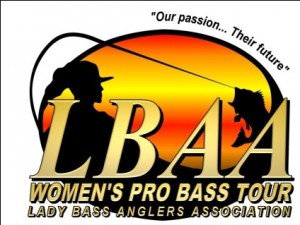 Lady Bass Anglers Association, (LBAA), a nation-wide women’s pro bass fishing tour, is hitting the waters of Neely Henry in Gadsden, Alabama this week with their first tour stop of the 2013 season.

Some of the top names associated with the LBAA will be fishing this event such as 2012 Angler of the Year, Kim Bain-Moore, 2012 LBAA Classic Winner Cheryl Bowden, as well as always top contender, Pam Martin-Wells. Pros are expected to be arriving from as far away at Washington State and as close as Birmingham, Alabama. The LBAA Pro Tour is the only professional level women’s tour operating in the United States.

“We are excited to kick off our season on Lake Neely Henry, a well known lake that has appeared on our tour schedule several times in the past. We always have good results with big bags here and everyone is excited about being out on the waters of such a great fishery,“ said LBAA co-founder Secret York.

The women will blast off from Coosa Landing Marina at safe light on Friday and Saturday, March 8th and 9th with weigh-ins scheduled for a 3pm start each day. There will be plenty of on-site seating to view the big stage as well as the ability for people across the nation and beyond to watch the weigh-in via live streaming.

Along with adding live streaming, the 2013 LBAA Women’s Pro Bass Tour will have larger venues, a bigger footprint and greater media coverage to make this year’s tour bigger and better than ever. “The NEW LBAA Pro Tour is vastly different than what any of our anglers have seen in the past,” explained co-founder Cheryl Bowden. “We have partnered with Southern Sports Group, who is responsible for all the new marketing elements that you will see this year. We are very excited about elevating the tour to a higher exposure level so that more people can see the skill these women bring to the sport of bass fishing.”

We are always excited to bring events to the City of Gadsden and work with Kerry Payne and his staff at the Gadsden Parks and Recreation Department. They have a great marina to host a tournament and if the weather cooperates, we will have some great numbers at weigh-in” said Sandy Thompson, Southern Sports Group representative.