Now that the 2011 Bassmaster Classic is behind us, the Bassmasters show has aired on ESPN2 and the stories have been told in print and web around the world, we can begin to measure the impact of the event. 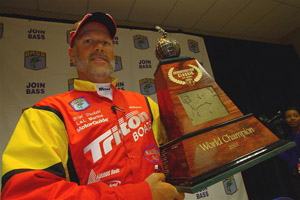 It won’t be too long before we’ll start seeing news of the event’s economic impact for the City of New Orleans.  We’ll hear reports of tourism dollars spent, and sales taxes generated that will blow the average consumer’s mind.   However, important those statistics are, where the rubber meets the road for the industry company, is where the success of an angler triggers response for their particular brand.

The fans of bass fishing are voracious for the details of the winner’s patterns.  They want to know every detail of his program; what lure, line, rod and reel were the winning combination.  Every detail is analyzed, down to how many turns of the reel handle, or did the angler make a change in line size to change the depth of the lure’s path become important.

Nowhere is the impact of a championship victory more immediate than for the lure company.  The potential consumer response to a Classic winning lure is so desired that some companies have begun to build specialized products for their pros that are competitors in the Bassmaster Classic.

The past five editions of the Bassmaster Classic have been won by Boyd Duckett in 2007, Alton Jones in 2008, Skeet Reese in 2009 and Kevin VanDam in 2010, and again in 2011.  Each of the companies that produce lures for the respective anglers have received an increase in sales of particular products that their pro-staffer was using to win. 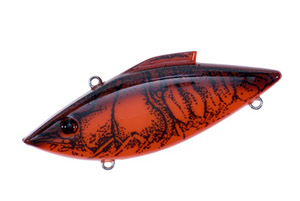 In 2007, Duckett used a ½-ounce Red Crawfish Bill Lewis Rat-L-Trap and a Black with Red Flake Berkley Chigger Craw flipped in grass.  Alton Jones primarily used a 1/2- ounce Booyah Alton Jones A-Jig in Ozark Craw (brown and purple) with a YUM Chunk on the back in 2008.  Skeet Reese used a 1/2-ounce Lucky Craft Redemption Lures Spinnerbait in a color that came to be known as Classic Shad, and a black and blue Berkley Crazy Legs Chigger Craw. 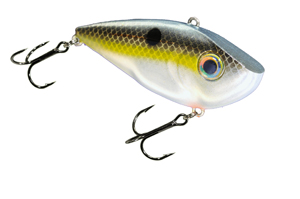 Each of these lures reached new levels of demand after their winning performance in the Bassmaster Classic.  Retailers began taking pre-orders for them.  The lures became some of the most talked about products in fishing, and while they can be the boon of the tackle business; the struggle to get them quickly from manufacturers who are forced to increase production quickly can also make it one of the most frustrating times as well.

We talked to two of the companies to find out what the immediate impact of their pro’s Bassmaster Classic win.

Berkley
For the past several years, the folks at Pure Fishing have released products specifically for their pros to use at the Bassmaster Classic.  One of the first to see that release was the 4” Chigger Craw and it made an immediate impact.
In 2007, the Chigger Craw was a closely guarded secret leading up to the tournament, with Berkley pro staff receiving shipments as the Bassmaster Classic drew near.  As Classic pre-practice commenced, Berkley pro support staffers were sent to Lay Lake to make sure their anglers had enough Chigger Craws.

By tournament’s end, Duckett would claim victory by casting the Rat-Trap in the morning, then culling out those fish with bass he caught in the afternoon flipping matted grass with the Chigger Craw.

Later that year, Scott Suggs, who became the first angler to win $1,000,000 in a single tournament in the 2007 Forrest L. Wood Cup, did so using a lure that was an adaptation of the Chigger Craw; which would be released later, and again play an important role in Berkley’s Classic success.

That lure, the Crazy Legs Chigger Craw would prove to be part of Reese’s one-two punch in Shreveport, La. in 2009 when he claimed victory in the Bassmaster Classic.  Reese would alternate between his signature Lucky Craft Redemption spinnerbait to pad stems, and flipping stumps and laydown logs with a black and blue Crazy Legs Chigger Craw.  Once again, Berkley struck gold with their plan.

Ron Kliegl, Senior Director of Product Management for Pure Fishing said that the launch of products at the Bassmaster Classic has become vital.  “This has become a very big deal for us,” Kliegl reported.  “We recognize the instant recognition that a Classic championship means to the awareness of a lure; it has provided a big boost to some of our products.”

Kliegl said that the first battle in launching a new product is getting the angling consumer to try a new product, and making a debut at the Classic can be a big advantage.  “If we can convince a consumer to step into the ‘trial’ stage of a product, we have a chance to have it become one of their mainstays,” he said. “When they see a big tournament won on a lure, it helps convince them to try it.”

In the case of the Chigger Craw, Kliegl said that it has had a major impact on the product category.  “We’ve always seen Power Worms and Power Grubs in our best seller category,” he said.  “But the immediate response following the Classic wins has helped push the Chigger Craw family into the top five of our best selling lures; it made a recognizable impact.” 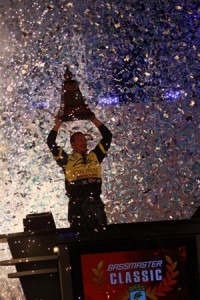 For 2011, Berkley chose to launch their new Havoc lineup at the Classic.  Havoc is a line of soft baits designed by their pros.  The first four shapes, designed by Reese, Gary Klein, Mike Iaconelli and Bobby Lane produced immediately.  While the lures didn’t produce the win, seven of their anglers finished in the top 15 using the lures in part or as their whole program.

“We had a great response at the Classic Expo and after regarding the Havoc line,” he said.  “Havoc was a little different, because it is a new brand, but it sold out at the retailers that had it at the show, and our orders after the Classic have been good as well.”

Kliegl revealed that the impact of a Classic win can far outweigh the marketing efforts of a lure in the traditional timing of a release.  “When compared to a traditional product launch at ICAST, I’d say that a Classic win can be a much more effective marketing tool,” said Kliegl.  “Without being to compare actual numbers, I’d say that it could safely produce at a five to one ratio to a standard launch and marketing campaign.”

He said that B.A.S.S. has been exceptional in their support of the program.  “B.A.S.S. has been a tremendous partner to us in our launches at the Classic, and this year was no different,” he said.  “With their willingness as a partner, and the success of our anglers; the Classic has been a great place to launch new products.”

Strike King Lure Company
For the past two years, the Tennessee lure maker has captured lightning in a bottle with VanDam’s back to back Bassmaster Classic championships.  While they haven’t produced specific baits for the Bassmaster Classic, they work to produce lures their anglers feel confident in throwing, and that translates to success.

Strike King’s Marketing Manager Chris Brown said that the wins have resulted in sales of the winning products, but have also opened other opportunities for the company as well.  “We’ve seen significant orders of the winning lures for sure,” said Brown.  “But Kevin’s wins have also spawned opportunities for sidekick products that will be new potentials for the company as well.”

Those products proved to come in the form of kits that will be marketed to specific retailers.  “One of those kits was already in the works, and another was kicked off the day after,” he said.  “What the win provided us in those instances was an immediate impact for branding.”

Brown revealed that the Classic provided opportunity for Strike King personnel to make immediate branding changes to the labeling.  “Being able to have the images from the tournament gives us the chance to immediately re-brand these kits,” he revealed.  “We can immediately change the packaging graphics with photos from the event as a “Classic Winning Lure” kit, which can dramatically help in the marketing of the products”

In 2010 VanDam set up shop in a backwater area of Beeswax Creek.  He used a 1/2-ounce Red Eye Shad in Gold Sexy Shad, which at the time was only available in a kit at Bass Pro Shops.  In 2011, he used two lures, his signature 3/8-ounce Kevin VanDam spinnerbait in Sexy Shad, as well as his primary lure, the KVD 1.5 Square Bill crankbait in chartreuse and black color.

While the response to each was similar; retailers ordering tens of thousands of the lures almost overnight, it triggered a different response from the company.  “Because the Gold Sexy Shad color was not a stock color, it created a unique situation for us,” said Brown.  “We had to ramp up everything to meet demand; which created a challenge, but, we were able to respond fairly quickly.” 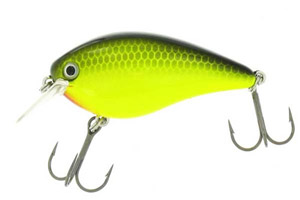 However, the KVD Square Bill he won with this year is already a lure that was on Strike King’s hot product list following its release at ICAST the summer before.  “We are seeing an increase that’s for sure, but some of the demand was already met by existing stock on the shelves,” he said.  “We did have reports of employees at Bass Pro Shops just leaving the stock cart in the aisle in the days after the Classic, because customers started grabbing them from the cart before they could get them on the pegs.”

The biggest advantage Brown sees is that the label of “Bassmaster Classic Winning Lure” is one that lasts.  “I was having dinner with Bassmaster writer Don Barone after Kevin won the 2010 Classic and he asked me what it meant to a lure,” Brown said.  “This title lasts forever; it’s something we can place on a lure for many years to come.  If one of our team members wins an Elite Series or FLW Tour event, that recognition lasts until the next event; the Classic is different.”

“The response has been great, I’d say that over the life of a lure, it can increase ratios to five, maybe six to one,” said Brown.  “Last year (2010) was a little more dynamic, because it was a limited production lure, and this year we’ve seen a sharp increase, so winning the Classic is definitely an effective marketing campaign.”