One of the most frightening and frustrating experiences for an angler is cold water. Add to that equation an inflow of fresh mud and many anglers might be found sitting in the floor of their boat quivering.  The only thought scarier than that for a bass angler is to take those above conditions, and put them onto a shallow river system. 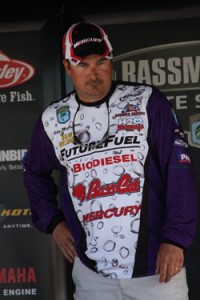 There are no more dynamic type of fisheries in the country than rivers.  The constant flow of current, added to shallow sloping banks and the diverse environments rivers flow through makes change a constant.  There are times that an angler might fish a laydown and load the boat one day, then return to find the log missing the next.  A river can turn from clear to muddy overnight, and the average angler become perplexed.

Dealing with this constant state of flux is a specialty.  River Rats are those who adapt and develop a set of skills for coping with these ever changing conditions.  One of those anglers is Billy McCaghren, an Elite Series pro from Mayflower, Ark. and he not only adapts; he’s spent 20 years loving the tough conditions.

McCaghren said that he has experienced the river style fishing in his home state, and has found ways to catch bass out of river style waterways in water as cold as 38 degrees.  It wouldn’t be his primary choice to spend a day on river in cold water, but tournament anglers don’t get to choose.

“I fished a team tournament a few years ago on Lake Dardanelle, which is a lot like a typical river,” McCaghren said.  “The water was 38-degrees, and we weighed a 17.5-pound limit, and culled through a second limit to get there.”  He said that he caught most of his fish on a suspending jerkbait, and he and his partner finished in the top five. 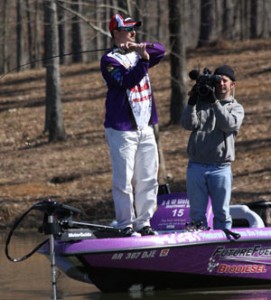 Out of the Gate
McCaghren said that the first thing he wants to do in the morning is to check the water temperature and the flow of the river.  The surface temperature will give him an idea of what the fish are going to be doing.   However, he’s careful to check in two areas to see if there is a difference.  “When it’s cold, I want to check the current areas to see if there’s been a change in the current flow,” he said.  “I also want to check and see what the temperature is doing, because that will tell me how active they’ll be.”

If the water temperature is in the 50’s, which the former Elite Series Rookie of the Year said is the norm for his home waters, then he knows what to look for.  “If I don’t see too much current, then I will start on the main river and look in the current,” he said.  “If the current is high, then I’ll begin my search in the backwater areas.”

One thing he was adamant about was that anglers take their time in their approach.  “You have to be patient in cold water anywhere, but it’s even more important on a river,” he said.  “You have to be prepared to fish very slowly in order to trigger strikes.” 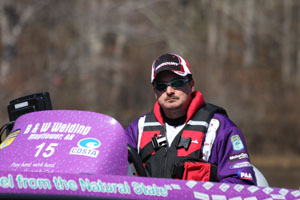 What to Use
He said that he’ll have two different approaches for those areas.  For the deeper, in current attack, he uses a jig, but turns to a spinnerbait more around shallow backwater areas.  “I really like to use a Talon Lures Flipping Jig if I’m looking for shallower target oriented fish, and a Talon Weedless Football jig for the deeper areas,” he said.  “If I’m fishing shallow areas, I’m looking for current breaks, boulders and laydowns that fish can set up around, and the flipping jig is better for that, but the football jig is best on the edges and deeper holes.” He likes a Zoom Chunk or even a pork chunk on his jigs because he doesn’t want too much action.

The spinnerbait is his favorite when he is in the backwater areas, because he says it gives him a way to comb the water a little more quickly, looking for a reaction strike.  “I’m not burning the spinnerbait, he said, but it still helps me cover more water,” he said.  “I really like a 3/8-ounce Talon Shibui spinnerbait, because it stays up in the water column a little better, and I can really slow it down.”
His jig combinations are usually tries to keep his colors simple in both categories.  “I use black and blue or green pumpkin jigs and shad colored or chartreuse, white and blue spinnerbaits most of the time,” he revealed.  “I like to keep it simple, and these colors will produce just about anywhere I fish.” 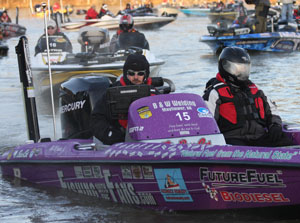 His jig equipment is usually a Powell 734c casting rod teamed with an Abu Garcia Revo Premier in a 6.3:1 retrieve speed.  For the spinnerbait, he chooses a Powell 703c with the same reel, unless he’s in really tight quarters, then he turns to Powell’s 683c for casting accuracy.

He uses 12-pound-test in deep water for the jigs, and as high as 20-pound-test for the shallow targeted approach.  For the spinnerbait, he prefers to use 20-pound line, but will go as light as 15-pound-test if he feels like he needs to hide the line from the fish.

Hit Everything
McCaghren said his best piece of advice he could give would be to cover the water very thoroughly, be accurate and to keep an open mind.  “River bass are cover oriented as it is, but they’ll even be more so if the water is cold,” he said.  “They’ll get tighter to cover because the rock and wood hold heat, and they give them shelter from the current.” 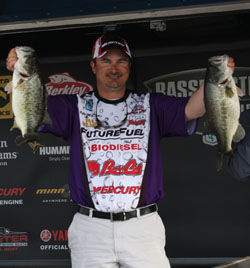 He said he finds that bumping the cover with his lures is the most effective approach; with either the jig or the spinnerbait.  “With the jig, I’ll put it in there and shake it against the stump or the log down the whole length of it,” he said.  “I may have to slow things way down, and really let the lure soak in there, but it’s what it takes to make them bite.”

The same is the case with the spinnerbait; he said accurate casts set up the whole thing.  “I want to bring the lure into the cover,” he said.  “I have to put the lure in there quietly and make it bump that log all the way down the length of it, or make multiple casts to it if it’s a stump, making contact each time.”

He suggested anglers look shallower; even in cold water, than they thought they might ever catch a bass.  “I’ve caught them in 10 inches of water before on a river,” he said.  “It really pays off to fish anything that looks good, even if it’s only a foot deep.” 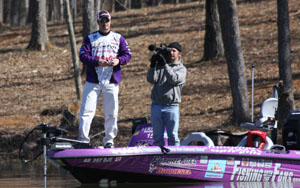 What if it Gets Muddy?
The biggest challenge he faces is when winter storms muddy the water overnight, and he said the best thing to do is slow down a little further, and increase the profile of his offerings.  That means making a color change, increasing the size of his jig, or changing the blades on his spinnerbait.

“If it gets muddy, I’ll change my jig to the Shibui Ooki jig, which has an extra long skirt to help the fish find it easier,” he said.  “I will change the blade styles on my Shibui spinnerbait too, switching from a double willow in clear water, to a tandem Colorado / willow in stained water, to double Colorado in dirty water.  The final thing is to slow down even more.”

His final piece of advice for any condition is to keep an open mind.  “If you’re in a tournament you really have to be open to trying different things, but if you’re not in a tournament,” he suggested with a chuckle.  “Be ready to pick up a crappie jig and catch crappie.”