Tommy Biffle is a sure Hall of Famer.  He is one of the best in the world at picking apart shallow cover with his trademark jig and Flippin’ Stick.  The combination of Biffle and heavy cover in ankle deep water has produced the bulk of his five B.A.S.S. and one FLW win, and $2,299,603 in career earnings. 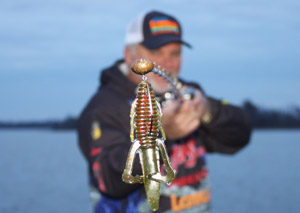 So known is he for his Flipping and Pitching, that when Biffle set up shop on offshore flats at Fort Gibson; his home lake, for the final event of the 2010 Elite Series season, it had many shaking their heads.  Many people familiar with the sport wondered aloud if Biffle had gotten lost.

Four days later, the wondering had subsided, and the wonder had begun.

Biffle had won in wire to wire fashion using a new (to the industry at large) technique he called Bottom Buggin.’   Bottom Buggin’ incorporated a unique football head attached to a wide gap hook, to which he attached his namesake Biffle Bug from Gene Larew.  The football head on what would become known as the Biffle Hardhead was a prototype, and the hook was a free swinging appendage to the jighead.

At initial view, the Hardhead looks like a unique style of football head jig that one would use for hopping along the bottom.  However, Biffle had an entirely different use for the combination, and the world found out how effective the package was. “It’s not a slow moving lure,” said the Wagoner, Okla. pro.  “It’s designed to allow an angler to cover water and make bass have to strike; it’s the perfect combination of jig and reaction bait.”

So, what is Bottom Buggin,’ and how did an angler who usually finds himself neck deep in brush find a revolutionary new way to fish offshore?  The answer begins with a friend. 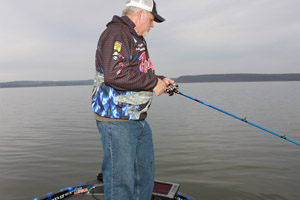 The History of Bottom Buggin’
The veteran pro said he was showed a similar setup, and wasn’t immediately impressed.  “A friend of mine showed me something like it with a worm attached to it, and I didn’t really think much of it,” said Biffle.  “He told me I needed to give it a try, but it just didn’t feel right to me the way he had it set up; it looked more like a shaky head with a finesse worm.”

However, the more he looked at the bait; he wondered what the possibilities might be.  “I asked my friend if he’s thought of trying one of my Biffle Bugs on there,” he said.   “He said no, but I decided to take a look at it for myself.”  He tied one on, but didn’t throw it.

The first tournament that he actually had the setup in the rod locker of his Ranger was the Smith Mountain contest, but it stayed in the box.  When he returned to Wagoner after the event, he hosted an outdoor writer on his home lake, it was then he tried it.  “I saw it sitting there and decided to throw it,” he said.  “I cast it out and started reeling it back to the boat; in five casts I caught four bass for 20 pounds, and missed the fifth one.”

Biffle said he almost cussed himself for not using it at Smith Mountain.  “I knew right then that I should have thrown it in Virginia,” he said.  “That lake was set up perfect for it, and I didn’t use it.”  That changed at that moment.

His next experience with it was at Kentucky Lake, where he caught some bass off of the ledges on the Bug and Hardhead.   But, when he found his better fish shallow, the rig paid dividends.  “I saw a six pounder cruisin’ down the bank, and it stopped under a walkway,” said Biffle.  “I told my Marshall to watch the next cast, and I threw the Bug and Hardhead shallow and started reelin.’ That fish came out and mugged it; I used it on those walkways the rest of that tournament.” 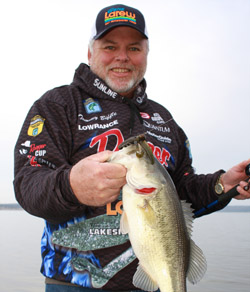 Fast forward to Fort Gibson, and the legend of Bottom Buggin’ was born.

How to Bottom Bug
Bottom Buggin’ looks more complicated than it really is, and as Biffle explained, people tend to make assumptions that complicated it.  “Most people look at it and think that there’s a trick to fishing it,” he said.  “They think they need to fish it slow like a jig, or shake it and that’s not it at all.  They just need to cast it out and reel it.”

The decisions that need to be made with the rig start with equipment.  Biffle chooses his signature 6’ 10” Tour Biffle rod from Quantum.  The rod is labeled as a heavy action, but it has enough tip for casting and absorbing strikes.  He pairs that with a Quantum Tour Edition PT Burner Reel in 7.0:1 retrieve which he spools with 20-pound-test Sunline Shooter Fluorocarbon.  He said that the line size is important because it helps fight abrasion, and because the bait is moving, bass don’t worry about the line anyway.

The next factor to consider is size of the head, and Biffle bases his choice on water depth.  “Keeping the bait in contact with the bottom is important, and I let the weight of the head, and my retrieve help me keep it down,” he said.  “I use 5/16 in three feet or less, 7/16 to about 12 feet, and 11/16 for anything deeper.  Then all I need to do is adjust my speed to keep the bait down.”

Biffle prefers to make long casts and after the lure touches down, he begins reeling.  “I don’t pause the lure, I keep it moving,” he said.  “Football jigs hang up, and I want this to keep rooting through the structure to make bass react; I think they see it as a crawdad trying to get away.” 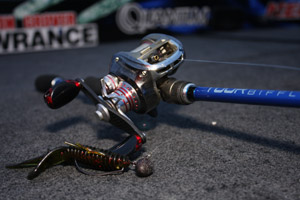 He said strikes will be obvious; either the feel of the lure banging through rocks will disappear, or the rod will load up, but occasionally, the bass will crush the lure.  “Whichever kind of bite you get, you need to whack ‘em good,” he said.  “It’s a jig at that point, and they’ve got it deep, so hit ‘em hard.”

Where to Bottom Bug
Biffle said he prefers to Bottom Bug on flats, especially those that feature a rough bottom.  “Most of our lakes are old enough that the flats have kind of silted in,” he said.  “If I find one that has a rough bottom, I know the bass will be there, and I want to scoot and bang the lure on and through those rocks.”

While he prefers to Bug flats, he also acknowledged that the lure would work well on long tapering points, or parallel to bluff walls, as long as someone could make contact with the structure.  “This isn’t a swimming jig, you have to be beating it along the bottom,” he said.  “Some of my heads are so beat up that they probably weigh less than when I started.  As long as you can keep it moving, and hit the structure, you’re doing it right.”

Colors
Had it been the old Biffle, he would never had chosen the Sooner Run color that he won with at Fort Gibson. “Normally in water with around two foot of visibility I would choose black and blue or black neon,” he said.  “But, now that I see how good it is, I almost always start with Sooner Run.”

The ironic thing about the color is that it almost never existed.  “George Toalson is the plant manager over at Gene Larew, and he’s always playing with colors,” Biffle said.  “He gave me a few to try and I caught them on it really good.  When I asked the office people for more, they’d never heard of it.”  He made his own version of the color by drawing on the back with a black Magic Marker, and caught them despite the bad smell of the pen. 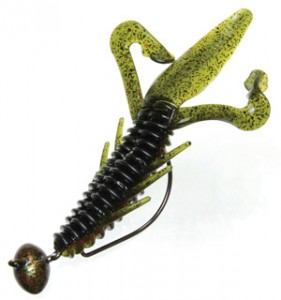 They poured some more of the color before the event, and his win gave the color its name; Sooner Run, after the tournament he’d won with it.  The color is a watermelon red flake bottom with a dark watermelon back.

He did say that if he could only choose one color, it would be smoke with silver flake.  The color is known by some internally at Gene Larew as Chrome.  Biffle said that it catches fish because it mimics the base of the food chain; shad.  “They’ll eat shad anytime, and that color looks like a whole school of shad in the water.”

Final Tips
Biffle said the only recommendations he would give would be to make sure the anglers’ equipment is up to the task.  “Make sure the rod has good backbone for setting the hook,” he said.  “It should have a little tip like my 6’10” has, but it’s got to be strong for a good hookset.  The Wide Gap Owner hook rests on the back of the Biffle Bug in the groove, and it helps to really drive the hook if the rod is strong enough.”

He also suggested anglers use heavy line, and keep the bait moving.  “Make sure your line can handle abrasion, they won’t see it, so don’t worry,” he said.  “Make sure you keep it moving, the Bottom Bug is best when it’s banging and scooting along the bottom; that’s when you’ll get the best bites.”