Bass fishing is all about decision making. Finding the location of the bait and the bass are two of the more important factors when establishing a pattern on the water.

One of the more confusing decisions can be selecting the color of soft plastic bait you are going to throw. It’s not hard to imagine why either. When you lol at the color charts of the major and minor soft plastic manufacturers, the choices can be downright mind boggling. 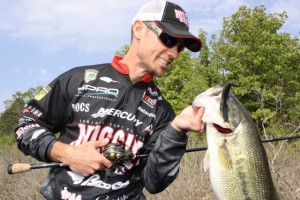 It seems there are every shade of the rainbow accounted for, and even some shades that are completely constructed from scratch. Then, when you factor in the potential variances each color can have in the flake department; we might as well throw our hands in the air, close our eyes and guess.

Should I choose the pumpkin with green flake, the green pumpkin with red flake, the black and blue, the motor oil or the scuppernong? Don’t even get me started on handpoured worms, the color variances in those can be three times as many.

To try and help make the decision easier, we went to the anglers who make these decisions on a daily basis to find out what factors they consider when choosing colors. With these pros, the decisions they make can be the difference between getting paid that week, or going without. So, having a set of principles to start with.

We wanted to pull someone from each area of the country, so we found anglers with broad geographical backgrounds.

We talked to them about three major types of presentations; Flippin’ and Pitchin’, deep water worms on ledges and finesse fishing with drop shot rigs. All of them had a plan for where to start and how they make those decisions.

Crews’ Thoughts
Crews is such a fan of soft plastics that he started his own lure company called Missile Baits . In its short lifetime, Missile Baits has already gained significant traction in the retail market, and has won a National Tournament when pro staffer Ish Monroe won the second event of the 2012 Bassmaster Elite Series schedule on a DBomb.

In developing his color wheel for the company, Crews looked to develop colors that fit needs he felt standard colors didn’t fill. “I only did a handful of colors in the Missile Baits product line,” he said. “I built them all to fill a wide variety of needs for anglers.”

In the Flippin’ arena, Crews has his DBomb creature bait and Missile Craw, and he follows a standard progression of colors when choosing. “In darker water or low light conditions I tend to begin with Bruiser Flash, a black and blue combination,” he said. “The dark bait works in water that is lightly stained to dirty, and I believe the blue mimics hues found in craws, bluegill and shad.”

He said that water that is clearer gets more of a watermelon or green pumpkin hue like his green pumpkin, green pumpkin red flake and Super Bug colors. Flippin’ around grass causes him to look for baits with greens and purples in it. “Grass tends to congregate a lot of bream, so I try to mimic their colors,” he said. “My favorite around grass with clear to stained water is the Candy Grass color, which is a great bluegill imitator.”

For throwing big worms on offshore structure, Crews prefers his Tomahawk 8.75 curl tailed worm. He chooses color based on sky conditions. “In sunny conditions I tend to use green pumpkin a lot, ” he said. “In darker water or darker conditions I throw Blue Fleck or even the Bruiser color, a black / blue.”

He said he tends to experiment more with finesse worms like his Drop Craw, a miniature drop shot craw he designed. “Dropshotting is a much more visual presentation, so even in clear water, I tend towards more bright colors,” he said. “I like to try my Pinkalicious color because it gives me something different right off the bat.”

If his experimentation doesn’t pan out, he turns to more natural hues like Nattie Light when baitfish are prominent or Ghost Brown craw and his watermelon red or green pumpkin reds when he is around the springtime or when bass are feeding on crawdads. 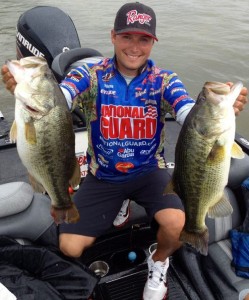 Lucas’ Plan
Lucas, an FLW National Guard pro tends to stick to basics for simplicity purposes. “Whether it is a BerkleyHavoc Pit Boss, Craw Fatty or Rocket Craw, I Flip black and blue or green pumpkin almost all the time,” he said. “If the water has less than six-inches of visibility or low light conditions, I go black and blue, otherwise, I go green pumpkin.”

Lucas is the same when it comes to big worms offshore, and having spent so much time on his new home lake – Guntersville – he has found it best to keep things simple. “I do the same thing with the Big power Worms,” he said. “Light and water clarity are the factors and my choices are green pumpkin for good visibility and Plum for the rest of the times. That keeps it simple for me there.”

Finesse fishing is where he experiments a little bit. With California roots, he has learned the importance of color variations for clear water. “I still follow the water color and light penetration program, but I’ll experiment a little more,” he said. “I think finesse fishing requires a little more creativity to make fish bite.”

In clear water, high skies, or when spotted bass are around, he opts for a Berkley PowerBait Handpoured Finesse Worm in Prizm Shad. If things require a little more color, then he opts for Oxblood Light Red Flake or Blue Crawler. If he is starting out in the morning or the skies are cloudy then he leans towards Watermelon Magic or the Triple Margarita color.

“Everything I do is based on confidence in a color, and visibility,” he said. “These factors have really helped me catch more fish and keep my mind clear.”

Niggemeyer’s Palette
Niggemeyer is an Elite Series pro from Van, Tex. who favors shallow water and heavy cover. But, coming from Southern California, the veteran pro has learned to experiment with color within what he calls a “palette” to give him the best chances of catching fish. “I really have a few basics, but I play within them,” he said. “I have the blacks, the solid greens for varying stains of water and the translucent greens for clearer water.” 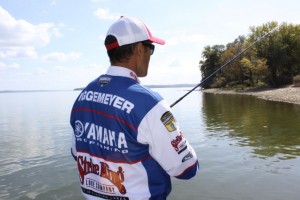 If he is Flippin’ dirty water, he leans towards black and blue, but if the water is muddy, he tends towards Black Neon; which is a black bait with red flake. For heavily stained water, Niggemeyer turns towards the more opaque greens in the green pumpkin family, then turns to watermelons in lightly stained to clearer water. But, as he said, he plays within those spectrum.

“I use an Okeechobee Craw Strike KingRodent a lot around grass in stained water because it mimics a bluegill very well,” he said. “If I am Flipping grass in clearer water, then our Double Header Candy or Hard Candy colors give me translucence while mimicking a bluegill.”

In big worms, Niggemeyer tends to lean towards Blue Fleck and Plum colors in stained water, while turning towards green pumpkins and watermelon or watermelon / red if the water has good visibility. “The Rage Thumper has great action, but it still helps to find the right color,” he said. “It’s hard to beat those colors on offshore ledges.

Another angler with California roots, Niggemeyer likes to be selective when he is choosing baits for Finesse fishing tactics like dropshottin. “I really start with trying to identify the predominant baitfish,” he said. “If shad or silvery baitfish are present, then I tend to go with our KVD Dream Shot in Ghost Shad. But, if the bait are minnows or shiners, then the KVD Magic color is a great one to use.” If bass are finicky, but not necessarily feeding on baitfish of any kind, then he tends to turn towards colors like Dirt; which is a pumpkin dark pumpkin laminate type color to mimic craws or other worms.

Lefebre’s Open Mind
An FLW Tour Kellogg’s Pro from Erie, Penn., Lefebre is much more open minded about his color selections. In fact, he would be the first person to tell you that he carries every kind of color he can think of with him to an event, then fine tunes it during practice. “I’m a little bit more specific about colors than most guys,” he said. “I’m not the kind of guy that tries to keep it simple. I want to be able to have something that triggers the bass into striking.”

That said, Lefebre does keep things in one category when it comes to Flippin’. “By nature, Flippin’ is a stained to dirty water technique,” he said. “So, I tend to keep things fairly dark with blacks, browns and greens. If I am Flippin’ around grass and I need something a little clearer, I turn towards watermelons and Smoke with Red Flake.” he said that the past couple of seasons he has been experimenting with the old reliable YamamotoDouble Tailed Hula Grub on a Flippin’ Rig, but also turns to The Flappin’ Craw in cleaner water and the Fat Baby Craw for sparse cover.

While his color selections may seem conventional, Lefebre tends towards the opposite. “I think heavy fishing pressure can make bass want something different,” he said. “I’ll often try a color like Watermelon / Red in heavily stained water even though I know black and blue might be the conventional choice. That way, I’m offering the bass something different than the majority of the field.”

Lefebre also admits to being an angler that tries to avoid offshore fishing unless he is forced to go there. So, in the case of big worms, he is very “by the book.” He chooses his colors based on the conditions. Blue Fleck and Junebug are his choices in stained water, and watermelon / red or gold flake for clean water and he mixes in a Plum or Plum Apple color whenever he sees fit. 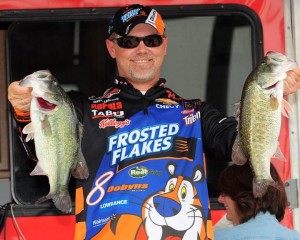 With finesse worms, he feels the same. He stays with three basic hues, transparent greens and shad colors in clear water, green pumpkins for dingy water and more solid colors for dark water. However, he said he feels finesse fishing is largely a clear water game, so he often looks for subtle hints of color that will make a difference. “I’ll look for little slight variations to make a difference,” he said. “Sometimes they’ll eat Natural Shad, the next time it’s Baby Bass, or Smoke Black Flake or a Blue Pearl Silver Flake. All of those are in the same basic translucent shad type colors, but they have different pearls and highlights that gives them a different look.”

The biggest thing that Lefebre said could offer anglers an advantage is to think of changing colors as switching spots. “There are times that I know I’m going to be in one basic location doing the same thing for a long time,” he said. Fish get accustomed to seeing the same bait, so I’ll try one pass with one color and then switch it up. or I’ll try a different color weight or go to a red hook; all of those things can reignite a bite.”