This week marks the beginning of the 2012 Forrest Wood Cup. For the second time in the last three years, FLW has brought their championship to the spotted bass factory of Georgia, Lake Sydney Lanier, a short drive from Atlanta.

In 2010, transplanted Californian Kevin Hawk rode two primary lures; a Sworming Hornet Fish Head Spin and a dropshot rig with a Morning Dawn Roboworm to his first FLW Outdoors Victory. The story has been told, but Hawk reported moving the Georgia to practice on Lanier immediately after qualifying for the 2010 Cup. His game plan; which came after months of scouting, was to use a run and gun approach and hit as many deep brushpiles as possible each day.

He alternated between casting the Fish Head Spin and vertically dropshotting the Roboworm. He also had the program down to the point that he knew quickly whether he would catch a bass off the brushpile or not. If he saw fish on his fishfinder, he would make several casts to it, if not, he would make a vertical drop into the middle of the pile, and move on if he did not get a bite.

The approach worked well. Hawk took the lead on day one, trailed on days two and three, then grabbed hold of the event on the final day with the largest bag of the day, a 14-pound, 13-ounce limit that was the only double digit weight of the day. 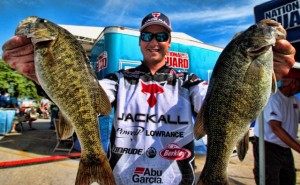 All of that to say that Lanier is likely to fish much the same this week.
The freshwater playground of Atlanta, Lanier is home to incredible boating pressure that causes the fish to spend much of their life deep, so deep brushpiles on the main lake are likely to produce the most consistently. In speaking to several of the competitors over the past few weeks, that is precisely what many of them are planning to do.

Current Conditions
The Atlanta area is expecting to see highs in the upper 80’s to low 90’swith overnight lows in the high 60’s to low 70’s. Humidity is expected to remain high with levels up to the mid 90th percentiles. What that means is that for the bulk of the week, anglers can expect to be greeted by afternoon thunderstorms that often occur in much of the Southeastern part of the country.

Those storms are expected to subside by the end of the week and the cloudy conditions are expected to give way to sunny skies. What that could point to is an event that causes anglers to have to adjust. The cloudy conditions could cause anglers to have to chase roaming schools of spotted bass that are reacting to baitfish being stirred up by the conditions. However, as the event wears on and the sunny skies appear, the anglers who expected the deep water bite to be the focus may get their wish.

We also spoke to Malik Wilder, a local Lake Lanier angler and friend of Advanced Angler who operates two websites designed to get underprivileged youth into the sport of fishing ; www.fishinc.com andwww.fishingforhiphop.com. Wilder has been fishing the lake over the past couple of weeks and said that anglers could expect to run into bass at different levels. 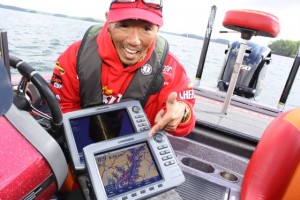 Wilder reported fishing near the Laurel Park launch site this past week, and he reported having fish schooling on the surface in the morning before the bite toughens up in the afternoon. Wilder reported catching several fish on crankbaits and small topwaters, but also reported having to locate bass among the stripers during the schooling activity.

Who to Watch?
While the politically correct answer would be that everyone who qualified for the 2012 Forrest Wood Cup has a chance to win it, truthfully, there are those who have their strengths that truly seem to line up with a lake like Lanier.

One of those anglers is Cody Meyer, from Auburn, Calif. Meyer is an excellent spotted bass angler who fared very well during this same event in 2010 on Lake Lanier. With a second place finish then, strong fishing skills in the deep water arena and all of the information from the previous Cup experience to fall back on, Meyer is a solid choice to contend for the win.

Shinichi Fukae is an angler who completely devotes himself to study ad practice. In preparation for the 2010 Cup on Lanier, Fukae entered more than 800 waypoints into the memory of his four Lowrance HDS 10 fishfinders. Those waypoints were of brushpiles that he felt would produce during the event, and he still has all of those at his disposal, along with whatever else he has located in preparation for this year’s event. Couple that with his finesse fishing roots and he is also an angler to watch.

David Dudley, Bryan Thrift, Clark Wendlandt and Jason Christie all finished in the top 12 the last time the Forrest Wood Cup made its stop here in 2010. Dudley, Thrift and Wendlandt are all winners of the FLW Angler of the Year title, and Christie has shown a remarkable ability to be versatile, so, we cannot count them out either. 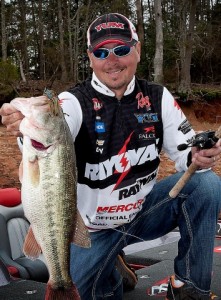 Normally, we would place high expectations on former FLW Cup Champion Brent Ehrler to very well at this event because of his skillsets. But, without fully knowing how well he is feeling following his automobile accident last month in which he suffered injuries to his ribs and hands, there is no way to tell how he will do physically in Lanier’s heavy traffic conditions. If he is close to 100-percent, Ehrler is a huge threat, if not, he will be limited.

Other anglers to watch are Oregon’s Jay Yelas, who has always been extremely versatile. Dave Lefebre, who is known as a shallow water angler, but having much experience in deep water finesse fishing on Lake Erie, Lefebre could put it together as well. Of course, there is the human top 10 maker, Andy Morgan to consider; but, he too is especially good with heavy rods in his hands.

Finally, what are the chances of a Scott Martin repeat? The 2011 Cup Champion proved that he could fish deep in winning at lake Ouachita last year. However, those were largemouth bass and with Lanier’s population being heavily weighted towards spotted bass and light line fishing expected to be the primary approach; we don’t expect Martin to repeat. He struggled in the 2010 version, weighing only one fish, and that helps us say he is an extreme long shot to repeat.

Advanced Angler will be on site at the 2012 Forrest Wood Cup with our unique brand of coverage. Forrest Wood Cup Raw will begin Wednesday evening as we will talk to several competitors from the pairings meeting and get their take on the week of practice and how their feelings are heading into the biggest week of their year.