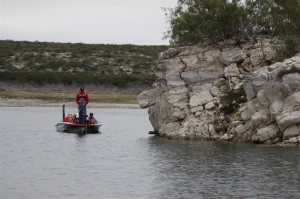 The made for television event dubbed The Challenge Cup presented by Busch Beer, had been; and continues to be in some aspects, shrouded in secrecy as to the location, format and the intent of the venture between The Outdoor Channel and a group of anglers who had united to bring the concept to fruition.

When the announcement of Major League Fishing hit the Wires, there was some confusion as to the nature of this new creation. Was it the beginning of a new tournament organization? Was it the establishment of the upper echelon of tournament pros trying to split themselves off from the other major tours?
The reality of Major League Fishing is that it is purely a television show. Much like any other fishing show on the market today, Major League Fishing is filmed in advance, with a concept that is built to highlight the competition aspect of bass fishing, as well as the competitors who contested it.

The anglers that participated in the inaugural Major League Fishing event represent some of the sport’s most successful anglers, and as such they have built a significant fan following that would likely be the core audience for the television shows. 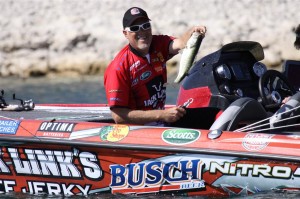 Having been a part of the crew that was on site at Lake Amistad last week for the first of what the anglers and The Outdoor Channel hope to be many more events. I got to see what Major League Fishing is intended to be. I’ve been sworn to secrecy as to the results of the event, and I’ve signed a confidentiality agreement to that fact, but I’ve been given the go ahead to discuss the format, the technology, some of the plans for the future and what effect the format had on the anglers.

Major League Fishing Format
With the 24 anglers that were slated to be the competitors in the first MLF, there were three elimination days featuring eight of the anglers, they cut the field to 12 for the two semi-final, sudden death rounds and they took four to the finals.

Lake Amistad was also divided into zones that the anglers were confined to for that particular fishing day. The anglers were also restricted to only being able to fish on the U.S. portions of the waterway.

Each of the six competition days were divided into three periods. The anglers started their day at7:00AM, when they were allowed to drive to the border of the fishing zone for the day. Once the clock hit 7:15AM, they had 15 minutes to scout the zone looking for their fishing spots; at 7:30, they could make their first cast.

They would fish from 7:30 until 10:00AM, at which time they had to retreat to the rendezvous point for a half an hour break to allow for camera transfers and maintenance. At 10:30 they could return to their fishing until the next break at 1:00PM, when they returned to the rendezvous. At 1:30 they could resume fishing until 4:00PM, when the day was over and they returned to the ramp for the end of the day.

In the three elimination rounds, the top four anglers from each day qualified to head to the semi-final rounds. Then, the scoring format changed. The format became a sudden death qualifier, and the first two anglers to reach a specific weight qualified to move to the finals; which was a cumulative weight day as were the elimination rounds. The three period format was retained throughout the entirety of the event. 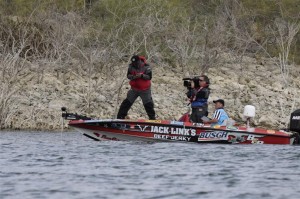 Anglers could also suffer time in the penalty box for certain items on the water. Unsportsmanlike conduct, encroachment, and even breaking off a fish earned an angler time in the penalty box. For example, the penalty for breaking off a fish was one minute. During that time, the angler could not eat, re-tie or sort through tackle – they merely had to sit in the boat. One angler who broke off a fish told me that it was one of the longest minutes he’s ever gone through in his life.

The Sudden Death goal weight was decided by averaging the total weights of the second place anglers from each of the three elimination rounds, the organizers then added two pounds to the total; coming up with the weight anglers would have to reach to make the finals.

Each angler had an official in the boat, and when a legal, 14-inch bass was caught, the anglers weighed their fish and the angler and judge had to agree to the weight; which was recorded and posted to the leaderboard. The cumulative weight was for each keeper caught throughout the day; in other words, every legal fish counted, and there was no limit on how many fish an angler could catch. There was no weigh-in, when the day reached 4:00PM, the competition day was over. Everyone knew the outcome before they headed to the ramp. 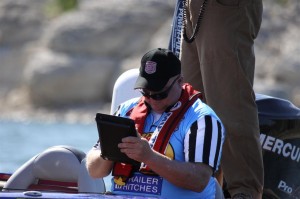 Major League Fishing Tech
I know what you’re asking, “how did everyone know what the outcome was without a weigh-in?” The answer lies in the technology and scoring system put in place during the planning. The angler and on board officials weighed each fish on Boga Grip scales; which are IGFA Certified and accurate to within a 1/4-pound. If the 1/2-pound mark was not clearly visible when the fish was weighed, the angler was credited with the 1/4-pound. Each fish was immediately released.

While the angler returned to fishing, the official went about recording the score on his iPad app. The app was engineered by the I.T. brain trusts at The Outdoor Channel, and it served as the event’s official clock, the record entering and keeping center and the Leaderboard. That’s right, every angler knew what every other angler had to their credit at all times.

Because so much of Lake Amistad is rural, The Outdoor Channel outfitted each of the boats with satellite systems to keep the iPads connected at all times. The white antennae / transmitter on the rear deck was connected to a modem and a router that had its own OPTIMA Battery to serve as the power source. The iPads were connected to the secure WiFi Network in the boat.

The result was that the anglers knew who was catching them and if they weren’t so fortunate to be at the top of the list, they knew how far behind they were. The whole system created intensity and drama for the anglers like they only face in major championships of their respective tours. But, I’ll get into the effect a little more later. 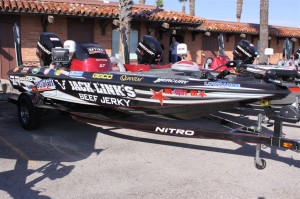 Major League Fishing Equal Playing Field
The whole format was set up to keep the anglers on as equal a playing field as possible. Each competitor fished out of identically rigged Nitro Z7 or Bass Cat Margay boats powered with Mercury ProXS150 outboards. They featured 36-volt MotorGuide Tour Digital 109 trolling motors with OPTIMA Batteries, a Lowrance HDS8 and Mark5x at the console and an HDS7 on the bow. Each boat was equipped with one Pro Series Power Pole on the starboard side.

The boats were wrapped with similar graphics featuring the title and presenting sponsorships of Jack Link’s Beef Jerky and Busch Beer on the side of the hull and the other sponsors above the rub rail. They were wrapped in four colors to identify the individual anglers on a given day; red, black, grey and blue.

The anglers wore jerseys that were color coordinated to their vessels which featured the corporate sponsors of the event on the front, while the anglers were able to place their personal sponsor logos on the sleeves, the collarbones and the lower section of the rear of the jersey.

The waypoints and trails from the previous day were wiped clean from each boat and points outlining the particular zone they were allowed to fish were placed on the front and rear HDS units each night before competition. The anglers also did not receive the Zone they would be fishing until the meeting for their group the night before, and the anglers all signed confidentiality agreements that they would keep the results and the patterns used secret from the other competitors. They used their own rods, reels and tackle. 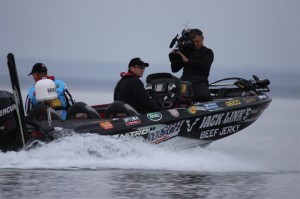 Major League Fishing Results
While I cannot and will not disclose the outcome of any one day of competition, I can tell you that I watched as some of our sport’s most mentally tough individuals felt the pressure of the format of The JACK LINK’S MAJOR LEAGUE FISHING CHALLENGE CUP presented by BUSCH Beer. The effect could be seen from afar as laid back characters and cool customers began speeding up their retrieve, or pulling the bait away from a fish that struck, or made rushed decisions under the pressure of time that they may not have before.

As far as the event results; well, I’ll just have to let you find out later. What I can tell you is that for the first time, we; as fans of bass fishing, will have the opportunity to watch as some of the best anglers in the sport unlock their minds in a competition like never before. When one of our favorite fishing shows or tournament programs air, the anglers have already completed their practice and have a game plan with which to begin. In the CHALLENGE CUP presented by BUSCH Beer, we get to see their thought processes and planning unfold before us, and in some cases, get to watch their minds unravel a little.

Major League Fishing Airing
Now that the gathering of footage is completed, there are plans to release the individual episodes in January on Pay-per-View on the Internet; presumably on the Major League Fishing Website, www.majorleaguefishing.com. The $2.99 shows will be constructed with the hardcore bass angler in mind, while the regular broadcast shows that will air on The Outdoor Channel will be produced with the casual fan in mind. 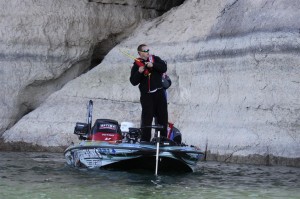 The Pay-per-View is slated to feature tips and tricks and present more of the fishing information that we as hardcore fans and anglers ourselves will get to learn from and emulate ourselves as we venture out onto our favorite lakes each day.

To be there and witness it first hand through the long lens on my Canon was undeniably one of the coolest opportunities I’ve been able to participate in. I can only say that it has a chance to open up entertainment and education in a new way for the fans and the viewers of the sport. I also believe that what we learn through the JACK LINK’S MAJOR LEAGUE FISHING CHALLENGE CUP presented by BUSCH Beer, will help us better enjoy these anglers as we watch them compete on The Bassmaster Elite Series and the FLW Tour. Because now, we’ll have been able to see how they arrive at the game plan we see on the final days of those competitions.