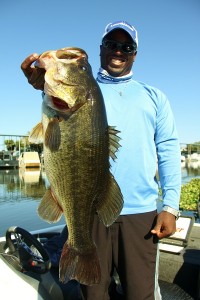 Punching matted vegetation may very well be one of the most exciting ways to catch bass there are.  The mechanism of dropping a heavy tungsten weight rigged with a soft plastic bait through cover that makes a canopy over the heads of bass requires extra stout gear.  The combination of thick, matted vegetation and potentially giant bass means that there is nothing closer to a brawl in bass fishing than this technique.

One of the best anglers on tour with this is Hughson, Calif. pro Ish Monroe.  His ability with a Flippin’ Rod, heavy braid and thick cover has put more money in his pocket than most earn in their entire careers. His combination of Daiwa Steez Rod, Zillion Type R Reel, Braided Line, River2Sea Trash Bomb, River2Sea New Jack Flippin’ Hook, a Paycheck Baits Punch Skirt and Missile Baits D Bomb has become known as his Dropping Bombs Rig.

Today, thanks to Advanced Angler contributor Jody Only, we get a few minutes to sit down with Monroe and hear all of the components that he uses to pursue his Dropping Bombs exploits.

Sit down for a few minutes and let Monroe introduce you to a new technique that is sure to put more, and bigger bass in your boat.