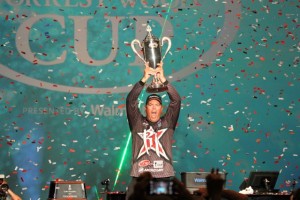 HOT SPRINGS, Ark. (Aug. 23, 2015) – Professional angler Brad Knight of Lancing, Tennessee, crossed the stage with a five-bass limit weighing 11 pounds, 7 ounces Sunday to claim the title of Forrest Wood Cup Champion at the Forrest Wood Cup at Lake Ouachita presented by Walmart. Knight, with a four-day total of 20 bass for 51-12, won by a 3-pound, 15-ounce margin over Ramie Colson Jr., of Cadiz, Kentucky, and won the $500,000 top award in professional bass fishing’s world championship that featured 50 of the best professional anglers in the world casting for the sport’s largest prize.

“This is unbelievable and it still has not sunk in yet,” said Knight, a seven-year veteran of the Walmart FLW Tour who earned the first victory of his career in this championship event. “It is so humbling to add my name to the list of great champions that have won this Cup before. I may never catch another bass again as long as I live, but no matter what happens from here on out, I’ll still be a Forrest Wood Cup champion. To be a part of that club, that is something that nobody can ever take away from me.

“I had such a tough practice,” Knight continued. “We get three days to figure out the lake, and on the second and third day of practice I did not have a single keeper bite. I found an area in the back of Blakely Creek that was the only place that I was confident that I could even get a single bite and that spot turned out to be gold.”

Knight said that the back of the creek had a lot of standing timber and laydowns that he would target each morning with a 6-inch straight-tail worm on a drop-shot rig. As the day progressed, Knight would move out into the main creek and target a deeper creek channel mud flat with a buzzbait. Weather conditions changed on Sunday and Knight said that he made a key adjustment, finding success using a homemade balsa squarebill-crankbait.

“The drop-shot rig was the most consistent each day,” said Knight. “The buzzbait was a big player for me on the first day. Then, today, the wind changed directions and was blowing directly into the creek. It dirtied the water up and the fish got up shallow and were active. I pulled out an old squarebill plug that I hadn’t caught a fish on in five years and that turned out to be my key bait today.” 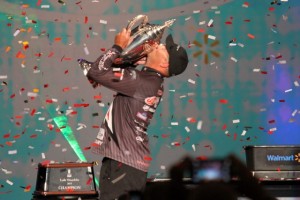 “When you win a Tour-level tournament, that is a career-changer and a great feather in your cap,” Knight said. “But, when you win the Forrest Wood Cup, that is a life-changer. I’ve got a 3-year-old girl who now has college paid for. I can write a check and pay off my house when I get home. The thoughts that are running through my head right now are how I can best provide for my family. This is just a humbling, humbling experience.”

Overall there were 42 bass weighing 94 pounds, 15 ounces caught by pros Sunday. Five of the final 10 anglers weighed in five-bass limits.

The 2015 Forrest Wood Cup at Lake Ouachita presented by Walmart was hosted by Visit Hot Springs and the Arkansas Department of Parks and Tourism.

FLW and the Huntsville/Madison County Convention and Visitors Bureau announced Saturday that Huntsville, Alabama, will be hosting the 2016 Forrest Wood Cup presented by Walmart, the world championship of bass fishing, Aug. 4-7, 2016, on Wheeler Lake. This event marks the first time that the Forrest Wood Cup, the sport’s richest prize, has visited Wheeler Lake.