While the fall can be one of our favorite times of the year to catch bass, it can also be the time of year that a tournament angler finds most frustrating. For the most part, finding bass that are willing to bite is not the issue. Finding the kind of bass that can separate you from the rest of the field can be. 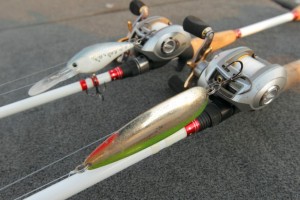 Catching a pile of two pounders when you’re out fun fishing can make for one of the more memorable days an angler and his friends can experience. Duplicating the same thing when you’re competing in a fall Tournament of Championships; not the same thing at all.

Four-time Bassmaster winner Kelly Jordon knows those frustrations as well. However, instead of beating his head against the proverbial brick wall catching dozens of cookie cutter fish, Jordon goes big.

“Sometimes you have to do something a little different in order to make the bigger fish bite,” he said. “A lot of times, those bigger ones are mixed in the same schools as the schoolies, but you have to appeal to them differently.”

Jordon does that with a big lipped deep diving crankbait and a big flutter spoon.

Why Deep Crank and Spoon?
Crankbaits are a standard fare for bass anglers across the country. Look on the deck of most bass boats this time of the year, and you’ll find every squarelip, shallow runner and mid depth runner available in the catalogs. One you usually will see fewer of are deep divers.

Most people assume that all of the bass run the bank and into creeks the moment the temperature drops. However, Jordon looks for those fish that have not yet made their triumphal entry into the fall shad smorgasbord.

“I look for flats leading into or just inside of the major tributaries,” said the Palestine, Tex. pro. “But instead of randomly seeking bites off of the flats, I look for ditches and drains that bass will congregate in, and I target them with a crankbait to locate, and a flutter spoon to take advantage of their propensity to eat bait that is falling.”

Where to Start
Jordon said that he begins his search for the perfect flats around creek mouths. “The shad are moving this time of the year, and the bass aren’t far behind,” he said. “But, it may take a while for them to fully commit and mouths of creeks with flats are the best place to find them.”

He also said that you have to take off your summer trained mind at this point as well. His experience tells him that summer bass tend to hold on the higher parts of structure. Those points, rockpiles, top edges of the ledge and other items that rise off the lake bed. 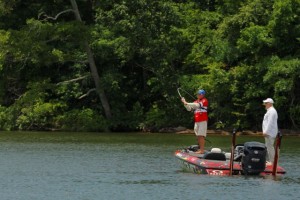 Fall, however, is different in his opinion. “You’ve got to find the deeper structure this time of the year,” he said. “When you do, you have to search to find the bass.”

Cover Water Then Target
Jordon’s favorite bait for locating deep structure bass is a Lucky Craft Flat CBD20 crankbait. He uses the crankbait to locate the bass, and also to get them fired up. “I’ll toss that deep plug until they stop eating it,” he said. “I target the edges and bottom of the ditches and drains to 20 feet until I have them pinpointed.”

Once he has the school fired up, or has gotten enough bites so that he knows their location precisely, he turns to a Big Joe Spoon by Lake Fork lure designer Joe Spaits. “Joe makes the right spoon,” said Jordon. “His is the original, and it is made from brass, so it cast further and has the right fall rate so fish really eat it.”

Go Big Gear
It’s not surprise that he prefers baitfish imitating colors like Gunmetal Shad, or if the water is stained, then he turns to more chartreuse based colors such as Crack. To throw the crankbait, he spools his 6.4:1 Abu Garcia Revo STX with 12-pound-test Berkley Trilene 100% Fluorocarbon line, and he matches it with a Ducket Fishing 7’11 Cranking Rod for ultimate casting distance.

He prefers the six-inch Big Joe, and he like silver with shad colored foil, unless he is in Texas and targeting bass that are gorging on yellow bass (barfish). If that is the case, then he likes the spoon with chartreuse foil on the sides.

For the spoon, he prefers his signature 7’6″ Duckett Fishing White Ice rod that he designed for the spoon application. He matches that with a 7.1:1 Revo STX and 17-20-pound-test 100% Fluorocarbon line, depending on the cover.

Retrieve Tips
Jordon suggested that anglers use a steady wind and go on the crankbait in the fall. He said he prefers to let objects on the bottom create the additional action in the retrieve. His only variance is if he sees a lot of bass follow the bait, but won’t commit to eating it. Then, he uses a stop and go retrieve.

He said he has two ways of fishing the flutter spoon; a hop and a swim. “I hop the spoon and let it fall back down on a slack line if the bass re relating to the bottom,” he said. “But, if the fish are suspending off the bottom, I cast it out past them and let it sink to the depth they are at and swim it through them; that’s a great way to get bites with the spoon.”

His final tip is for knowing how to let the lure fall to the precise depth zone. “If you find a school of fish at 18 feet and want to know how deep that is so you can count the spoon down,” he said. “Find a spot that has 18 feet of water and count it down until it hits bottom, that way you can duplicate the same cast time and again.”

Well, from a man who loves to catch big bass as much as anyone, there are some tips to help you do exactly that, when the fall cookie cutters arrive.