Fall can be one of the best times of the year to catch bass. 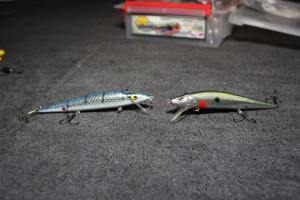 We’ve discussed several ways to catch bass in the fall recently in articles with anglers such as Mark Rose, John Murray, Clent Davis, John Crews and Skeet Reese. We’ve heard the case for several different approaches to targeting bass, the lures to use and how to capitalize on the fall feed.

But, what things can we do to insure that everything is in peak of efficiency to answer the call of the bass when it comes. We thought about that recently and came up with a few lure tweaks and some tips to make sure that you can make the most of every opportunity.
Here are a few things that might help you catch more bass.

Topwater Mods
Topwater can be extremely effective at catching bass in the fall when they are chasing baitfish. Depending on the size of the bait bass are chasing, poppers, walking baits or midsize pencil poppers can be very effective.
On poppers, like the River2Sea Bubble Pop65 or the Lucky Craft GSplash, it is important this time of the year to really keep the bait moving and skittering along the surface. Do this by tying to the bottom of the line tie on the front of the lure.

If you use monofilament line and push the knot to the bottom of line tie, the nose of the bait actually push upwards on the twitch. This creates more of a spitting, skittering action that keeps the lure moving across the surface.

If you are using a big topwater walking bait with three hooks like a River2Sea Rover, Super Spook or Lucky Craft Sammy specifically for largemouth, it can make sense to remove the center hook.

By removing the center, size four treble hook that often comes on these baits, and upsizing the front and rear trebles to size twos, you can actually increase the hookup to land ratio of the plugs. With the big, bony heads of largemouth bass, the larger hooks can actually penetrate their mouths, whereas the size fours tend to grab skin, which can be effective with smallmouth or spotted bass.

Jerkbait Choices
Jerkbaits can be especially good for bass in the fall. However, unlike the early spring where a subtle twitch and pause retrieve is the best, in fall, a steady fast retrieve is usually better. In the spring, baits like a SPRO McStick, a Lucky Craft Pointer Minnow or other suspending jerkbaits are key.

But, in the fall, when bass are beginning to feed up in preparation for the winter, a higher floating bait is better.

Using the new SPRO McStick 115 SF or an original, floating Smithwick Rattlin’ Rogue will allow the angler to fish the bait faster, and in shallower water; which fits the needs for a more aggressive bait in the fall. A continuous slashing retrieve with short pauses will typically produce results when bass are feeding up this time of the year.

Jigs
There are times that bass are holding tight to the bottom in the fall. Like any other time of the year, bass can often become kind of neutral with the passing of a front. When they do, they will often hold off of the first break from the shallow water they were feeding in. A great way to target those bass is with a football jig.

Normally, a standard sized football jig like the Talon Lures Football Jig with a full skirt and a big curly tailed grub would be great for the offshore bite. But, when the weather turns sour, sometimes bass need some coaxing. 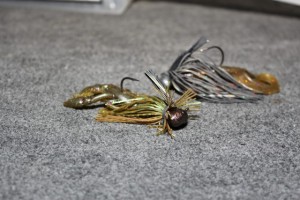 One of the best ways to get bites from fish that have temporarily gone into a non feeding mode is to throw a finesse type jig at them. A shortened skirt, like the one on the Jewel Finesse Football Jig, matched with a straight tail trailer like the Gene Larew Salt Craw, Berkley Power Craw, the Missile Bait Missile Craw or the Eakins Craw from Jewel can create a tasty little snack for bass that aren’t looking to actively feed.

Scaling down on your line size can also help. If bass are not in an aggressive mood, using 12 to 15-pound Sunline Shooter or Berkley’s 100% Fluorocarbon line will help make sure you have great feel, but hide the line from the bass better.

Spoons for Deep Schooling
Bass often school on bait late into the fall, but it doesn’t always occur on the surface. There are times that you will pass over a creek channel, ditch or submerged point and find a cloud of bait being attacked on your fishfinder.
When you see that, a vertical jigging spoon can be an excellent way to catch those bass.

Dropping a 1/2 to 3/4-ounce spoon vertically into the school, then ripping it up and letting it fall back down to the level of the school can be deadly. But, spoons have a way of losing fish. The heavy weight of the jigging spoon can be easily thrown during a fight.

One way to limit lost fish is to add a smaller treble hook to the top split ring on the bait itself. While you have a solid, larger hook on the bottom of the spoon itself, you can attach a treble hook that is one size smaller than the bottom hook to the top split ring, and that hook will often swing around and hook the fish again during the fight. While it does a great job of giving you added insurance for landing fish, it gets tangled on the line during the retrieve surprisingly little. 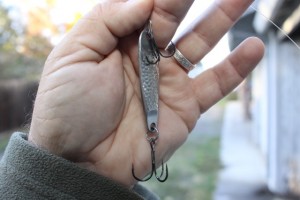 For added attraction, you can even just slide a small feathered treble onto the line loose above the split ring, and when bass are heavily schooling on clouds of bait, this second treble sliding up and down the line can actually draw strikes from a second fish while you are fighting the first hooked fish.

We hope these tips will help you catch more fish in your fall fishing.