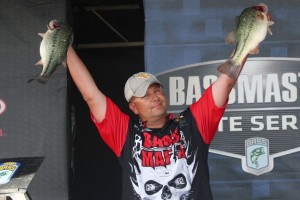 This has been a year of controversy in professional bass fishing. Truthfully, there’s not a year that goes by without some sort of fracas occurring. Whether it is about a stolen fishing spot or some other thing that goes on between pros on the water, something is bound to come up.

This year has been a little different. It started with the Alabama Rig discussion; which was hotly contested on message boards, phone calls, face to face conversations, and eventually competition committees on the major tours. With the Castable Umbrella Rig being deemed allowable on one tour, and not on the other.

Now, we have a new technique to discuss following the Elite Series event on Douglas Lake in Tennessee – “Long Lining or Strolling.” It certainly has created a buzz amongst the pros, and without a doubt, the fans of the sport have already taken to the message boards to share their points of view.

The Holy Grail – 20-feet
Most anglers are aware that a deep diving crankbait can be an extremely effective, and the 20-foot depth range is widely regarded as the magic depth for a deep diving plug. According to Precision Casting a book by Dr. Stephen Holt and mark Romanack (now out of print) there are only a pair of plugs that will reach a true 20-foot depth on a 100 foot cast and 8-pound-test monofilament line. Those lures are a 3/4-ounce Luhr Jensen Hot Lips Express (23 feet) and a 3/4-ounce Mann’s 30+ (22-1/2 feet). 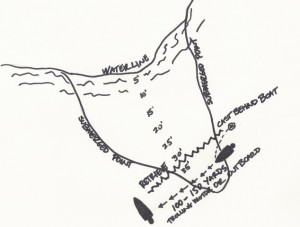 What is Long Lining?
Advanced Angler is all about learning new methods, or improving fishing skills, so let’s start with a little bit of exploring the technique. Long Lining is basically a method of helping a diving lure achieve maximum depth. by using geometry and distance to enable the lure to work past a normal depth for an individual lure.

How the technique basically works is that once an angler locates a school of fish on his graphs, he continues past the school and makes as long a cast as possible past the school of fish. Once the floating lure lands, he leaves the reel in free spool and uses the trolling motor or outboard engine to quickly strip off additional line; as much as an additional 100 yards or more.
The theory is that the lure floats on the surface of the water while the angler lets out enough line to reach what he believes is his desired depth; he then stops the boat, engages the reel and begins his retrieve. The combination of fluorocarbon line (as small as 8-pound-test) and distance of retrieve, allow the bait to surpass the 20-foot depth.

Several of the pros that finished in the Elite 12 at Douglas Lake were reportedly using this technique; including eventual winner Jeremy Starks and second place finisher Britt Myers. Angler chatter has reported that baits like the Hot Lips Express and the Strike King 6XD were reaching past the 30-foot mark, and some even claimed to hit the 40-foot level.

Is Long Lining Legal?
As of the only published rules we could locate at this time; the Elite Series rules from 2009, yes, at its purest form, long lining is considered legal in B.A.S.S. competition. 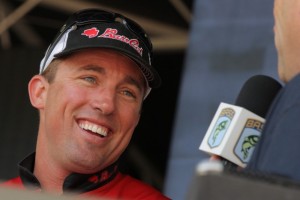 The only mention in the rules about trolling is such “An electric trolling motor may be used for slow maneuvering. However, trolling as a method of fishing is prohibited,” (section C9 – 2009 BASSMASTER ELITE SERIES OFFICIAL RULES OF COMPETITION). The same wording is published in the rules for the 2012 Bassmaster Opens –http://www.bassmaster.com/2012-bassmaster-opens-official-rules.

By definition of Miriam-Webster’s online dictionary, trolling in the pursuit of fishing is defined as “to pull through the water in trolling or to fish by trailing a lure or baited hook from a moving boat.”

There is obviously potential for a grey area to exist if the angler begins to retrieve his lure while the boat is still under the power of the trolling motor, or the outboard engine.

Should it be Legal?
Like the Alabama Rig, Long Lining has already brought the attention of many of the Elite pros. Some anglers we spoke to directly, and others we were able to gather their feeling from their Facebook pages.

Rick Clunn – Taken from his Facebook Page – http://www.facebook.com/rick.clunn – “I was not using the technique strolling that the top several anglers were using at Douglas. ‘ Necessity (to get and keep a crankbait at max depth} is certainly the mother of invention.” I applaud their creativity even though I know it will create a lot of interesting conversation.”

Mark Davis – Taken from his Facebook Page – http://www.facebook.com/pages/Mark-Davis/263699295733SIC – “COMPETITIVE ANGLING HAS REACHED ANOTHER DILIMA. IS STROLLING OR LONG LINING (AS SOME PREFER TO CALL IT) A PROPER TECHNIQUE? IN MY OPINION, IT IS NOT- AND THIS IS WHY………….

“TROLLING IS NOT ALLOWED IN PROFESSIONAL TOURNAMENTS BUT STROLLING ALLOWS FOR THE SAME RESULTS. THE END RESULT IN STROLLING IS GETTING A DIVING CRANKBAIT TO DEPTHS NOT OBTAINABLE BY A CONVENTIONAL CAST AND RETRIEVE METHOD.

“THROUGH OUT MY CARRIER MY FORTE AS A ANGLER HAS BEEN FISHING CRANKBAITS ON DEEP STRUCTURE. I HAVE TAKEN PRIDE IN THE LENGTH OF MY CAST AND DEPTH I CAN TAKE A LURE TO WITH A CONVENTIONAL CAST AND RETRIEVE METHOD, THIS REQUIRES SKILL AND HARD WORK – THAT IS WHAT PROFESSIONAL ANGLING IS ALL ABOUT. WHEN STROLLING A ANGLER CAN CHOOSE TO CAST OR SIMPLY PLACE A LURE IN THE WATER DISENGAGE HIS REEL AND DRIVE AWAY FROM IT BY USING HIS TROLLING MOTOR OR COMBUSTION ENGINE . ONCE YOU ARE 200 YRDS AWAY FROM THE LURE SIMPLY STOP YOUR BOAT AND WIND IT BACK, ACHIEVING A GREAT DEPTH WITH A LURE SUCH AS A STRIKE KING 6XD. BY CASTING I CAN TAKE THAT LURE 18-19 FEET, STROLLING TAKES IT 30 PLUS FEET.

“I KNOW THE RULES STATE NO TROLLING ALLOWED , IT ALSO STATES BASS MUST BE CAUGHT IN A CONVENTIONAL MANNER. IS STROLLING CONVENTIONAL? SHOULD IT BE ALLOWED IN PROFESSIONAL TOURNAMENTS? I CERTAINLY DON’T BLAME THOSE ANGLERS FROM LAST WEEKS B.A.S.S. EVENT FOR USING THIS METHOD, IT WAS BRILLIANT AND LEGAL .

“RULES HAVE EVOLVED OVER TIME . I CAN NAME MANY RULES THAT CAME ABOUT FROM ANGLERS SEEKING TO FIND A ADVANTAGE TO CATCHING FISH. IN MY GUESS THIS IS A CASE FOR A NEW RULE-NO STROLLING OR LONG LING ALLOWED.” 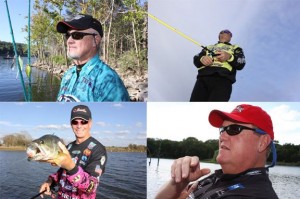 Skeet Reese – “I’ve done it before, but not lot, and I didn’t even think about it at Douglas Lake. Kelly Jordon was the first one to tell me about it, and I know he won his TTBC Championship with it. I’ve heard that there is the ability to get as much as 10 extra feet out of a crankbait by doing this.

“Rick Clunn said on his Facebook page that he applauded anglers for coming up with something different. I agree, by keeping an open mind and thinking things through, anglers were able to maximize the effectiveness of their lures and equipment.”

Kevin Short – “I was under the impression that “strolling” of any kind was illegal. There has been rulings on the technique in the past because of anglers using a Carolina Rig or a Jig and using the trolling motor to drag their lure around the bottom. Those have already been ruled as illegal; so what is the difference in this case?

“I know they say that they are allowing the line to free spool, and that it is not being pulled through the water. But, even with my super smooth Lew’s Tournament Pro reels, there is drag associated with the spool, and the lure would begin its descent. I give these guys credit for their innovation, but I ultimately believe that there will be a rule against it for 2013 because it isn’t very sporting and there are too many ways to fudge around it.”

It’s not up to us to decide whether it should or should not be allowed in tournaments, however, from the comments above, the bottom line is that Long Lining is certain to be a discussion any time this event is brought up and likely revisited in the offseason.