You know the story. 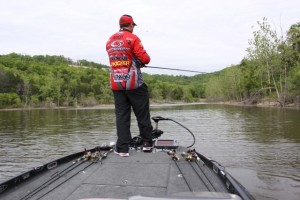 On a school of bass – absolutely pounding them. 15 fish to on a crankbait, 10 fish on a flutter spoon, a couple fish on a big worm. Then, the inexplicable happens – they stop biting. You’ve got all of the new high tech fishfinders and Hydrowave systems mounted on your boat, and you can see the fish there. You know that this school you’ve dreamt about is the one that will win you the tournament.

You need this school to activate. Your experience tells you that you can win if you can just get this massive school of fish to get going again.
Bassmaster Elite Series pro Britt Myers knows what to do – turn to a Shut Down Jig.

What is a Shut Down Jig?
A Shut Down Jig is a jig with a short shank, stout hook and a compact profile that represents a smaller crawdad to bass that have been pressured by the angler himself, or scores of anglers. “This is my go-to bait when the bite gets tough,” said Myers, form Mt. Holly, N.C. “I really don’t like to scale down with a Shaky Head, so I prefer to use a lure I can move quickly and still have a chance at a big bite; My War Eagle Heavy Finesse Jig is that lure.”

The Heavy Finesse Jig is constructed on a 3/0 heavy wire, round bend Gamakatsu hook. It features a round ball head in either 3/8 or 1/2-ounce sizes and it comes with a custom trimmed “lion’s mane type of skirt with the short collar surrounding the head and trimmed just behind the bend of the hook. 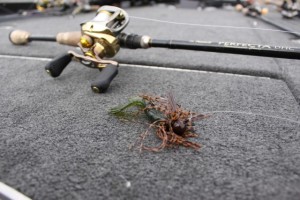 Myers likes to pair it with the three-inch Berkley Chigger Craw to complete the overall profile of the jig. “This thing looks like a little three-inch crawdad, and there ain’t no way a big bass won’t eat it,” said Myers. “I think it gives them a profile that appeals to them, but is small enough to not put them off.”

How to Fish a Shut Down Jig
Myers said that a Shut Down jig can be fished in a variety of ways. “It’s really like any other jig on the market as far as how you can fish it,” he said. “While the profile is really the key to its effectiveness, I have a few tricks I like to use for deciding what to do with it.”

One of the ways he likes to use it is as a skipping jig. “If bass are using the docks and everybody and their brother are skipping full size jigs, I use my Heavy Finesse jig,” he said. “It’s all about the profile in this case.”
If he is fishing a spot like illustrated above, and the fish stop biting, he begins to evaluate the situation. If he feels like there are numerous bass in a school, he tends to hop or slightly stroke the jig. “I’ve seemed to have more success by targeting the competitive nature of bigger schools this way,” he said.

But, if he is faced with fishing for individual bass in isolated locations, he prefers to use more of a drag and shake technique. “I think you have to finesse those fish into biting a little more,” he said.

Shut Down Jig Gear
Because the hook is fairly stout on the jig, it allows Myers to use fairly standard jig gear for the technique. “I use a 7′ heavy action Pinnacle Perfecta casting rod,” he said. “I also use a 7.3:1 retrieve Pinnacle Optimus XLT to help me pick line up quick for a hookset, or for reeling in quickly to make the next cast.” He said he uses mainly 15-pound-test Berkley Trilene 100% Fluorocarbon line. 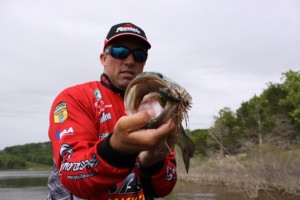 He prefers to keep it simple as far as colors go. “In clear to stained water, I use brown or Peanut Butter and Jelly with a green pumpkin Chigger Craw,” he said. “If the water is dirtier, I go with black and blue; I’m pretty simple.”

Shut Down Jig Proof
Myers said he has documented proof of his Shut Down Jig providing him a boost in Elite Series tournaments. he said that in either of these instances, he would not have finished as high in the events as he did without it.

“One of the times was at Guntersville in 2010,” he said. “I was on a spot throwing crankbaits and conventional jigs and catching them pretty good when they stopped biting. I tried a few other things, but when I picked up my little Heavy Finesse Jig, I caught a 7-pound, 8-ounce largemouth on my next cast.” He finished 24th in that event.

Even more recently was his second place finish at Bull Shoals in the third event of the 2012 season. “He was on a medium diving crankbait bite, but the breezy conditions slicked off on the second morning of the event. “The crankbait had put 12 pounds in my boat in the morning, but I didn’t get a bite on it after the conditions changed,” he said. “I took out my Heavy Finesse jig and culled up to 15 pounds. If I didn’t do that, I don’t finish second at that tournament.” That three-pound difference in weight would have resulted in a nearly $12,000 difference in his payday. 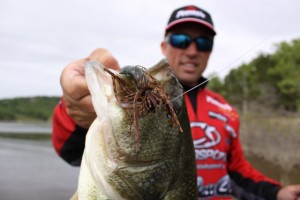 “I know it looks like just any old jig when people look at it,” he said. “But to me, it looks like something I turn to when things are tough, and it represents confidence. I have it tied on year ’round, and I’m not afraid to use it.”