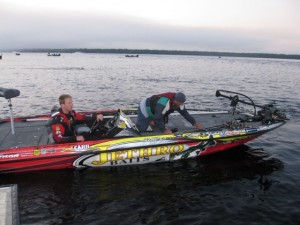 Bassmaster Elite Series rookie Brandon Card has made a splash in his first season on the pro tour. In fact, there are only two other true rookies who have been so high in the Toyota Tundra Bassmaster Angler of the Year standings after four events. Not only is Card currently leading the Elite Series Rookie of the Year race by 38 points, but he is in fourth place in the overall AOY standings, 47 points behind leader Randy Howell.

While he has poured in steady results in his first three events; a 21st place, 41st place and an 18th, he really made his biggest splash at the fourth event last week, Douglas Lake, near his East Tennessee home. Card produced a ninth place finish on what may have been the most interesting and unique event thus far on the Elite Series.

Anglers reported catching their fish in 25 to 40 feet of water, and Card felt right at home in those kinds of depths. While most would consider catching bass in 40 feet of water a recipe for spinning gear, light line and finesse tackle, Card has a different approach.

“I really didn’t use finesse gear all week,” said Card. “Douglas is a little different because of the water clarity, and that allows me to use more conventional lures in a somewhat unconventional way and do well.”
What did Card have up his sleeve, and every time he looks deeper. His aces in the hole are a trio of techniques that most anglers normally associate with water much shallower.

Card’s Deep Stack
Card said he relies on a deep diving crankbait, a Carolina Rig and a swimbait to make bass respond out of impulse in deep water. “If a lake is gin clear, I probably won’t be able to do this,” he said. “But, if the water has some stain to it, I can use these baits and make them respond; I need it to be fairly clear, somewhere between two and four foot of visibility.” 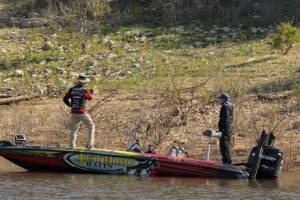 His primary baits are a deep diving Hot Lips Express crankbait, a heavy Carolina rigged Jethro Baits Lizard, and a five-inch Berkley Hollow Belly swimbait with a 3/4-ounce Taylor Man’s jighead he has been working to prototype.
He makes as long a cast as possible with the crankbait, but leaves the reel in free spool, then uses his trolling motor to peel off as much as a total of 120 to 150 yards of line while the crankbait floats on the surface before he begins his retrieve. He said this approach can make his crankbait reach as deep as 40 feet.

He employs a sweep and gather retrieve on his Carolina rig, but says it is important to have a heavy sinker and a floating bait. “I use a 1.5-ounce Jethro Baits Tungsten Flipping Weight for my sinker, and a HotRod Lizard,” he said. “The heavy weight allows me to get the bait down quickly, bu the HotRod lizard has no salt and the bait floats off the bottom better.”

For the swimbait, he allows the bait to touch bottom, then slowly retrieves eight to 10 turns of the handle, and allows the bait to fall to the bottom again. “It’s a retrieve I learned from a friend near home that gets a lot of bites,” he said.”

Equipment
He prefers a 7’11” Pinnacle Perfecta Deep Cranking rod which he pairs with a Pinnacle Optimus XT in 4.7:1 retrieve speed with 10-pound-test Berkley 100% Fluorocarbon line. “You have to have a slower gear ratio to power the crankbait through the long retrieve,” he said. “Trying to use a faster retrieve will wear you out too much.”

Colors
Card believes that bass in deep water are primarily shad chasers, so he tries to choose colors that help him mimic the hues of shad. “I start with a custom painted color that has a pearl belly and a smokey blue back with a hint of chartreuse on the sides in my crankbaits,” he said. “If the bass stop biting that color, I often turn to a Rootbeer colored bait, because I think it really mimics a shad in deep water.”

For the swimbait he prefers to keep it simple. “A swimbait is really a visibility lure, so I try to keep it pretty natural,” he said. “I usually go with the Tennessee Shad pattern in the Hollow Belly.”

His one caveat is the HotRod Lizard. he said that he sticks with green pumpkin, but modifies the bait by dipping the tail in chartreuse JJ’s magic dye. “I always do that in deep water because I think it gives the bait more visibility.” 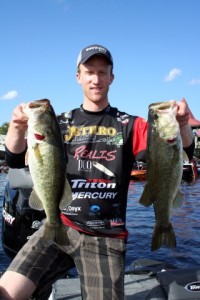 Critical Component
Because fishing in deep water can be a huge time commitment, Card said he will not make a cast if he cannot see fish on his graph. “This isn’t like fishing ledges at Guntersville or Kentucky Lake,” he said. “Those ledges are often only 15 feet deep, so you can spook fish if you try to graph them. If you saw a school there yesterday, you take the chance to fish them for fear of startling the fish.

“But, these fish that are deeper than 25 feet aren’t really going to have a problem with an outboard engine overhead, so I always make sure fish are there before I cast,” he said. “By making sure that these roaming, shad chasers are there, I can minimize lost time with these time consuming approaches. But, if you look deep and give it the right effort, it can be a winning approach.”