The 2011 Elite Series event at Toledo Bend Reservoir turned out to be a breakthrough for Lake Havasu, Ariz. pro Dean Rojas. Not because he won; Rojas had previously been victorious on three other occasions on the B.A.S.S. Tour and Elite level. Rojas figured out something new on the water that would help him catch bass in a variety of situations.

In 2010, Rojas and his soft plastic bait sponsor, Big Bite Baits, began working on a new lure for Rojas to use in his sightfishing exploits. Being known as one of the premier sight fishermen on tour, Rojas often ponders new lures, or new ways to apply lures in the approach. What they came up with was a unique baitfish shaped body that would mimic either a large shad or a bream around the nest. They called the lure the Warmouth. 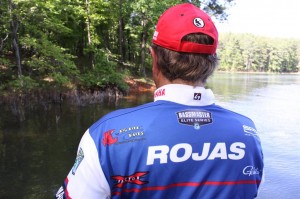 The lure was introduced to the public at the 2011 Bassmaster Classic in New Orleans and it was billed as a bed fishing lure. Designed to be Texas Rigged flat with a 4/0 Gamakatsu EWG Superline hook and an unpegged tungsten bullet weight; the Warmouth had a unique spiraling action on the fall that got bites.

Toledo Bend
The records show that Rojas used a one-two punch to win Toledo Bend. He used a SPRO Hydro Pop topwater lure to cover flats prior to the sun getting high enough to sight fish, then he turned to the Warmouth and his eyes to finish the rest of his 70-pound, 15-ounce limit.

However, he found some areas that he assumed held bedding bass that he would pitch his Warmouth to the openings in the grass on the huge Texas / Louisiana border lake. What he learned would cause him to look at things with a little more open mind when it comes to lure selection.

“I was catching fish in those open holes in the grass,” he said. “But, there were times that I would pitch it to clumps of grass and catch bass there as well.” The light bulb above his head turned on.

The Usual
Flipping baits can be very creative. There are many lures that mimic all sorts of creatures in the water that anglers the world employ for short line bassing. Anglers often use Brush Hogs, Sweat Beavers, Pit Bosses, Paca Craws, Salt Craws , Vibra King Tubes and the list goes on, and on… An exhaustive look at the Flipping lure category and anglers have a choice between creatures and craws; primarily. 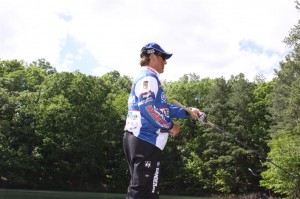 “I always try and search for something different in anything I do on the water,” said Rojas. “I try to put my frog on different places than anyone else, and I’ve always prided myself on trying to think for myself. When I saw what I saw at Toledo Bend; I knew I had something to build on.”

Flipping ‘Gills
From the postspawn through the summer and into the early fall; bass eat bluegill and big shad. In the postspawn period, protection is the reason. In the early summer, it’s because the bluegill have moved into spawn and they are relatively easy for a bass to target. In the heat of the summer through the early fall, they remain shallow and bass can target them until the shad migrations begin for the fall.

It makes sense that an angler would find a lure that mimics bluegills when Flipping. In the past anglers could select colors that mimicked bluegill, but Rojas figured out a way to expand on that. “The Warmouth has both of the shape and color characteristics down,” he said. “It creates an immediate response from bluegill chasing bass, and it can be used in sparse or heavy cover.”

Flip / Punch
Rojas tends to stay back off of the cover most of the time. As a result, he tends to pitch lures at cover, and his favorites are flooded brush and laydowns first, followed closely by sparse grass and finally heavy grass. The one exception is when bass are holed up underneath heavily matted vegetation, and he will get closer and select a little heavier equipment. 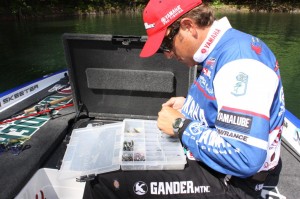 Rojas uses a 7’ medium-heavy Quantum rod and a 6.6:1 retrieve speed Smoke 150 reel that he spools with Sunline Shooter Fluorocarbon in 17 to 22-pound-test, depending on the cover. If he needs to penetrate the heavy grass, he uses the same reel, but upgrades to a 7’4” heavy action rod, and he uses 80-pound-test Sunline FX2 braided line.

His hook choice is the 4/0 Gamakatsu Superline EWG, and he tends to use 3/8 to 5/8-ounce Eco Pro Tungsten weights unless the heavy cover dictates he upgrade to 3/4 to 1-ounce punching weights.

Rigging and Presentation
He said to rig the bait through the flat sides with the Texas Rig for optimum action. Whenever a bass bites the lure, the body has a hook slot in the bottom that most would assume is for rigging like a soft jerkbait. However, that feature is designed to increase the hookup ratio as opposed to rigging.

He also recommends that anglers leave their sinkers un-pegged when rigging as much as possible, because it allows for a much more free action on the fall. “The sinker and the lure actually separate and the lure spirals down behind the weight,” he said. “It has a very enticing action, and it really looks natural in the water around cover.

The Warmouth quickly became a favorite for him around cover. “I found out quickly that it was very effective,” he said. “I almost hesitate to talk about it because it really became a completely new tool for me last year. It was something different than other guys were trowing and it helped me catch more fish toward the end of the season.” 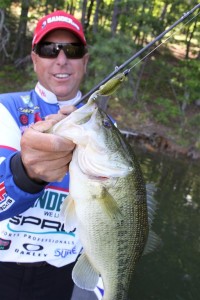