It’s an all too familiar story, you pull up to your best spot as the sun rises on the east side of the lake. Despite your optimism for a great day, you knew it half way through blastoff; yep, you are greeted with three to four foot waves on your best spot. This was the spot that was going to win that tournament for you but, now you have to figure a way out how to even hold on it.

Don’t give up just yet.

The thing to remember is that wind often provides great fishing, and here are several reasons wind improves the bite.  Baitfish get blown into shore and become easy prey for the much stronger swimming bass. It creates a lowlight condition beneath the surface with mud-lines and a disturbed surface which allows bass to easier hide from its prey.  The problem is fishing in the wind isn’t easy.

Any angler can work a bank or rock pile in calm water; in those conditions, holding the boat in position and working the area from different directions is easy with basic trolling motor skills. Add a slight breeze and it gets more difficult to control the boat.  But, add a heavy wind and maintaining boat position becomes a full time task.

The question is; do you run for protection? And if you stick around to fish the spot do you fight the wind or ride the wind? 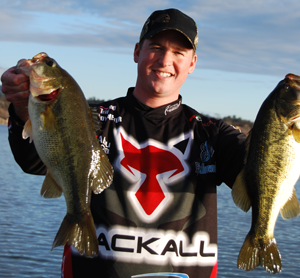 Cody Meyer’s Outlook
FLW Tour pro Cody Meyer said it’s a matter of perspective. “I fish wind like I do a river, or near a dam that is pulling water,” he said.  “In any of those cases I believe the fish position themselves into the current to feed. So I try to present the bait to them coming with the wind.”

The toughest part of this approach is casting into the wind, but Meyer’s said adjusting arm position makes it easier.  “Instead of bombing the overhand cast, try a different approach,” he said.  “If you use a sidearm style to cast it keeps the bait as close to the water as possible throughout the cast, you can be more effective.”

Rod actions become important as well, he chooses rods that allow him to whip the rod tip more on a lower trajectory.  “My rod sponsor, Powell Rods makes actions that allow me to really whip the tip,” he said.  “This helps me generate more tip speed on a sidearm cast, so I can still get pretty good distance and accuracy.”

While many anglers fight the boat, Meyer finds that it’s easier to control the forward movement.  “The good part about fishing into the wind is that it is actually easier to control the boat.  I set the trolling motor speed just faster than the current created by the wind and I hold the boat in position and slowly cover water. This allows me to fish slow presentation baits effectively in the wind.”

An example of going against the gain was a tournament in Oregon.  “I was fishing the Columbia River a couple years back in a FLW Series National Guard Western and I fished down a windy bank and didn’t get bite,” Meyer said.  “I turned around and fished against wind and loaded the boat with 14 pounds.  Literally, this pass was just a few minutes later than the first pass down the same bank, and with the same bait.”

He does make an adjustment if the wind is too strong, he goes with the flow.  “If the wind is too strong to fish into I’ll tie on a spinnerbait or a Jackall Squirrel DD jerkbait or Muscle Deep crankbait and fish downwind,” he said.  “I use the trolling motor to attempt to control my drift, but this is a last resort.” 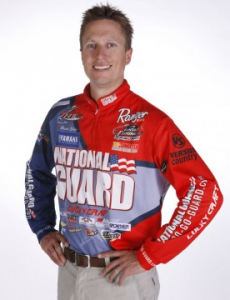 Brent Ehrler’s Take
FLW Tour millionaire Brent Ehrler lets the lure he is using make his choice of direction.  “How I deal with the wind, really depends on what I am fishing,” he said.  “If I am fishing a reaction bait I’ll control drift down wind and cover water with a Lucky Craft BDS 3, Phenix Vibrating Jig or LV500 lipless crankbait.”

His approach is one that is built from necessity.  “It’s just too difficult to cover a lot of water and fish effectively going into the wind,” he said.   “I’ll also use a big heavy jig and pitch it ahead of the boat and let it fall quickly, making it more of a reaction bait.”

One particular situation truly gets his gander up. “If I am fishing along and find wind that is blowing onto a point or bank, or into a cove I’ll definitely fish that area as thoroughly as possible,” he said.  “Fish will stack up in an area like that and they can be really good.  I’ll at least check out areas like that because it can become the key pattern; a couple spots like that can make for an awesome day.”

He looks for less affected areas or changes directions, when he’s forced to slow down.  “If I’m fishing a shaky head, or a Yamamoto Senko I’ll fish into the wind if possible or I’ll look for protected areas out of the wind.” 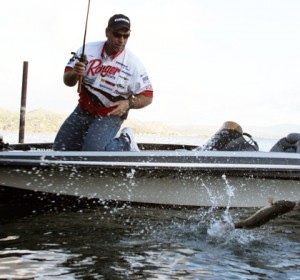 Gary Dobyns’ Theory
Dobyns, who is a reaction bait specialist, thrives in the wind.  “I love when it blows I think the wind is a big advantage to me,” said the 2009 U.S. Open Champion and owner of Dobyns Rods.  “The way I see it, seventy five percent of the anglers in the field will be mentally out of it just because the wind is blowing; which gives me a better chance to win.

He has a certain type of condition in mind, but says any wind will help.  “I prefer a six-inch chop on the water,” he said.  “However, bigger winds can be really good.”

His favorite thing to do is pick up one of his two favorite baits. “When the wind blows I’ll immediately grab for one of two baits, a spinnerbait or a rip bait,” said Dobyns. “Both of those bait styles allow me to fish when and how I like to fish.”  His preference is a Lucky Craft Staysee 90 version 3 and he chooses a Gann’s Stilleto spinnerbait.

The change he makes when the wind blows is to go shallow.  “The surface of the water gets disturbed, meaning there is less light penetration and the fish get active and move shallower,” he said.  That movement is good, because it’s also a lot tougher to fish deep in the wind, maintaining bottom contact can be impossible.”

He said he will go both directions when he’s presented with a breeze, but has a favorite.  “I’ll fish both into the wind and down wind, but I prefer to fish into the wind,” he said.  “When the water is moving so much that fishing into the wind is impossible, I’ll drift and fish down wind.”

While the moving baits are a first priority, he has a second choice.  “A third bait I’ll grab in the wind is a big ‘ole jig,” he said.  “A heavy jig can be fished effectively both into the wind and downwind. I prefer to swim it but, that is not always the case. I’ll throw it out in front of the boat and drag it back while I drift towards it.”

He said it’s worth giving spots a try, even if the wind is blowing hard.  “Even in the big wind I’ll stay and fish in the three and four footers, and I keep a seat in my rod locker just for that situation,” said Dobyns.  “I remember a Clear Lake tournament several years ago, the water was flat calm first day and had an average day one.”

The second day was a different story.  “The wind blew on day two, and it was some of the worst I had ever seen on the lake and I caught a monster sack,” he said.  “I jumped from seventeenth place all the way up to take the win.”

He cautions anglers to take it easy in heavy wind and waves.  “The worst part about the wind is driving in it, which isn’t always fun,” he said he trusts his equipment.  “My Ranger Z521 is a big comfortable ride, and I maintain control of the throttle on my Evinrude E-Tec so that I’m in control.  When I do that I always seem to get where I’m going safe and dry.”

When the wind blows it is harder on the fisherman than it is on the fish. It is not “breaking news” that the bite gets better when the wind blows, but knowing how to adjust your fishing style can be the difference between catching fish and having a miserable day on the water.

Remember, the only thing worse than not catching fish is battling wind for eight hours and not catching fish.  Take it from the best in the business, push shallow and find a way to fish effectively but most importantly get your mind right to deal with the elements and you can take advantage of the wind too.