A State of Transition with Brent Chapman

The early spring is a time of transition.  The weather is in constant flux; sunny one day, cloudy the next.  The day might start with rain and in just a few hours transition to sunshine, followed by foggy evening and morning the next day. 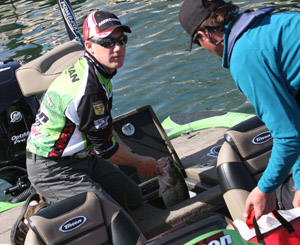 Along with the seasonal transition, bass are also in a state of flux at this point.  Baitfish die offs, weeds dying and fluctuating water levels mean that the only constant; is change.

This is a time for hunt and peck fishing for the majority of anglers.  Anglers often blindly beat up the bank looking for the occasional fish to strike, and the hope is often to run into enough biters to make the day worthwhile.

While many anglers detest the thought of going fishing this time of year; Brent Chapman, a Bassmaster Elite Series pro from Lake Quivira, Kan. loves it.

After many years of beating around the tournament trails in the Midwest, Chapman has found that the bass, like the conditions are in transitions.  Of course, they are in a constant state of change, but that is not what he is referring to.

Chapman feels the answer to the bass fishing equation this time of year is to look in transition zones.

What are Transition Zones?
Chapman said he defines transition zones as some feature of the lake that creates an edge where content of the lakebed combines several different bottom characteristics.   But, he breaks them down even further; by the type of lake he is fishing.  “If I’m fishing a lake like Bull Shoals or Table Rock Lake, I look for one type of transition zone,” he said.  However, if I’m at a place like Lay Lake, then a transition zone would be something entirely different.”

The lakes of the Midwest offer an angler a plethora of steep, bluff banks and boulders.  To Chapman, they represented a scary proposition.  “I used to get intimidated going to places like Table Rock, because it seemed like a needle in a haystack approach,” he said.  “Until I figured out the best places to find bass, then I could start catching them easier.”

What he found was that bass on those lakes related to places on the lake that provide quick access to deeper water, but easy access to feeding zones.  To Chapman, that means channel swing banks.   “If you look at those steep walls that have a river channel sweeping across them, you’ll be able to visualize the transitions,” he said.  “They might have a sloping gravel point on each end, but there is a bluff wall with boulders or shale, and those are the primary areas I look.”

On lakes dominated by grass, Chapman turns to his GPS unit and mapping.  What he’ll look for are creeks that have flats, and a lot of grass.  “Grass, whether it’s milfoil or hydrilla will stop growing where flats drop into the channels, and bass will hold on those edges,” Chapman said.  “The common trend between the two types of waterways is the channel, that’s the most likely place to start looking for bass.” 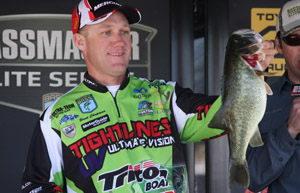 What to Throw on Rock?
Chapman is a mover; he prefers to use lures that can cover water quickly, giving him a chance to put his lure in front of as many fish as possible.  His first choice is a medium diving crankbait, followed by a jerkbait and a jig on the rocky lakes.  He switches to a lipless crankbait, followed by a medium diving plug with a jig and soft plastic punch rig for the grassy lakes.

“I grew up throwing an original Storm Wiggle Wart on Table Rock and Bull Shoals, and they’re probably still my favorite for this type of approach,” he said.  “It’s my first choice because I can make long casts, keep the lure moving, and trigger strikes without a lot of extra movement.”

He prefers to throw parallel to the walls with his reaction baits because of how the fish move.  “What I’ve found is that they suspend off of the walls,” said Chapman.  “They’ll move up against them to feed; then back off almost as quickly as they came.”

He throws his crankbaits on a seven-foot medium action Wright & McGill Co. Skeet Reese Tessera cranking rod paired with a 6.3:1 retrieve Wright & McGill Co. Victory baitcasting reel.  He chooses to throw eight to twelve pound test Gamma Fluorocarbon line, depending on the adjacent cover.  “The cover isn’t so heavy on these bluff walls that I worry about getting hung up,” he said.  “If I feel like I need a little more depth, I can go with the lighter line.”

For the jerkbait, he prefers the original Smithwick Suspending Rattlin’ Rogue most of the time, but has come to trust the SPRO McStick as well.  “I want a jerkbait that has a lot of side to side action, but suspends on the pause,” Chapman revealed.  “The trick is finding how long to pause.  You can often catch them on a standard jerk and pause retrieve, but there are times that the better fish eat it on a pause of as much as a minute; it takes a lot of patience to figure it out.”

If the crankbait or jerkbait doesn’t produce, He looks for cover that enters the water near the transition from sloping bank to the bluff walls and targets it with a pitchin approach.  His choice is a 3/8-ounce War Eagle Flipping jig with a Tightlines UV Beaver as a trailer on the corners of the transition zone.  He chooses colors and size based on water clarity.  “The clearer the water, the heavier the jig,” he said.  “If there’s good visibility, I’ll throw the 1/2-ounce green pumpkin or brown jig.  But, if there’s stain to the water, I switch to a lighter black and blue jig.” 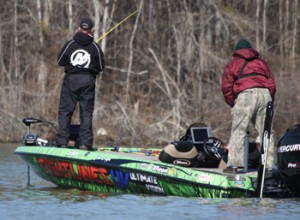 The UV Beaver Trailer is always color coordinated to match the jig, but also provides him bulk, and the added attraction of the UV Colors. “I want a bulky profile, and the UV Beaver gives that to me,” he said.  “It also helps bass find the lure in the water better because of the UV colors.”

Using these three techniques, I can cover water quickly and move on to the next bluff bank; it really helps me find where fish have grouped up and are active.”

Grassy Lakes
While grassy lakes don’t appear to have anything in common with the shelves and bluff walls of home, Chapman still looks at the grass covered lakes in a similar way.  “Bass are edge creatures, and they’ll use inside and outside edges of the grass as migration routes and ambush points,” he said.  “I put my trolling motor in the water and use my sonar unit to locate the creek channels that have grass bordering them; that’s where I start.”

His primary choice for targeting grassy areas is a lipless crankbait, followed by a medium running crankbait and finally the jig and a punching rig loaded with the TroKar TK130 Flippin’ Hook with the UV Beaver.

“I like a lipless crankbait especially because I can move it around the grass quickly, and rip it free when it does get bogged down in it,” he said.  “If we’re in a situation where the fish get conditioned to the lipless, I’ll go to the more subtle medium diver; it seems to generate strikes in a pressure situation.” 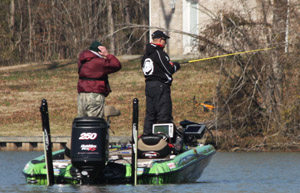 He prefers to use the 6’6” Short Mag Wright & McGill Co. S-Glass Skeet Reese rod for this approach, because it gives him a little more response for snapping the bait free from the grass.  He throws the same 6.3:1 retrieve Victory reel and uses 12 to 14-pound-test Gamma Fluorocarbon, unless the grass is heavy and he needs to use 30 to 50-pound braid.

The flipping setups are not held as backups, but rather as opportunities to take advantage of matted grass.  “He said that there are times that he comes across matted clumps of grass, and he wants to be ready to hit them.  “Those clumps of matted grass can be good for a bonus fish here and there,” he said.  “I don’t typically spend a lot of time doing it this time of year, but if I come across some matted grass, a quick flip or two can produce a good fish.”

Practical Experience
One important rule to remember about grassy lakes this time of year is that the bass can seem to find only one or two creeks to their liking.  “It was like that at the Lay Lake Classic this past year,” he said.  “I searched the whole lake in practice, and the only creek I found that had active fish in it was Beeswax Creek.”

The problem was that several of his competitors located the creek as well, and it forced them to divide the fish.  “I talked to Kevin Wirth and Russ Lane about it, and we all felt like if we’d have been able to have one of the spots to ourselves, we could have won,” he said.  “One of us managed to catch good fish off of one of the points in the creek almost every time we stopped, so if one of us would have been able to let it rest for a while, it could have been really good.” 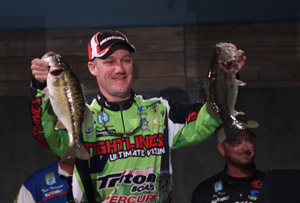 He said anglers should use their GPS to help them stay on fish, but also to know that they are targeting the right area.  “I can catch a good bass on a spot, mark it with my GPS, let the spot rest, come back again a few minutes later, and do the same thing again,” he said.  “Knowing exactly where to find them makes the job of catching them easier when you come back, and they do need a break from the pounding sometimes.”

He said the biggest piece of advice he could give is to encourage anglers to learn to read the transition zones.  “Whether it’s rocky bluff walls on channel swing banks, or grass edges on a creek channel, it’s important to find the differences in the area,” he said.  “You might just see different rocks, but to a bass, it’s their comfort zone.  It might look like random grass clumps, but there is something there that will make bass group up; find it, and you’ll find better results.”