On Top of Postspawn – with Chris Zaldain 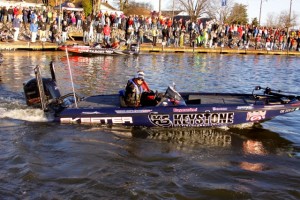 If you’ve ever been around a sports team, you have no doubt been around the aftermath of a game. The players take their time getting undressed, shower, dry off and then head towards the nearest resting area. Most of the time the after game outlook resembles something that looks more like a sloth than a finely tuned athlete.

The worst offenders of this phenomenon would have to be the linemen on a football team. It may not look like it is much in the world of movement, but these men are weary, winded and bruised from smashing into each other for hours. Getting them to get up and do anything the house can be a chore in itself.

Unless you throw some food out there. Throw some grilled steaks, a pizza or a bunch of burgers in front of them, and they will leap off the couch and almost race to the kitchen.

The same can be said for bass in the postspawn period. Big, lazy females have expended a lot of their energy spawning and all they want to do is sit in the shade and wait for the occasional bluegill or shad to swim by that they can gobble up.

Bassmaster Elite Series pro Chris Zaldain, from San Jose, Calif. knows that he can make those fish reach for the groceries by presenting them an enticing offering. “I really like a big, slow moving topwater bait for large postspawn largemouth,” he said. “I speed it up for spotted bass and smallmouth, but a topwater bait really draws the attention of big postspawn females.”

Here’s how Zaldain gets on top of postspawn bass.

Bait Selection
Zaldain said that he likes “big” topwaters, and by big he means those on the larger scale than a small popper or Torpedo style bait. “I really like a big walking bait, and a larger sized popper,” he said. “My favorite baits are the three hook Strike King Sexy Dawg, and the new larger sized Strike King KVD Splash popper; they present the profile I want.” 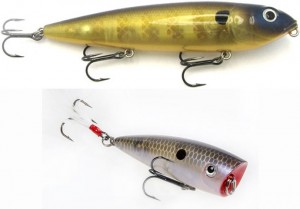 His goal is to present a lure that represents a struggling bluegill on the surface. “Not long after bass spawn, the bluegill get on beds, and the bigger females will often wait them out,” he said. “I choose colors that mimic bluegill as closely as possible to try and appeal to that food source.”

Zaldain’s Topwater Gear
He selects his equipment carefully to enable him to create a system for working the bait, setting the hook and take advantage of technological advancements. “I want a rod that has the right amount of tip, and the right amount of bend to handle the bait and the fish,” he said. “It’s also important because I use braided line for my topwater fishing.”

He starts with a 7′ medium moderate Megabass Orochii XX Flatside Special, a rod built for reaction baits with a parabolic bend. He matches that with a Shimano Core reel with a 6.2:1 retrieve speed which he fills with 40-pound-test Seaguar Kanzen braided line.

“The reel speed is key to keeping the right cadence with the lure,” he said. “If you go to a faster reel, you’ll work it too quickly, but go slower and you won’t be able to catch up to hooked fish; it’s the perfect balance.”

Where to Look
Zaldain said that he begins his search in obvious spawning areas. However, while anglers looking for spawners are typically headed towards the backs of the creeks and pockets, he heads out. “I try to look for spawning flats and start on the outside edge of them,” he said. “I work my way out towards the main lake from there. This allows me to reach the fish looking to eat bedding bluegill, as well as search for those further along their progression.”

He said he primarily looks for isolated cover in these areas. His experience tells him that one of two things might occur on isolated cover. He said he would either find a big, lazy female sitting there looking for an easy meal, or he would find larger fry guarding males that he can target.

When he finds isolated cover, he uses the KVD Splash, then throws the Sexy Dawg in between targets while he is covering water.

Retrieves
He said the optimal word to consider here is “slow.” He said that he uses a slow and steady cadence with the Sexy Dog – for largemouth bass. However, if he is fishing for spotted bass or smallmouth, he finds that a faster, more erratic retrieve is what typically triggers strikes, even in the postspawn.

He uses a pop and pause retrieve with the KVD Splash, which he refers to as his 1-2-1 retrieve. His cadence is to pop it once, allow for a momentary pause, pop it twice and pause briefly, then pop once again and allow to pause for a couple seconds before repeating. “This is much the same as when I use a KVD Jerk jerkbait, and this retrieve really does draw strikes for me. 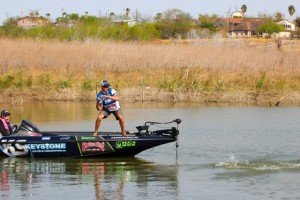 Final Tips
He cautioned anglers to not make the two biggest mistakes that many anglers make when fishing topwater in the spawn. The first is to not get in a hurry, and to not be too aggressive with their hookset.

“I can’t say it enough, you have to slow down in the Postspawn,” he said. “Bass don’t respond to fast moving lures in the postspawn very well.

“Also, you don’t need to set the hook very hard with my system, the fish really hook themselves,” he said. “I merely allow the rod to load up, then I turn my shoulders and hips and just cinch it up tight, that’s all I need to do to have great results on topwater in the postspawn.”