Gerald Swindle tells stories of days prior to turning pro 20 years ago when he’d frame houses in the unmerciful hot Alabama sun, then throw down the hammer he hated late in the day just in time to go chase summer

Two remarkable Toyota Bassmaster Angler of the Year titles later, and $2 Million in career winnings since his house-framing days, Swindle still drops the hammer on summer largemouth, and he graciously shares his picks for three lures he leans on most for the start of summer.

Deep Diving Crankbait – By ‘deep’ Swindle is talking about a diving plug like a Strike King 6XD or Rapala DT16 that will touch bottom in 10 to 15 feet of water before bass get to the mega-depths of mid to late summer.

“You’re trying to locate where those first groups of fish are setting-up after the spawn, and a plug that will get down to 15-feet is not only a great fish catcher – but also a great ‘fish finder’ – plus it’s a lure you can cover a lot of water with,” says Swindle.

Swindle cranks with a 5.3:1 Quantum Smoke HD reel that is geared low enough to tow these larger crankbaits, and it also has a larger spool for plenty of line capacity for the long casts he desires to make with 12-pound fluorocarbon. His rod choice is a highly-affordable new $99 7-foot long medium action stick he just designed for Quantum called a G-Force.

Buckeye Ballin’ Out jig – “This is a lure I’ve made a lot of money on, and I really like it when the bass first finish spawning because it seems like they’re a little finicky after they’ve been pressured up shallow for the past three months. And they’re more likely to bite a smaller bait like this,” reasons Swindle.

Swindle uses these little round-headed jigs in weights of 3/8 to ½ ounce with skirt colors typically involving several strands of brown. His favorite trailer is a Zoom Z Craw Junior in shades of green pumpkin. His line choice is 16-pound Sunline fluorocarbon.

“I also like this little jig for its versatility,” says Swindle. “I can throw it to the edge of a grass line, drag it across a hard rocky bottom, or skip it around a shaded dock, and always feel like I’ve got a good chance of getting a bite.” 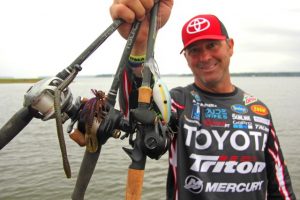 Zoom Magnum Trick Worm – A lot of anglers know that summer and oversized Texas-rigged worms go together like beaches and sunscreen, but Swindle puts a new spin on this time-proven offering by choosing Zoom’s oversized straight tail worm instead of a ribbontail. And instead of Texas-rigging it, he uses a football-style head.

“Buckeye Lures makes ½ to ¾ ounce jig head that’s made for a big worm like that, and unlike a Texas rig, that football head with that straight tail worm won’t twist your line,” explains Swindle.

“It’s a little different than the Texas-rigged worms guys have been throwing since before I was born, and it seems like when the bite gets a little tough you can drag it real slow to maintain contact with the bottom to get a few extra bites,” he says.

He uses somewhat lighter 12 to 14 pound fluorocarbon to help it get down to that 10 to 15’ zone he says is the foundation to framing-up early summer success.