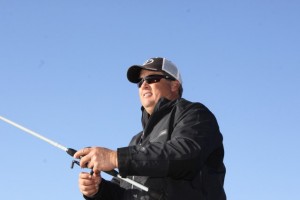 When your name is Terry “Big Show” Scroggins from Palatka, Fla. one might be able to assume that you are a grass fishing master.  The assumption that you were right at home with a heavy rod, braided line and a big weight would be accurate.  One might also assume that Flippin’ and Pitchin’ into heavy, matted vegetation would be your favorite technique for fishing in the summer.

If that is your assumption, then you would be inaccurate.

Scroggins loves fishing offshore for bass that have bunched up and are looking to feed in summer.  While he grew up fishing The St. John’s River near his hometown; and it seems contrary, Scroggins said that his favorite approach for this time of the year was born from his home waters.

“Everyone thinks that because the St. Johns is in Florida that it is a shallow, grass fishery.  It is, but not in the summer through fall,” he said.  “This time of the year it is all about finding offshore sand bars and fishing current.”

He said that it translates well to tour fishing when so many waterways are current related, ledge fishing affairs.  “We haven’t been there much in the last couple years,” he said.  “But, Tennessee River Lakes fish much like home; only deeper.”

We know what you’re thinking, how can fishing a river Florida prepare someone for fishing Pickwick, Kentucky Lake or Wheeler.  Scroggins said it’s  the same overall principles.  “The fish on Tennessee River lakes are current related this time of the year,” he said.  “They sit on ledges and wait for the current to move the food to them.”

He said a tidal river acts the same, only on a schedule.  “While you can beat on them all day when they’re generating power on a Tennessee River Lake, you have a limited time in each location because of tides,” he said.  “I will follow those tides for six hours on a tournament back home just hitting offshore sand bars when the tide is changing on them.” 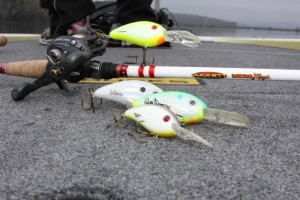 He said he uses a crankbait as his primary approach at home, then adopts the same thing on TVA lakes on tour; he just chooses larger baits.

Crankbait Considerations
Scroggins said that his crankbait rigs are the same no matter the depth.   He grew up like so many youngsters with four or five rods that he had to change lures on.  This meant that a rod

would often throw a spinnerbait on one bank, then a crankbait on the other.  When he got to the point where he could get more rods, he said he realized that his softer cranking rods seemed to lose more fish.

“I started noticing that I wasn’t getting as good a hookset with soft rods, so I started experimenting,” he said.  “I settled on a 7’3″ medium heavy Duckett Micro Magic rod.  it’s more of a multipurpose jig, spinnerbait, frog rod; but, I’m hooking and landing more crankbait fish with it, so I use it.  it might seem a little hillbilly backwards to what everyone says is right, but it works for me.”

He matches that with a Lew’s BB1 in 5.1:1 casting reel, or he will also use the Lew’s Tournament Pro in the 5.4:1 retrieve speed.  “That BB1 is the best crankbait reel I’ve used, but sometimes I just grab the one that’s closest, and the Tournament Pro works great too.”

What to Look For
The most important thing for Scroggins to do once he wants to begin fishing is locate schools of bass.  He said his most important tool in that part of the puzzle is his Humminbird 1198CSI and Navionics mapping chip.  “I’m looking for ledges that have one of three things on it, no matter the depth or location,” he said.  “Whether it’s a ledge on Guntersville, or a sand bar at home; it will have hard cover on it, a turn or end in the offshore structure, or it will have a dip or a high spot; those all hold bass.”

In search of that kind of combination, he scans his Navionics chip to see where the types of components come together, then he uses his Side Imaging to pinpoint it.  “If I can find those things and find bass bunched up on it, I can sit there and catch them for hours if the current or tide is flowing,” he said.  “That’s what I look for, and that’s my favorite type of fishing.” 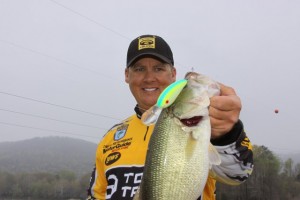 Backup Plans
While he would love to sit there with a crankbait and wail away at fish after fish all day long, he realizes that the program may only last for so long.  With that in mind, he rigs himself so that he can have other things to fall back on.  “I choose big fish lures in a tournament,” he said.  “First I go with a YUM Money Minnow on a 3/4-ounce head, then turn to a big spoon,” he said.  “I don’t like to have to break away from those three, but I also have football jigs, big worms ready.  I even a dropshot ready, but that is my last resort.  if that’s the only way I can catch ’em, I might as well get in my Tundra and start headin’ towards home”

Program Notes
Scroggins said that he always retrieves his lure with the current, and he prefers to make his casts at angles across the structure he’s fishing.  “I make quartering casts across the sweet spots,” he said.  “I always try to make the lure bang into things because most of the time the bites happen when the lure is deflecting.”

With that in mind, his final tip is to try and choose a lure that runs a little deeper than the depth he is fishing.  “If I’m fishing in 15 feet, I try to use a lure that runs at least 16,” he said.  “That way, the lure is scootin’ and bangin’ and defectin’ off of things down there making fish react.

“That’s my favorite way to fish in the summer,” he said in closing.  “A little crazy for a Florida boy, but it works for me, and I always look forward to those types of tournaments.”