IROD, the California-based manufacturer of the most purpose-driven rods on the bass market today, hereby announces that it will add a spinning rod to its flagship Air series which will meet the stringent design standards of Kevin Hawk and will bear his name.

Hawk, winner of the 2010 Forrest Wood Cup and a rookie on the Bassmaster Elite Series trail, is exceptionally versatile but he is best known for his great command of finesse tactics. Indeed, half of the fish he weighed in during his Cup victory on Georgia’s Lake Lanier were caught on spinning tackle. 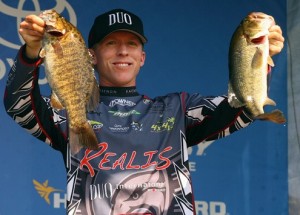 “It’s no secret that a spinning rod is an important part of my arsenal,” Hawk said. “I’ve worked hard with the design team at IROD to deliver a light, super-sensitive spinning rod that can be used for dropshotting, throwing a shaky head and skipping a wacky rig. It’s rare to find a rod that has the right action to do all three, but the Air spinning rod has it.”

IROD has previously introduced signature series rods under the names of noted technicians including Fred Roumbanis, Gabe Bolivar, Marty Stone and Bub Tosh, each of whom has combined exacting standards, design flourishes and extreme functionality to create a class-defining rod at a competitive price. Hawk’s contribution fills a gap in the existing lineup. The 6’10” rod will be listed as model #IRA6102S and will feature the new Fuji tangle-free guides.

“We have had so many requests for an Air spinning rod that we knew we had to add one to the lineup,” said company founder Matt Newman. “But we also needed to take our time and get it right. Thanks to Kevin’s tremendous work ethic, attention to detail and proven track record, there was no doubt that he was the right angler for the job. After months of back and forth, I’m convinced that he nailed it.

The new spinning rod will be available in leading tackle stores and online retailers at the end of June. Be sure to ask for it by name – it may not help you win the Forrest Wood Cup, but it will immediately become a valued part of your daily rod selection.