James Niggemeyer – Love Where I Live Fishing and Family

One of the things I love about where I live in East Texas is that I can fish, a lot.

The fishing opportunities around here give me the opportunity to introduce my kids to fishing the way that my dad did for me. I learned to fish for bluegill under a bobber, then graduated to trout, and on to bass. I’m teaching my five-year-old son Daniel the same way. My daughter Abigail is still a little too young, but I’ll introduce her the same way.

I love that Daniel loves to fish with me, and he’s already identified with it. He likes to watch Bob the Builder videos, and after watching one the other day he said; “Dad, I’m never going to build anything.” When I asked him “why, big guy?” he responded with, “Because I’m a fisherman;” that made me smile, and also made me realize he wants to build something, so we’ll work on that too with my Father-in-Law 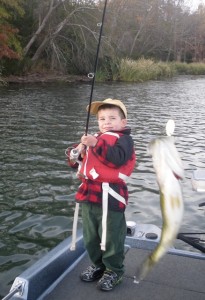 I’m using times like this to re-start my guide service, I used to guide here full time, and I shut it down when I went on tour, but now that the season ends early in the year, I can spend some time on the offseason teaching clients the sport I love.

I also like the fact that so many people hunt around here, because it means I have many of the lakes to myself in the fall and winter. While I can hear guns going off in deer stands over the hill, I’ll be on Lake Fork fishing anyway I want.

None of them were giants, but I did pull one five pounder out of the vines on the new Sunline FX2 braid. I was using the 80-pound-test, which has the diameter of other brands’ 65. I really liked the way it handled, and I love that its smaller diameter, it could be a real advantage for me through the year.

As far as season plans, I’m Really looking forward to getting my new Yamaha Four stroke SHO that will power my 2011 BassCat Puma FTD.. It’s going to be an awesome set up, and of course, it will be setup for shallow water with dual Power Pole’s and everything I need for living in the grass.

I’m really excited about it being Christmas time, mainly because it means I’m home with my family. When Sandy and I got married, we didn’t really go out of our way to decorate too much, but it’s different with kids. We put up all of the decorations and see the excitement in the kid’s eyes and it makes it more fun for me too.

I was driving the other day with Daniel and we were talking about what he wanted for Christmas. He told me he wanted a pair of binoculars and “one of those instruments you play with your mouth,” which I clarified was a harmonica. But he said something that really choked me up, he also asked if I knew what he wanted to give God for Christmas, I asked what it was, and he said, “Me.” I almost lost it.

I’m glad he’s seeing that there’s more to this season than it appears, and that his heart has a spirit of giving.

I feel truly blessed in my life, and the Christmas season reminds me even more; I wish all of you a Merry Christmas.

To learn more about James, visit his website at: www.jamesniggemeyer.com