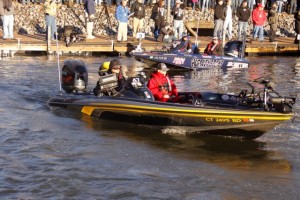 The B.A.S.S. Nation has made some memorable splashes in the Bassmaster Classic. Marlboro, Mass. angler Danny Correia made a run at the 1986 Classic Championship when he finished 13 ounces behind winner Charlie Reed on the Tennessee River out of Chattanooga.  In 1997 Dalton Bobo finished one ounce behind the winner, Dion Hibdon on Logan Martin Lake.

Until this year, when Naugatuk, Conn. B.A.S.S. Nation qualifier Paul Mueller finished second to eventual winner Randy Howell.  It wasn’t just that Mueller finished so high, but rather how he did it that left so many people commenting.

After a dismal day first day that saw him finish almost as far down the field as possible, Mueller came roaring back with a historic day that astounded everyone in the arena.  He worked hard in practice and found areas that he largely had to himself, and put together a program that put him in the Bassmaster Classic history books.

Pre-Practice
After he qualified for the Bassmaster Classic through the B.A.S.S. Nation, Mueller; who is a full-time fishing guide in his home state of Connecticut, began studying the lake.  “The lakes I fish are nothing like Guntersville, so I wanted to spend as much time and energy studying the lake as I could,” he said.  “I also wanted to familiarize myself with as much of it as I could, so I went there in December.”

What Mueller did was spend 12 days driving the lake, learning the layout and fishing a little.  “I spent as much time as I could on my Lowrance HDS and Navionics maps as possible,” he said.  “I basically charted the whole lake in the almost two weeks I was there.”

He said that he looked for areas that had the best concentrations of grass after he did spend enough time fishing to know that the grass was going to play.  What he focused on was trying to locate staging areas that held grass because he figured that grass leading into the spawning areas would be important.

He scouted much of the lake, but said that he felt most comfortable in the northern part of the lake, just below the BB Comer Bridge.  He said that he found the right combination of factors, grass, steep contours and staging areas, that would give him what he expected would be the right combination come tournament time.  He would check other areas when allowed to go back on the lake, but he felt really good about what he found up north. 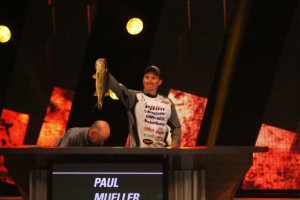 Practice
After he arrived for the official practice period, Mueller found the conditions to be very different.  “It was extremely cold for this area of the country,” he said.  The water temperatures were 36-degrees in some areas, but they started to warm as the week progressed.”

Armed with information from his scouting period, Mueller began trying to refine things by fishing his way through them.  He started hitting a lot of the staging areas and found what he had expected, steep contour lines with grass held quality bass.  “I really didn’t get a lot of bites in practice, but the quality was right” he said.  “The smallest fish I caught was three and a half pounds, and the biggest was six pounds; so I felt like I was making good decisions.”

He fished the first practice day in his middle to upper end, and reported having a decent day with good quality bites.  He moved to the lower end of the lake and found the water dirtier and not having as much grass.  After three-quarters of the day went by, he moved to the mid lake section.

On the third day of practice he went to the areas he thought would be the best, having saved them to allow the conditions to be closest to the event.  He reported catching several fish on a lipless crankbait, and knew he was on to something with his area.

On Wednesday’s official practice period, he decided to look in as many protected pockets as he could, choosing to make sure that he overlooked nothing important.  After a lackluster day that proved no response, he wrote off the backwaters choosing to fish the northern end and the deeper staging areas.

Day One
Like much of the field Mueller arrived on tournament morning to find that his area had been beaten by the heavy winds and rain that pummeled Guntersville the night before.  he reported arriving to his spot and finding it a lot dirtier than he had left it.

It was also warmer.  “I started thinking that the lipless crankbait bite; which was so good in the cold water, was going to die,” he said.  “Then, I got fooled by one bite early.”  The first strike he had was a five pounder that bit his Red Eye Shad, which pulled off near the boat.

He spent most of the day trying to force feed fish the lipless crankbait, and did manage to produce one more five pounder to strike; which he did land.  At 12:20, with only the one fish in his livewell, he decided to try new areas.  When they didn’t produce, he left and went to the bridge at North Sauty, pulled out a Rapala DT-10 crankbait and caught two keepers before having to return to check-in.

He walked across the stage at the BJCC with his three fish that weighed 9 pounds, 10 ounces and left the arena in 47th place. 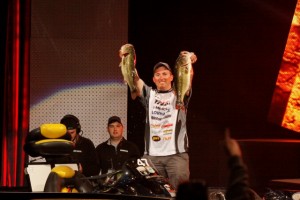 Day Two
He went to the day two takeoff with the thought that he wanted to perform well enough to just be able to make the top 25 cut and fish all three days of the event.  As he sat there waiting for takeoff, he realized that he felt confident that if his area cleared up, he knew the kind of fish he needed to do that were there, so he felt a sense of calm about the day.  It was as he was waiting that a thought crossed his mind.

“It occurred to me all of a sudden that the water was warming and that the lipless crankbait bite was going away,” he said.  “I just had this feeling that I needed to rig up a Chatterbait. So, I went through and started putting different trailers on them until I found one that made me think it would work.”  He said that he feels like God planted the thought in his mind, because a Chatterbait is not even something he typically throws at home.  But, he went ahead and did so anyway.

The fish responded.  he quickly caught a four pounder, then proceeded to fish every inch of his best 100 yard area.  By 10:30, he had 27 pounds in the boat.  With each bit, he waypointed his location, and triangulated his casts so that he could duplicate it.  As he began to pinpoint exactly where the fish were holding, he started to improve.  At 11:30, he caught an 8-pound-2-ounce largemouth – his personal best – and over the next two hours caught a six and a half pounder and another six-pounder to go with it.

At that point, he decided to leave his prime area alone to give it a chance to rest, and see if he could find other areas to fish. with a 3:15 check in, he fished until just after 2:30 to head back to check-in.

He brought his limit to the scales, and when it reached 32 pounds, 3 ounces, he pushed his total weight to 41 pounds, 13 ounces and had accomplished his goal of fishing on day two.  But, he also did a couple other things.  By moving up to fifth place, he made winning a possibility again.  But, he had also set a new Bassmaster Classic five fish weight limit record.

Day Three
While he had the lasseiz faire attitude of just trying to make it to fish on day three, now he knew he had an outside chance to win.  “I figured it would take another 27 to 28-pound day to have a chance, so I knew how I needed to proceed,” he said.  “I was going to spend all of my time in my prime areas and make cast after cast to try to do that.” 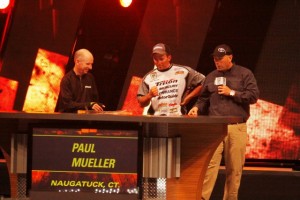 He said he quickly put a limit in his boat, one that included his biggest fish of the day.  However, as the water had warmed, the smaller male bass had gotten more aggressive and he began having to weed through more fish to get the quality ones.  he said he would just begin to think about leaving, but he would get the kind of strike that would make his stay.

He reported having to make multiple casts to areas after getting a short strike to make them commit.  While a tedious approach, he knew that they were better fish because each time that happened, he would cull after catching one.  At 2:05, after pushing it almost as close as he felt comfortable, he caught a five pounder and decided he had better head back to the 2:45 check-in.

He had not weighed his fish on the water, and came to the scales thinking that he had between 25 to 26 pounds.  He needed 25 pounds, 12 ounces to take the lead way from Randy Howell, but, they weighed 24 pounds, 11 ounces and he settled in second place, exactly one pound behind Howell at 66 pounds, 8 ounces for the event.

Techniques and Equipment
He caught fish he weighed on three different lures in the event, but the Chatterbait was his only producer on his record setting day, and on day three. 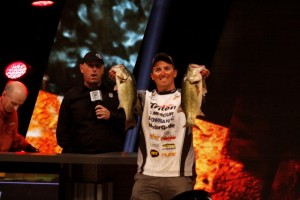 Hindsight
Mueller said that he feels really good to have fished all three days of the Classic; especially after being so far out of it after day one.  “I could have just as easily been out of it and packed up going home,” he said.  “But, I was so blessed to get the right bites and to even be in contention to win on the final day was amazing.”

He also said that he has the fever to get back.  “I’ve got the taste of it now; the Classic is a rush you’ll want again and again,” he said.  “I’m already trying to figure out how to get back.  My plan is to fish the (Bass Pro Shops Bassmaster) Opens and win one to get in the Classic next year, and get high enough in the points to qualify for the Elite Series for 2015.

“I feel like this event will open some doors and help sponsors know who I am,” he said.  “I know that God will help lead me to the right people who I can work with to help reach my goals, but will also be partners that I can work with for a long time.  This has been an unbelievable experience and I hope to be back here soon.”