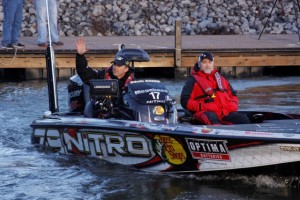 Edwin Evers at Day One Takeoff – photo by Dan O’Sullivan

In looking at the performances of those at the top of the leaderboard at the 2014 Bassmaster Classic, one thing becomes obvious.  The angler who produced most consistently was Talala, Okla. pro Edwin Evers. That is not surprising when you factor that Evers has been one of the most consistent anglers on the planet for the past several years.

It has been consistent with the flair of dominance as well.  While he has won eight different B.A.S.S. events, Evers has won an Elite Series event in each of the past three seasons, and he has been in the thick of the Toyota Bassmaster Angler of the Year race several times as well.

In fact, the only thing that held Evers from being the one holding the trophy on Sunday at the Birmingham Jefferson Convention Complex were the miraculous exploits of the first and second place finishers.

His performance was put together by having the kind of practice that did not produce a lot of bites, but that gave him a lot of information with which to build a game plan, and by his ability to read the water and make adjustments.

Pre-Practice
Evers said that he wanted to keep an open mind in preparing for the tournament, so he did that by not going to Guntersville for even one day to scout the lake.  “I wanted no preconceived notions when I went there for practice,” he said.  “I didn’t look at fishing reports, make any calls to anyone or look for any kind of fishing information.”

He did keep track of the current conditions however.  He reported keeping a close eye on the weather conditions.  “I watched the temperatures to see how the weather trends might be affecting the lake,” he said. “I started doing that in December all the way through heading there for practice.”

Practice
Evers’ approach for practice was to try and cover as much of the lake as he could.  He reported starting at near the dam and working his way 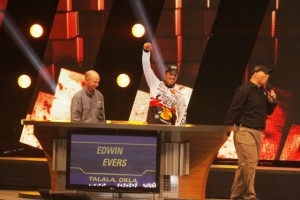 upstream on the first day of practice.  He said that he only received a few bites, but that one area really made him feel like it could be a player in the event.  “I really felt strongly that Siebold could factor into a strong finish,” he said.  “I felt that it was an area that I needed to keep in the back of my mind.”

He targeted the middle section of the lake on the second day of practice, and got quite a few bites, and even caught a few keepers.  One of the areas he located produced a few three and four pounders, but it also produced a six pounder.  The area was promising because in looking at the long range forecast for increased winds and the possibility of heavy rains bringing mud, he felt the area was protected from that.  “What that day really did for me was help me find a bait I felt strongly about, and it helped me figure out an area that I felt confident in,” he said.  “Those were things that I could build on.”

He set out on the third practice day to expand, and only had two bites all day.  He said that while he did not get the kind of action he’d wanted, the bites did tell him that the fish were moving shallower and with the conditions coming, he could expect more fish to be moving in.

He spent more time in the area on Wednesday’s official practice day, and found an area that held a large school of fish that he could see on his Lowrance.  Holding the fish in the area was some healthy grass growing up two to three feet off the bottom and some new growth of milfoil in the area as well as some eelgrass.

“That whole area was protected too,” he said.  “So, I didn’t think that those fish would be going anywhere but into the spawning areas.” 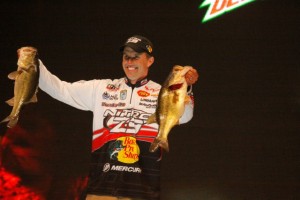 Day One
While he had an area and a basic pattern that he felt was going to produce, Evers felt nervous about the size of the fish that were in his areas.  “You never truly know what size of fish is in your area until the tournament begins and you can really set the hook and figure it out,” he said.  “Until that, you are trying not to put too much pressure on the fish, and you’re trying not to really set on too many.”

With that in mind, the first fish that Evers put in the boat on his first stop was a 7-pound, 4-ounce largemouth that bit a lipless crankbait in the first 15 minutes of the event.  he said that he went on to quickly fill his limit and cull up to his total weight in that general vicinity off of Goose Pond by noon.

After that, he ventured around the general vicinity, but was unable to upgrade, or learn anything more that would help him expand.

Even though he could not improve any more, he came to the scales with 26 pounds, 13 ounces; putting him in second place, less than a pound behind day one leader Randall Tharp.

Day Two
He returned to the Goose Pond area and began fishing.  Yet, while he was greeted early with solid bites and consistent action, he said things were much different on day two.  “I would call it brutal slow,” he said.  “It really took a long time to get the first bite, and instead of being able to focus on the lipless crankbait, I had to go to other baits to fill my limit.”

With the bite slowing down, Evers said that he did quite a bit more moving than he probably should have.  “I started to wonder if my primary area needed a little bit of a rest, so I started running around quite a bit,” he said.  “It wasn’t until I settled down and went shallow that I got my first bite.”

That fish came on a vibrating jig with a Megabass Spark Shad as a trailer, but he would spend until the last 30 minutes of the day trying to fill his limit.  he would do so, and while he reported the day being a “real grind,” he came to the scales with 20 pounds, 9 ounces to push him into the lead with 47 pounds, 6 ounces over Randall Tharp by one ounce.

Day Three
Evers said that he had what he would consider a “great day” on the final day of the tournament.  He reported making many good decisions and 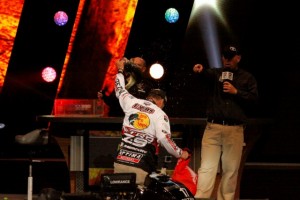 fishing very cleanly.  “I ran a ton of new water and really made some good decisions that I felt great about,” he said.  “I only had one 15 minute period of the day that I wish I’d have hit a little differently, but other than that, the day was great.”

That 15 minute period happened to be what he feels cost him the chance to win the tournament, and it was nothing that he did.  He entered one of his primary areas at a time when the wind wasn’t blowing and the clearing water had turned slick calm. In that short time, he had a six pounder bite the back of his crankbait at the boat and straighten his treble hook in the brief fight, he had a five pounder swipe at his vibrating jig but miss and a second five pounder grab the back of his vibrating jig and pull the trailer down on the hook.

“If I had hit that spot 15 minutes one direction or the other, I catch one or all of those fish,” he said.  “Without the breeze to break up the water, they got too good of a look at the bait and didn’t commit to the strike; if I catch any of those fish, I probably have enough to win.”

He brought 18 pounds, 5 ounces to the scales, and finished third for the event with 65 pounds, 11 ounces.

Techniques and Equipment
He weighed fish on four different lures throughout the event. he utilized a Megabass Flap Slap in Megabass Sexy Shad, a green pumpkin Vibrating Jig with a Megabass Spark Shad for a trailer, a Megabass Knuckle 60 crankbait in Bahama Milk Pearl color and a custom painted Pearl Shad lipless crankbait as well. 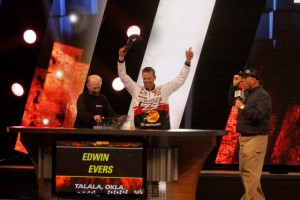 His vibrating jig was thrown on a 7′ heavy action Bass Pro Shops Carbonlite rod, with the 5.2:1 Pro Qualifier reel and 20-pound-test XPS Fluorocarbon.

He used a 7′ medium-heavy BPS Crankin’ Stick with a 5.2:1 Pro Qualifier reel and 14-pound-test XPS Fluorocarbon for the Knuckle 60.

The lipless crankbait was used on a 7’6″ medium-heavy Bass Pro Shops Crankin’ Stick matched with a 7.1:1 Pro Qualifier reel and 17-pound-test XPS Fluorocarbon.

Hindsight
Evers said that he has mixed emotions about the event as a whole.  “I maximized everything I was doing in the tournament and really fished a pretty strong event that I can be proud of,” he said.  “But, obviously, I’m disappointed I didn’t win.  But, it is really hard to beat a guy who weighs a 29-pound bag on the last day of the Bassmaster Classic; congratulations to Randy Howell.”