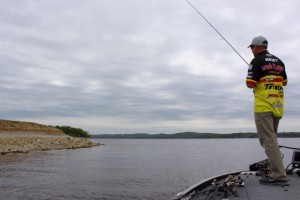 Without a doubt, one of the best and most consistent ways to put fish in the boat is to throw a shaky head and a finesse worm. It doesn’t matter if the water is stained or clear, deep or shallow, if the lake is highly pressured, or there is only one boat on the water; there is something about the jighead and worm that just produces bites.

One of the best anglers in the business with a shaking head and finesse worm is Ardmore, Okla. pro Jeff Kriet. The “Squirrel,” as he is known amongst his friends and fans of the sport has made this style of fishing his namesake technique. In fact, a large portion of his career earnings has come on a shaky head.

“A shaky head is one of the most consistent fish catchers there are,” said Kriet. “If people are fishing it right, then they are going to get a lot of bites, and they can still win tournaments and finish very high in the standings fishing a worm. In my opinion there aren’t too many times that its bad to throw a shaky head.”

When to Throw a Shaky Head
Kriet said that he thinks a shaky head is at its best when he is fishing water that is clear to heavily stained on lakes that are not choked by grass. “I can use them just about anywhere other than grassy lakes,” he said. “Too much grass makes it too hard to fish, they get gummed up and you can’t fish it effectively.”

The only time he said he feels he is at a disadvantage fishing a Shaky Head is when it looks like it will take 25 pounds or more a day to win a tournament. “Those kinds of tournaments are usually won on swimbaits or other larger lures, so a Shaky Head is not as likely to draw those bites,” he said. “But, everywhere else and just about any other time I fish a Shaky Head.” 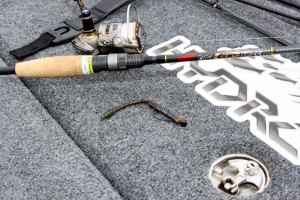 He said he often uses it as his search bait when he is searching for spawning bass in the spring. “I throw it out and pull it back to me while I’m scanning the shoreline for beds,” he said. “I’ve caught some really good fish while using that technique.”

Squirrel Gear
His sponsors know how effective Kriet is with a Shaky Head. So confident are they in his proficiency, that many of them made products based on the specs he desires for his technique. He outfits himself with a 7′ Falcon Jeff Kriet Squirrel Tail Rod paired with an Abu Garcia Revo Premier spinning reel. He keeps several of these setups at the ready, and chooses line by the way he is fishing them.

If he is fishing 15 feet deep or shallower, the Oklahoma pro opts for a braided line for his main line and ties it to a fluorocarbon leader. If he is fishing deeper than 15 feet, he switches to straight fluorocarbon. His reasoning is that braided line floats, so if you are making casts into deeper water, it creates a bow, or a lift in the line. When he does use the braid to fluorocarbon connection, he uses 10-pound-test Hi-Seas Grand Slam Braid and chooses an 8 to 10-pound test length of Hi-Seas 100% Fluorocarbon depending on the water color. his choice for fluorocarbon only is 6 to 8-pound-test Hi-Seas 100% Fluorocarbon; again, depends on the water clarity. 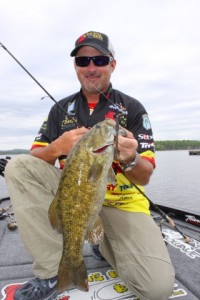 He worked with Jewel Bait Company to design his signature Squirrel Head; which features a uniquely shaped standup head and a custom fine wire finesse hook. He said that he likes to use as light a head as he can, choosing an 1/8-ounce size 80 percent of the time, a 1/16-ounce version in shallower water and a 3/16 when he needs a little more weight in the wind. “That’s one of the mistakes I see people make,” he said. “You get more bites with the lighter heads.”

For worms, he uses two. His first choice is the Big Bite Baits Squirrel Tail worm, most frequently, the four-inch version. However if there is a very high pressure situation or he is fishing ultra clear water, he tends to lean towards his Shaking Squirrel by Big Bite Baits as well. His favorite color in the Squirrel Tail is tilapia, and he dips the tail in chartreuse dye. He likes the thinner construction and more natural colors available in the Shaking Squirrel for clear water.

Fishing like a Squirrel
Kriet said that fishing a Shaky Head is easy, if you listen to him. “The keys are to not fish it too fast, but to be efficient with the time,” he said. “You don’t have to work every inch of a bank. I pull it along quickly until I feel something solid on the bottom and then I shake the worm thoroughly up, across and over the cover, that’s when most of my bites happen.”

He also said that anglers tend to use to tight a line when fishing a Shaky Head. “You have to leave a little slack in the line,” he said. “Not slack on the water, but semi-slack so that you don’t pull the bait forward while you are shaking it. It’s got to stay in contact with the bottom in order to be effective.”

He also said to be gentle with hooksets. “Anglers don’t need to do a slack line hookset with these,” he said. Just reel up the slack and pull the hook into the fish, they are a really fine wire hook and penetrate easily.” 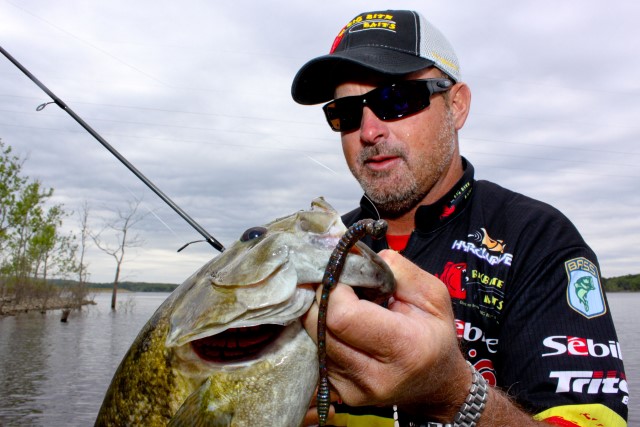