Of JT Kenney’s 28 FLW Top-10 finishes, more than one quarter of them have been within the state of Florida.  Because many of the Sunshine State’s lakes are spared from the vegetation die-off many northern waters experience over winter, flipping is a favorite prespawn technique for many successful anglers.  To say that Kenney knows a thing or two about that bite would be an understatement.  Since 2001, the Palm Bay, Fla. pro has carefully refined a system to presenting, triggering, and catching Florida Strain largemouth, the most finicky strain of bass in the entire country. Here’s his approach… 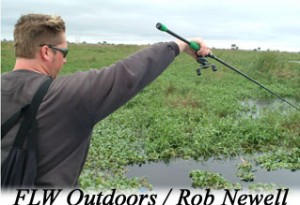 Rule #1: Don’t Overlook Junk Cover
Matted vegetation is synonymous with Florida fishing; however, Kenney admits that he does not place a great deal of importance in finding healthy surface weeds.  He maintains that quantity; rather than quality, of cover reigns supreme when bass select a suitable springtime sanctuary.

“The number one thing I can tell you is don’t get set on finding green hyacinths, pennywort, or some other specific type of weed,” he said.  “I’ve had too many good days flipping what I would call blown-up junk, cut-up grass and other weeds that collects on the surface against reeds during a strong wind.”

Kenny believes that his “junk” mats are effective primarily because they provide shelter.

“Fish just like overhead cover. It doesn’t matter if it is a boat dock or something natural,” he opined.  “It seems like Florida Strain bass in particular, like to get up under something, especially when they get stressed or cold.”

Rule #2: Keep Your Selections Simple
Kenney keeps his flipping presentation simple in the springtime. For starters, he limits his weight selection to one size: an ounce and a half tungsten sinker. Not only does he believe that a heavy weight provides the vehicle to drive a bait through heavy cover, but he also noted that the speed of the subsurface fall will trigger most of his bites as a secondary benefit.

“I think a lot of success in flipping comes from creating a reaction bite,” said Kenney.  “Some people say, ‘I can punch through cover with a one-ounce weight,’ but they are missing additional bites by doing that.” 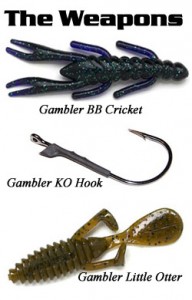 “When the water temperature is on the drop, I like the Gambler Cricket. It is an effective, subtle bait without a lot of flappers or appendages,” he revealed.  “It has some small legs and claws, but they don’t create excessive commotion.”  When the water is warming he goes another direction.   “I like to use a Gambler Little Otter because it is another simple bait, but with a little more action,” Said Kenney.  “It has two legs that kick and a tail that flaps. I also like the Otter if I feel that the fish are more active, even if the water is somewhat cold.”

A side benefit of the BB Cricket and Little Otter, as Kenney notes, is that their smaller size makes it easier to punch through dense mats of weeds.

Rule #3: THE Knot for Flipping
Kenney presents both baits on a 7-foot, 11-inch G-Loomis heavy action Flipping Stick with 65-pound test braided line and 45-pound fluorocarbon leader. While some braid-fluoro flippers prefer variations of the Albright or Double Uni Knot, he relies on a Snell for affixing the leader to the main line.  He finishes the leader by tying a Uni Knot in the braid and sliding it up to the Snell.  He also uses the Snell knot for his flipping hook.

“I do a lot of saltwater fishing down here, and I’ll tell you that it is one tough knot. I’ve caught snook, 150-pound tarpon, and even sharks using the same knot,” he said.  “An old salt showed it to me a while back, and I’ve used it ever since. The cool thing about it is that since you are cinching the fluorocarbon to the braid, the knot is tight even before finishing the braid with the Uni Knot. Others, like the Double Uni, will cinch together before all of the slack has been pulled out and that will weaken and create play in the knot.”

Kenney also cites the speed of tying as another advantage to employing a Snell Knot during competition. 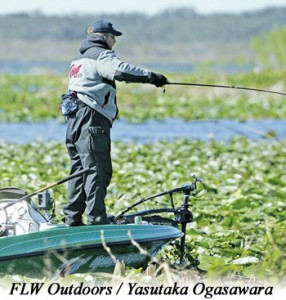 “I can tie the knot in about 20 to 25 seconds, where it can take a couple minutes to tie a Double Uni,” he said.  “It also seems like every third time or so when you tie the Double Uni, it gets messed up and you have to start all over.”

When cutting the fluoro leader to length, Kenny uses relative distances as a reference. First, he sets the leader length somewhat longer than the depth of the water he fishes. Secondly, he verifies that the length is short enough so that the knot remains out of any rod guides when poised for a pitch.

On the “business end” of the leader, Kenney relies on a 3/0 Gambler KO hook. He notes that everything about the hook is heavy-duty: from the welded eye, to the gauge of hook, and to the hook point.

When combined with a Snell knot, Kenney believes that the hook becomes integrated with his line, meaning the hook rotates into the fish on the hook set.   “I call it the pendulum effect,” he said.  “With the line running through the eye and attached to the shank, the hook swings into a proper angle with the point remaining up.”

Rule #4: Practice Sound Mechanics
As much of a factor proper rigging and line tying are, the mechanics of a flipping hook set should not be overlooked. Kenney often observes other anglers dropping their rod tip and subsequently introducing slack into their line – a common cause for missing bites and losing fish. 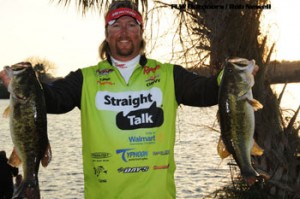 “That is the worst kind of hook set. You will miss them nearly every time doing that,” he explained.  “What I do when I get a bite is reel down to about 9 o’clock, trying to keep slight tension on the line. Otherwise if you let the fish feel the entire weight, it may start to think; ‘that crawdad ain’t that heavy’ and drop the lure”

“A lot of time fish under a mat will swim over and grab the bait before it hits the bottom instead of running off with it.  At that point, I still set the hook as hard as I can, but I initiate the hook set with a tight line,” he said.  “If you drop slack in the line, half the time the fish will drop the lure and the other half of the time you will blow their mouth open.”

“What happens in Florida is that there are windows of opportunity to catch fish during the day,” he said.  “If you are fishing at the wrong time, you can fish right through the biggest school of fish in the lake and not even know it.

He suggested anglers pay attention to the conditions.  “During a cold front, the best time of day to fish is from 4 o’clock until dark. That is why a lot of tournaments in January or February here are won late in the day, he said.  “When it warms up, it is just the opposite. Daylight to noon will be best; I try to adjust my practice schedule to fit those feeding times.”

Be mindful of JT Kenny’s rules, and you too may reign supreme the next time you are on your favorite springtime waters, whether it is in Florida or not.