Kevin Short is addicted to fishing.  When the majority of his Midwestern and Southern Counterparts are coated in face paint, dressed in Scent Lock and perched twenty feet up in a tree with a bow or a rifle in hand; the Elite Series pro is on the front deck of his Bass Cat.  When other outdoorsman are wielding Browning or Remington, Short can be found with a St.Croix and Lew’s combo in his hands. 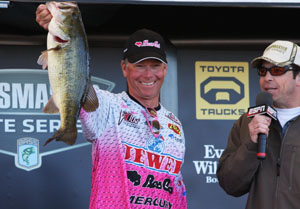 “Winter time is a good time to get out there and fish, especially around where I live,” said Short.  “Most of the world is hunting, so I pretty much have the water to myself and I can go just about anywhere, and catch fish doing it.”

Short said that his best approach this time of the year is to keep things simple.  He believes that there are three techniques that dominate for him, and he doesn’t need much tackle to have a great day.  “I could fit all of the lures I use into one Plano 3600 box and be fine,” he said.  “Of course I don’t, but I still have a very light load in the boat.”

His go to baits include a pair of jerkbaits, a pair of crankbaits, one type of jig and an assortment of soft plastic trailers.  “I like a Megabass Ito Vision110, or Norman Razor Minnow for jerkbaits, a WEC Mutt or Storm Wiggle Wart for crankbaits,” he said.  “My jig for this time of year is a Jewel Pro Spider with some double tailed Zoom Fat Albert grubs.  I can catch them on these, just about anywhere, all winter.” 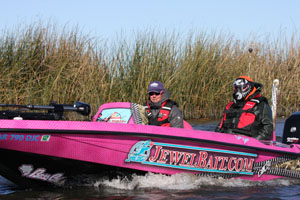 Which One?
The decision of which reaction bait to throw is made easy by one factor; water color.  If the water is clear, Short opts for the jerkbait, if it’s dirty, he chooses the crankbait.  “The reason I choose this way is because bass in cold, clear water tend to suspend,” said the two-time Elite Series winner.  “Bass in cold, dirty water tend to get next to shallow cover, and that makes them better for the crankbait.”

He likes the Megabass jerkbait when bass are eating a bait that suspends with the nose down.  “The Ito Vision 110 rests nose down when I pause, and sometimes bass want that look,” he said.  “When they don’t want that attitude, I choose the Razor Minnow, but I don’t fish it out of the package.” 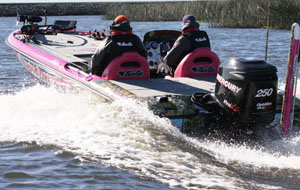 He said the Razor Minnow is the ugliest jerkbait in the world, and one he modifies.  “The Razor Minnow is not what most people look for in a jerkbait, because it doesn’t look like a high dollar Japanese plug,” he said.  “But, when I add weight t the bait it has a very unique action that bass eat.  I add weight to make it suspend, either by upsizing the hooks, adding lead tape to the area right behind the bill, or by wrapping lead wire around the front hook.”

He chooses colors based on water clarity, for clear water, a translucent color such as Jelly Bean or Clear Nutter Shad are the pick.  If the water has a little stain to it, about two to four foot visibility, then he goes with Chartreuse Shad or Gold SX Shad.  For muddy water, he goes with the crankbait.

“I’ve caught a lot on the Wiggle Wart, but I prefer the WEC Mutt,” he said.  “The Mutt is a flat sided wood bait that has a wide wobble and really gets their attention.  It also has a circuit board lip that makes it really tough for slow rolling and banging off cover.”  Because the crankbait is always thrown in water with less than three foot of visibility, the color choices are Classic, Chartreuse Classic and Chartreuse Black Back. 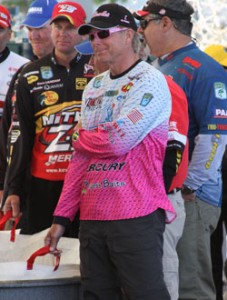 His decision of when to throw the Pro Spider jig is basically when the fish are on the bottom, and he’s fishing rocky bottoms; which he does most of the time in frigid water.   “Rocks holds heat, and that makes them prime targets for holding bass in the winter,” Short said.  “When they are on the bottom, the jig is what I use.  Most people use football jigs, but the Pro Spider comes through rocks better because of its keeled bottom on the head.”
He keeps jig colors simple, opting for Peanut Butter Smoke, Green Pumpkin Purple or Texas Craw, and he uses a watermelon or green pumpkin trailer.  His actual decision of color is based on a very scientifically involved formula – translated – “I let the fish tell me what to throw,” said Short.  “If I’m not getting bites on one, I’ll try another until they eat it.”

Where and How
Short said that he looks for areas that bass will suspend to throw the jerkbait, and he chooses shallow flats for the crankbait.  Both of his favorite areas would include some sort of edge.  “If I find an area that has some vertical cover, or a bluff wall in clear water, I’ll throw a jerkbait,” he said.  “If the water is muddy, and I can find a stumpy flat with a ditch running through it; I’m going for the crankbait.”

The jig doesn’t depend on water clarity as much as having some rocks around.  “If the fish are on the bottom, and around rock, then the jig is what I choose,” he said.  “I scratch that thing all over those rocks trying to make them respond to the slow moving lure.”  He uses a St. Croix Legend Extreme 7’ Medium heavy, fast action XC70MHF with a 6.4:1 retrieve Lew’s Tournament Pro reel and 12-pound-test Vicious Pro Elite Fluorocarbon.

Like most jerkbaiters, Short believes the pause is the key to getting the right bite in cold water on the minnow plug.  “They can be a subtle twitch followed by a lllllooooonnngggg pause,” he said.  “The trick is to not get in a hurry, let that bait sit in their face, and watch your line; you’ll start to figure out how long it takes for a response.” 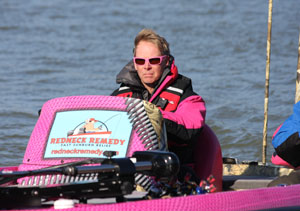 The retrieve is one of the reasons he likes the Norman plug so much.  “The Razor Minnow will actually get to pausing with the tail down once it’s properly tuned,” he said.  “I actually use the rod tip to subtly make the bait kind of rock front to back during the twitch and pause; it really looks like a dying shad in the water.”

He uses the same Lew’s reel, but opts for the St. Croix Legend Extreme XC68MXF, a 6’8” rod that when paired with the reel give him a combo that weighs less than 11 ounces; He uses the same Vicious Flurocarbon in 10-pound test, unless he needs to go deeper or shallower, then he will choose 8 or 12 pound-test respectively.

For the crankbait, he urged anglers to slow down on their retrieve.  “You want this lure to grind through the area making bass have to commit,” he said.  “I want the plug to bang and grind everything, pausing as I hit each major obstruction to allow the lure to float up a little.”  Strikes often occur on the pause, or as the lure begin to move forward again.

To insure slowing down, Short uses a 5.1:1 Lew’s Tournament Pro, which he pairs with a Mojo Bass 7’4” Glass medium moderate cranking rod and 15-pound-test Vicious Fluorocarbon. 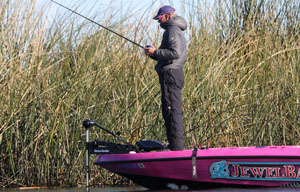 Final Tips
Short urges anglers to prepare for the cold conditions, first by dressing appropriately in layers, and secondly by preparing themselves to fish slowly.  “I learned how to dress by working with a local shop called Ozark Outdoor Supply.  They stressed to me the importance of not only dressing in layers, but the right layers.

He said many people get all synthetic materials for their layers today, and it creates for reduced mobility.  “Polypropylene and Performance Fleece actually bind together making for an uncomfortable day,” he said.  “They helped my learn to use wool as an under layer, then use the synthetic fabrics so that they move properly.  Either way, anglers need to alternate their fabrics on their layers so that they do not bind.”

“I just want people to understand that they really need to fish slowly, and to pause their jerkbaits for a long time,” he said.  “It takes a lot for most people to get used to, but when they are comfortable, and don’t get in a hurry, wintertime fishing can be quite good.”