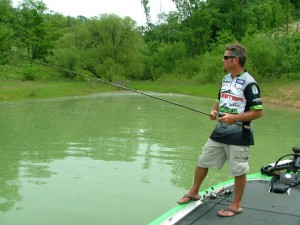 Elite Series pro Clark Reehm has all but eliminated monofilament line from his day-to-day arsenal, relying on fluorocarbon and braid to accomplish the tasks that confront him as he travels around the country. Braid plays an increasingly large role each year, and while he believes that most anglers understand the characteristics that make braid desirable – strength, abrasion resistance and limpness – many are haphazard about the way that they incorporate it into their own fishing.

“Most fishermen know that it’s not just for flipping and frogging anymore,” he said. “But there are lots of options out there. The rule of thumb used to be to use the heaviest line you can get away with. The problem is that the heavier line is harder to fish. It doesn’t cast as far or as smooth, and just like monofilament or fluorocarbon, the lighter you go it just seems to manage a whole lot better.”

While he’s tried other brands over the years, today he uses Seaguar Kanzen braid exclusively. Here’s how he applies the different strengths:

Eighty Pound: “No matter what brand you use, this stuff is like rope. The only way it’ll break is if you have a nick in your line or it rubs on something that cuts it, or maybe when you slam the hookset and have too much slack in your line. I’d rather not use 80-pound if I don’t have to, but I go to it when I’m fishing in a place where there are big fish and extremely heavy cover – like Florida or the California Delta, and usually if the lightest weight I’m using is an ounce and a half. It’s also good for hanging pictures at your house.”

Sixty-Five Pound: “This is the gold standard, my default size for most heavy tackle applications. It’s my go-to when I’m punching or frogging in heavy cover.”

Fifty and Forty Pound: “I’ll use these for the same applications as 65, but when I’m fishing the frog in somewhat more open water or flipping when the vegetation is not as thick. I also like it for bed fishing. But on extremely big fish – anything over six pounds – a lot of times I don’t like braid when I’m bed fishing. There’s something about it that they don’t like. But anything six pounds or less I’ll use it. It reacts quicker and it makes them easier to swing into the boat. It’s also good for my Kicker Fish X-Plodin Toad, or with a Skinny Dipper, as well as for burning a spinnerbait or ripping a lipless crankbait out of the grass, anything that’s a reaction-style bait where you don’t have that close, jarring hookset. Most of the time I prefer 40 over 50, because if you’re going to use 50, you might as well use 65.” 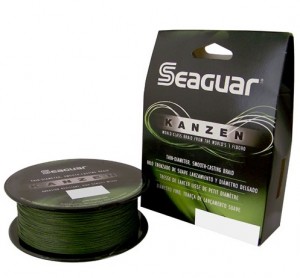 Thirty Pound: “I use 30 for big topwaters, like Spooks or a Lucky Craft Gunfish or a Devil’s Horse. All of those baits tend to catch bigger than average fish.”

Twenty Pound: “This is as low as I’ll go on baitcasting tackle. I like it with a Pop-R or a G-Splash because it responds better than mono. It doesn’t take much effort to make the bait walk or spit. I’ll usually throw it on a Dobyns 705 glass rod so I don’t rip it out of his mouth. It’s also good for crankbaits, when you’re trying to get them a little bit deeper or pull them out of grass, especially when there are big fish around. Twenty is as high as I’ll get on a spinning rod. Usually if I’m skipping docks with a Senko or a jig I’ll use 15- or 20-pound braid and pair it with a 15- or 20-pound fluorocarbon leader.”

Eight, Ten and Twelve Pound: “I’ll only use these on spinning tackle and I’ll typically use the lightest I can get away with. I always use a fluorocarbon leader, and to tell you the truth I’ve never even had 8-pound braid break. The knot always breaks before the braid. This is my setup for dropshots and shakey heads and tiny swimbaits. I also use it for brim fishing and crappie fishing. It’ll save you a lot of money because once you put it on at the beginning of the year you usually don’t have to respool.”

As noted above, Reehm’s various uses of braided line often rely on a fluorocarbon leader. He favors Seaguar’s “Blue Label” leader material. “It comes in every size you could ever want,” he said. “It’s a little stiffer than what you’d get on a regular spool, but it’s the industry standard.” He uses a double-uni knot to affix it to his main line, which he believes is most reliable, small enough to get through rod guides and “pretty easy to tie.”

While the braid-to-leader system is desirable on the lighter end of the spectrum, he rarely employs it at the heavier end: “I don’t like using a fluorocarbon leader on heavy gear,” he said. “It’s one more knot that could break. When the knot goes through the guides, it hurts the fluid movement of your pitch, and when the knot hits a piece of vegetation, there’s that momentary hesitation that feels just like getting a bite. I’ll use straight braid whenever I can.”

He also noted that while braid is critical to slice through thick vegetation, especially on long casts, there is a downside to that cutting ability. When flipping around wood, the line can slice into the cover and pin your bait in place. Similarly, when the line itself hits the wood, it stops the momentum of the cast. Accordingly, around wood cover he’ll try to use fluorocarbon whenever possible.

The Kanzen he relies upon is colored green, and he said that anglers who worry about its visibility are over thinking the matter. “People have to get over that,” he said. “It looks just like a blade of grass, especially if there’s any stain at all. As the Alabama Rig has proven, they’ll still bite steel wires, so green line shouldn’t bother them.” In the past he’s used other colors, including red, with no appreciable drop-off in bites. “In fact, before the Kanzen came out, I’d use chartreuse braid with a leader. You could watch that chartreuse line sinking and it would act like a tippet, telling you when you had a bite.”

The braid he uses today starts off green, but eventually all braids fade. While you might be inclined to change them out, Reehm said that’s absolutely the worst thing you could do. “The color may change, but they get limper and easier to use – seasoned,” he said. If you’re worried about darkening the line again, a permanent marker provides an easy fix. 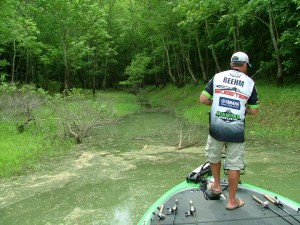 “With all terminal tackle, whether it’s hooks or line or anything else, it all boils down to hookups and landing percentages,” he advised.

Reehm’s uses for braid continue to grow. He said he knows anglers who use it to rip jerkbaits for smallmouths and others who use it to fish flukes and floating worms for schooling fish. Not only does the braid allow for a longer cast due to its lack of memory, but it also allows for solid hooksets at long distances.

Ultimately, the choice of how and where to apply braid is up to the individual angler, but once you make the decision to go that route, it’s still not a one-size-fits-all solution. Pick the proper strength for your application and see your livewells grow fuller.