Square billed crankbaits have become the darling of the pro tours, and the tackle industry the past two years. It’s for good reason too, because squarebills have won regular season Elite Series events, Bassmaster Classics, Postseason tournaments, FLW Tour events and pro-am, buddy and club tournaments across the country. 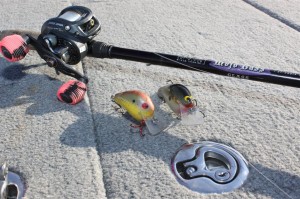 Over the last 18 to 24 months manufacturers everywhere have produced their own versions of a squarebill. Molded from plastic, with flat sides, round sides, tight wiggle, wide wobble, rattles, one knockers and silent models, squarebills have dominated the media and tackle orders.

Several anglers have done well in competition with one of those versions, but one angler in particular has stepped outside of the normal squarebill approach and has made his place among the squarebill community by doing things a little bit differently.

Kevin Short, from Mayflower, Ark. has earned two Elite Series victories; in 2009 on the Mississippi River in Iowa, and 2010 on Pickwick Lake in Alabama, and last month he added a Bassmaster Central Open win on Table Rock Lake to his résumé – all three came on squarebills.

While the injection molded models produced by most manufacturers are the rage across the country, Short has relied heavily on hand constructed wooden baits made by Ed Chambers, the founder of ZOOM Bait Company. 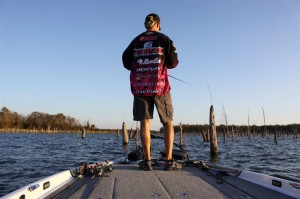 “I search through dozens of baits to find the ones that have the right characteristics,” said Short. “Then I fish them, and when I find one that has just that right action and gets the most response from the fish; I mark those for game day.” The others are saved for practice and fun fishing.

The Perfect Bait
Whether he is throwing the WEC E1 – the bait he used to win his three events – or the E3, a larger, wider wobbling, deeper diving bait, Short seeks for certain things when picking his lures. “Over the years I have found that there is a slight difference in some of the measurements of these handmade lures,” he said. “I look through them to find the ones that have the measurements I like, because they seem to have the type of action that I like.”

The right measurements create a lure that has not only the right wiggle, but they also have the geometry to create the right hunting action on the retrieve. Hunting describes the kind of movements that find the lure wandering side to side throughout the retrieve. “A crankbait that hunts generates more strikes because it more closely mimics the swimming action of a real forage fish,” Short opined.

However, the fact that his baits of choice have excellent action doesn’t mean that Short merely winds them in.

Deflection is Key
Short likes to throw his wooden squarebills in the summer through the fall. In the summer he is looking for the last of the remaining postspawn fish, and those that survive in shallow water by feeding on bluegill. In the fall, when bass are heavily gorging on shad in creeks, he turns to them again.

He looks of for creeks that have wood cover, because the key to the success of these lures is to bounce them through cover. “I throw them over, around under and through stumps, standing timber, laydowns and everything else,” he said. “The bait deflects well, and the action of the lure ricocheting off of wood triggers strikes from bass. 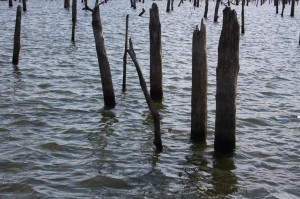 Timber Gear
because he is tossing these lures around heavy cover, Short increases his line size, and matches his equipment to the cover he is facing. “I need a rod that can handle the shock, a reel that is strong and smooth, and line that can handle some abuse,” he said. “I’ve got the perfect setup for doing it all.”

He prefers fiberglass rods because they allow the fish to take the bait in deeper when they reactively strike to a crankbait banging through their lair. He uses a St. Croix Mojo Bass 7’4” medium action rod, and pairs it with Lew’s Speed Spool Tournament Pro reel with a 6.4:1 gear ratio. He tops it all off with 14 to 17-pound-test Vicious Pro Elite Fluorocarbon depending on the severity of the cover.

That heavy line may seem like overkill, but when he does it right, the bolstered strength is necessary.

Which Tree
For Short, the more complex the cover, the better it is. “Remember when I said I through it over, around, under and through? I meant it,” he said. “I look for the trees that have the major groupings of branches, or have the most complex trunk systems; those are the ones I target first.”

He also searches for the creek channel that migrates through the pockets he is fishing. He believes that if he targets trees with several trunks, or a cluster of them together – near the creek channel – he will catch the right bass.

But, don’t think that he makes a couple of casts to the sides of the cluster. He literally circles the wagons around the whole cluster making multiple pinpoint cast past the tree and retrieves the lure through each and every nook and cranny before leaving it. If he still feels like it could be the right tree, he will visit it again. 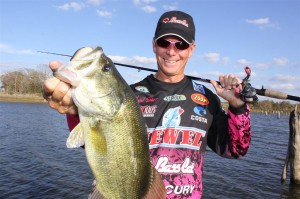 “To make this technique work, you have to blanket the cover with casts, and you have to be precise and deliberate with your retrieves,” he said. “If you are careless, you’ll hang up the baits and not get very many strikes.

Final Tip
Some people question how he is able to work a bait with two treble hooks through dense, woody cover. The truth is, he lets his rod do the work. If you get accustomed to your equipment and the feel of the lure, you will be able to tell when you are about to contact a limb,” he said. “You will feel your line against the limb, and when you do, if you use your rod tip to walk the bait through cover instead of grinding it with the reel, you’ll do a lot better; and get more bites too.”