Clark Reehm in the Backwaters

It’s every tournament angler’s dream: An unknown backwater with a resident school of fish, uneducated about fishing lures and not the least bit wary of fishing pressure.

Unfortunately, for most anglers, that’s a once-in-a-lifetime proposition….at best. 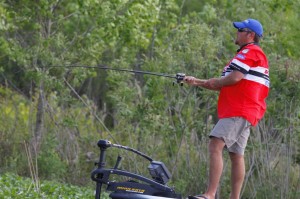 Still, that doesn’t stop us from chasing that hidden pot of angling gold, and even if we never find an absolutely virgin spot, that doesn’t mean that we shouldn’t spend time looking for such hidden gems.

That’s the approach that Elite Series pro Clark Reehm takes, particularly when it comes to Open tournaments. At the Elites, he typically only has two and a half days to practice, so taking a substantial amount of time out in search of something off the beaten path can be a costly gamble. But when he has a longer period of time to search out these areas, it’s a calculated gamble that he’s willing to make.

For example, this year on the Arkansas River at Muskogee he and a co-angler friend spent almost all day on the Wednesday prior to the tournament with a full range of garden tools, trying to get into a backwater pond.

“I knew the fish were there are locked in, so it wasn’t a gamble,” he recalled. “But when you’re dealing with hearsay that’s a whole other ballgame.”

The rise of internet satellite mapping imagery has made the hunt easier, of course, but Reehm said that his best tips often come from the hearsay that occasionally lets him down. “A lot of it is word of mouth. You hear an old-timer talk about some place he remembers. Unfortunately, there are a lot more people trying it these days.”

The closest Reehm has come to exploiting his search for untapped populations came in a March 2007 BASS Central Open on Lake Texoma, where he was in 2nd place heading into the final day and ultimately ended up in 8th. 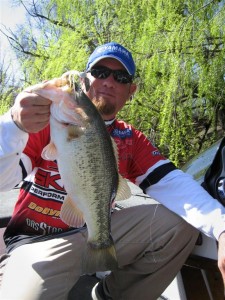 “You had to go across a shallow flat to access it,” he said. “But once you were inside it dropped off into 6 feet of water. They were resident fish, not coming or going.”

Unfortunately for him, Oklahoma pro Jason Christie had also found the hidden gem. They worked together to manage the fish that were there. With no more entering the system as fish were carted off to weigh-ins, they knew that theirs was a dwindling resource, so they made a gentlemen’s agreement to leave once they had sacked limits. Unlike a TVA lake with schools of fish or a tidal fishery where new bass move into key spots when others vacate, they had a finite number of fish they could catch. Ultimately, had either angler had it to himself he might have won (Christie finished 17th) but the combined pressure was too much.

Even if an angler finds himself alone in an area, he should be sure not to take more than he needs to keep progressing to the next level. On the last day, you can hammer them, but until then it pays to be slightly conservative.

Another concern is changing water levels. Run-off from a storm can muddy a backwater and make it completely unproductive. Conversely, falling water can prevent an angler from getting into an area that produced the day before. Even worse, you may get in, but not get out at the end of the day. If you have the winning fish in the livewell, that can be a bitter pill to swallow. It pays to have reference points and to constantly monitor them, even when no conditions seem to have changed.

“You hear all kinds of stories about guys jumping their way into an area, across a sandbar or a flat, but the tendency is to get stuck. On both of the major circuits there is a rule that you can get out of the boat to get out of an area, but not to get into an area. It’s not so easy to move a two-thousand pound boat across muck or sand.”

Reehm estimated that perhaps a quarter of the tour-level pros carry some sort of cutting implement with them in their travels, if not in the boat at all times, then at least in their trucks. Years ago David Dudley won a major tournament with the help of a chainsaw; Reehm’s implements are a bit more low tech – he typically carries a pair of long-handled clippers and a hand saw. He also never leaves home without a push pole and noted that some anglers take it a step further, bringing a block and tackle apparatus or a come-along with them to get out of hairy situations. 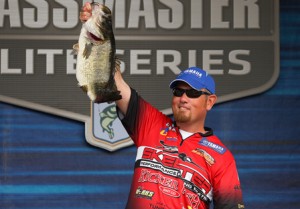 Surprisingly, he doesn’t always run his boat with a light load when he anticipates a skinny water trip into a backwater. With an outboard, a tank of gas, water in the livewells and four 70 pound AGM batteries, the boat will naturally be aft-heavy. Reehm said that rather than take out items, he’s better off distributing the load up front so that the boat sits flat and doesn’t dig into the bottom.

Ultimately, the quest for a hidden and unmolested backwater is typically a fruitless one. For every success, there are countless failures, trips into the mud and clogged up intakes. But when it works out, it’s the bass fisherman’s Holy Grail, and that’s what keeps pros like Reehm hunting for them.