Mudlines Can Be The Difference in Summer

The Edges of Mudlines Can be Excellent Places to Catch Bass

To an angler who likes to cover water with power baits, clear water can be downright terrifying.  The thought of trying to figure out how to force feed power fishing tactics in an environment that is so specific to finesse applications is almost enough to make an angler quit fishing.

With the thoughts of a West Coast friend of ours, who is a power fisherman that lives on the clear waters of Northern California in mind.  The two components of clear water and power fishing do not have to be exclusive.  In fact, they can be quite compatible; given the right circumstances.

A little over a week ago, we introduced you to an tournament angler from California who is a transplant from Arkansas.  Chad Martin; a Western pro who has fished the Bassmaster Opens as well as the FLW Everstart events, is a self avowed power fisherman.  A look in his boat will provide the observer a glimpse of crankbaits, spinnerbaits, swimbaits and jigs; depending on the season of course.

His power fishing season lasts a lot longer than some might think.  When others begin to put down the power lures in favor of finesse gear,  Martin favors keeping an eye out for conditions that help him continue his pursuit.

“I really look for mudlines on the clear lakes around home,” said Martin.  “They are a great way to find active fish from late spring through the fall, and they allow me to use faster moving lures most of the time.” 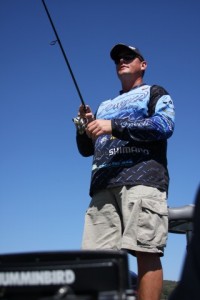 What Makes a Mudline?

While most people would consider the wind and current to be the primary means of creating a mudline, it can also be a man made phenomenon that does it.  In the summertime, pleasure boat traffic and water skiers can be responsible for the mudline even when there is very little wind stirring up the water.

A mudline is different from the cold, muddy water that rushes in during late winter and early spring storms.  This is a light, silty type of a blanket that stains the surface layers of the water, giving bass something to use as an edge to hide themselves in and dart out of or below to feed on passing baitfish.  A mudline is similar to the shade of a bridge or dock that extends out into the water.  Bass will often use that shady edge as cover, just as they will a mudline.  Under the right conditions, a mudline can extend hundreds of feet off backside of the tip of a point as the current from wind and wave action pushes it further away from the bank.

What to Look For
Martin said that he likes to look for mudlines that give him the ability to target fish in a specific manner.  “I’ve seen mudlines on flat points that are huge, and while I’ve caught fish from them, they can be kind of like a needle in a haystack,” he said.  “I prefer mudlines that are coming off of a steeper point that helps me better identify where the fish might have been holding before the mud, and it helps me fish them faster.”

His preference is to seek out main lake points this time of the year with some sort of transition, as well as one the leads into a main creek where large populations of fish will be heading in and out of.  “I really look for areas that clay or mud turns to gravel, or when smaller rock turns to larger rock,” he said.  “Fish can use those edges and move up and down under the mudline to ambush baitfish feeding on the plankton being stirred up within the mud.”

Once he gets on the pattern, he will quickly run as many points as he can looking for active fish that will chase a lure.

Mudline Tactics.
Among Martin’s favorite lures for mudlines are spinnerbaits, crankbaits and jerkbaits.   He uses these lures to target fish that are hiding primarily inside the mudline, darting out underneath to ambush prey.

“I really like to use a white spinnerbait with white painted blades under a mudline,” he said.  “I tie a pearl white Talon Lures 1/2-ounce Shibui spinnerbait on and retrieve it quickly just under the mudline; I can catch fish anywhere during the retrieve, and all the out to the end of the mud.”  He throws his spinnerbaits on a Powell Max Series 734C casting rod matched with a 6.5:1 Shimano Chronarch 200E6 reel spooled with 15-pound-test fluorocarbon line.

He likes medium diving crankbaits like River2Sea’s Hi Dep 65 for his mudline approach.  He said that having a crankbait rattle through the mudline then pop out underneath can often trigger strikes as well.  He uses a Powell Endurance 725CB cranking rod, a 5.5:1 Shimano Chronarch 200E5 and 10 to 15-pound test fluorocarbon line with his crankbaits.  “This is a great lure for stopping and going just under the mudline,” he said.  “I reel it down and pause, allowing the lure to float up into the mudline; reel it down again, and repeat a couple of times before retrieving all the way to the boat.”

He uses jerkbaits, both hard and soft, to quickly and erratically retrieve just under the mudline as well. 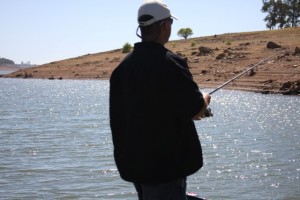 “I try to target mudlines especially when fishing for largemouth and spotted bass,” he said.  “I’ve not had great success on smallmouth here around home, but then again, we don’t have a large population of them in too many of our lakes because of the spotted bass.”

Final Thoughts
Martin suggested that anglers not spend too much time on any one mudline until they start getting bites.  “Keep moving and switching up lures,” he said.  “You may run a few before you get bites, and then you can slow down and try to work it a little more thoroughly.  I won my first tournament in the West about a year after I moved here by running mudlines on Folsom Lake and my non boater for the day couldn’t believe it.”

He also said not to forget the good looking ones if you don’t get any bites initially.  “I tend to cycle back through them at least once in a day to see if the fish have gotten in there and started feeding yet; they usually will get in them at some point.”