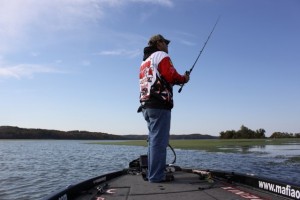 From the moment he hit the scene, Strike King Pro Staffer Greg Hackney has been dubbed “The Hack Attack.” His nickname comes from his all out assault on the pro tours. From his first win on Lake Ouachita in 2002, to his grabbing of the Bassmaster Tour Rookie of the Year Title in 2004, he has set the fishing world on its ear.

“The Hack Attack” struck hard and often, as he became one of the fastest Anglers to reach the Bassmaster $1 million earnings mark. To date his BASS earnings totals $1,397,056, and he did it in 119 BASS Entries, cashing checks in 94 of those events; tallying three wins and 10 trips to the Bassmaster Classic along the way.

His FLW record is equally impressive; in 92 entries, Hackney has earned $1,039,957. His FLW statistics includes a win in the 2009 Forrest L. Wood Cup and three other victories.

Hackney’s penchant for targeting shallow cover with a Flippin’ rod, his all out coverage of the cover, and the monstrous hookset with which he pummels the bass with are legendary. His equipment is geared to handle the brute force with which he operates, and Strike King recognized his need for a jig that could stand up to the brutality of “The Hack Attack.”

“I love Flippin, and I love Flippin’ a jig,” said the Gonzales, La. pro. “I grew up fishing shallow, and most of the time I was flipping a jig, but I needed one that acted a little bit more like a plastic bait, so Strike King and I came up with The Hack Attack Jig.”

What he realized in the process of designing the perfect jig for penetrating shallow cover, was that he needed a jig that would fall straight; something he said he was unable to find before. “Most jigs are unbalanced in their constructions,” said Hackney. “Too much of the weight is to the rear of the jig, and it creates a gliding action when it falls. I needed one to hit the water and fall straight down, the way a Texas rigged plastic bait does.”

While it would have been easier to pick up a plastic lure, like a Strike King Rodent, and rig it on 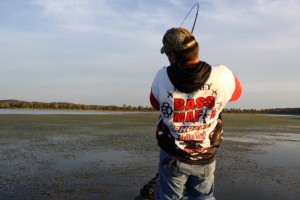 a Tour Grade Ttungsten sinker with a big hook, Hackney believes the hookup ratio on that type of rig is less efficient than he’s comfortable with. “A jig gives me a bunch of confidence that if I get bit, I’m gonna catch that fish,” he said. “I don’t have that same confidence with a big weight and soft plastic lure; I’ve missed some fish on it.”

Armed with his desire to have the perfect Flippin’ jig, and the world class design team at Strike King, Hackney set out to produce his dream lure. The outcome would be a lure that is not for the faint of heart, one that would stand up to the rigors of heavy cover and big jaws of monster bass. “The Hack Attack is tweaked to perfection,” Hackney opined. “The weight is perfectly balanced to fall straight down; it has the perfect 34-strand weedguard and a 27-degree line tie on a heavy Gamakatsu saltwater hook.”

Armed to Attack
As described above, The Hack Attack jig requires specialized equipment. Hackney uses a 7’11” heavy action Quantum Tour Hackney Flippin’ Stick that he designed specifically for handling heavy cover with braided line. He matches his Flippin’ Stick with a Quantum Tour Edition PT Burner reel with a 7.0:1 retrieve speed, and spools it with 50-pound test braid.

“I want to make sure I get the fish out of the cover when they strike,” said Hackney. “So I gear myself up to handle big bites in heavy cover. When they bite, I set the hook like I’m mad at ‘em; my gear, and the Hack Attack jig are all built to handle it.”

Choosing a Weapon
Hackney said that he uses a 1/2 – ounce model most of the time, because it best suits the majority of the cover he’s faced with across the country. “The weights on the Hack Attack jig are true,” he said. “So, I can use the size I feel perfectly fits the conditions. In other jigs, what I thought was a 1/2 – ounce was really heavier than that. We weighed them in our testing and in production to be accurate, so now I can choose exactly the right weight for the job.”

While the 1/2 – ounce size is favored for most conditions, Hackney has very specific times when he chooses a different size. “I fish a heavier jig in clear water,” he said. “At Clear lake this year, I flipped the majority of my fish on a 3/4 – ounce. The heavier jig gives them less time to look at it, and I get a reaction strike out of them.”

He reported that he is always fishing slowly, but the overall speed is relative. “I pretty much cover the water at a crawl and let the jig and trailer size dictate the speed,” he said. “I flip the bait into the cover, let it fall to the bottom on a semi slack line, pump it a couple of times and repeat the process.” He said the only time he lets his bait soak in a spot for long is when he knows bass are bedding in specific locations. 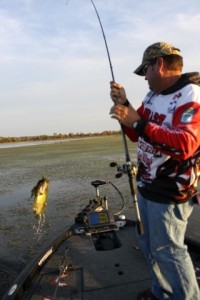 He’ll choose a heavier jig than that; up to an ounce and a quarter if the cover is heavy, and he needs the extra weight to penetrate the cover. The only time he opts for the 3/8 – ounce model is in extremely cold water. “The number one jig size sold in the country is a 3/8 – ounce, and it should be the 1/2 – ounce,” he said. “I only use that light of a jig in extreme cold or hot water conditions.”

Hackney’s choice of trailers for his namesake jig is simple, and they are dictated by the water temperature as well. “I use a chunk trailer in water cooler than 70-degrees, and change to a Strike King Rage Craw when the water is warmer,” he said. “The Rage Craw has too much action for flipping in cold water, but it is perfect for when the water is warm and fish are active.”

He shies away from using creature baits like the Rodent as a trailer because the profile doesn’t sit well with him. “There’s something about the way it fits on the jig that doesn’t look natural to me,” he said. “If I want a bigger profile, I upsize to the Rage Lobster, it has the right profile.”

Colors
Hackney designed the colors to work in pairs, and he makes his decision based on water color, clarity, cover and the forage the bass are feeding on. “I match the jig color to the water color,” he said. “In black water, I choose a black jig, in brown water I go with a brownish jig, and in green tinted water, I throw a greenish color.”

The reason he makes his decisions this way is because of how forage tends to blend into their surroundings. Everything from bluegill to crawfish camouflage themselves to match their surroundings,” he said. “If I choose a color that stands out, they’re not looking for it, and I’ll get fewer bites.” 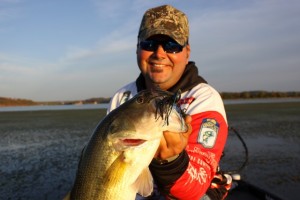 “I pretty much get to know what the fish are feeding on as a tournament week progresses, and I tailor my jig to match,” he said. “If they are feeding on bluegill or crawfish will make a difference in how I choose a color.”
If he finds his strikes are reducing on a black and blue jig, he may turn to Okeechobee Craw color, which has the blue in it, but a dark watermelon top instead of the black. If he is fishing a Bama Craw and the bites seem to slow down, he may turn to a Sexy Craw color; both have a hint of orange, but the Sexy Craw has more flash to it. He uses Gator Craw when he’s fishing grass in the summer time.

He was fishing the final tournament of the 2009 Bassmaster Elite Series at Lake Oneida with a Green Pumpkin Craw when he noticed the frequency of his bites dropping off. So, he turned to a Candy Craw color, and his number of bites increased. “The fish at Oneida were feeding on bluegill, and the two colors matched their shades perfectly.”

Hackney claimed that the trick to being successful with the Hack Attack jig was to know when to use it, and when to turn to Flipping soft plastics. “I only use plastics in the extreme conditions, too hot or too cold,” he said. “Other than that, I’m using a jig, if I could; I would use it 100-percent of the time. I like things up close and personal, and that is exactly what the Hack Attack jig was designed for.”