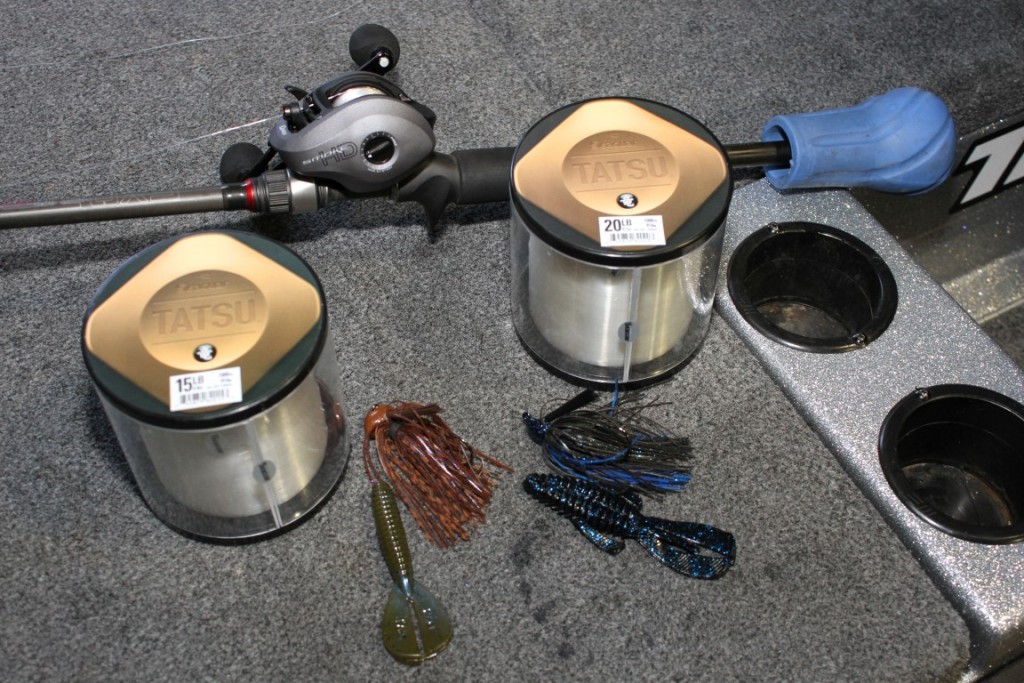 A jig is one of the best lures for producing quality lures is a jig, and professional anglers like Shaw Grigsby try to use them whenever possible. Here you see the supplies needed for rigging jigs for offshore use and for fishing shallow cover. Grigsby prefers a 7’6” heavy action rod and high speed reel like his Quantum setup shown. His best all-around jig for deep water is a 1/2-ounce Strike King Tour Grade Football Jig with a Rage Tail Menace Grub for a trailer. For shallow, heavy cover, he prefers the 1/2-ounce Hack Attack Jig and Rage Structure Bug as a trailer. A very important component of the setup is the line he chooses. He prefers the quality of Seaguar Tatsu Fluorocarbon line because of its superb handling, abrasion resistance and the increased feel it provides. Grigsby uses 15-pound-test Tatsu for his offshore jig fishing because the thinner diameter helps keep the lure on the bottom more effectively. For shallow water target fishing he increases to 20-pound-test Tatsu for the increased strength and abrasion resistance in heavy cover. 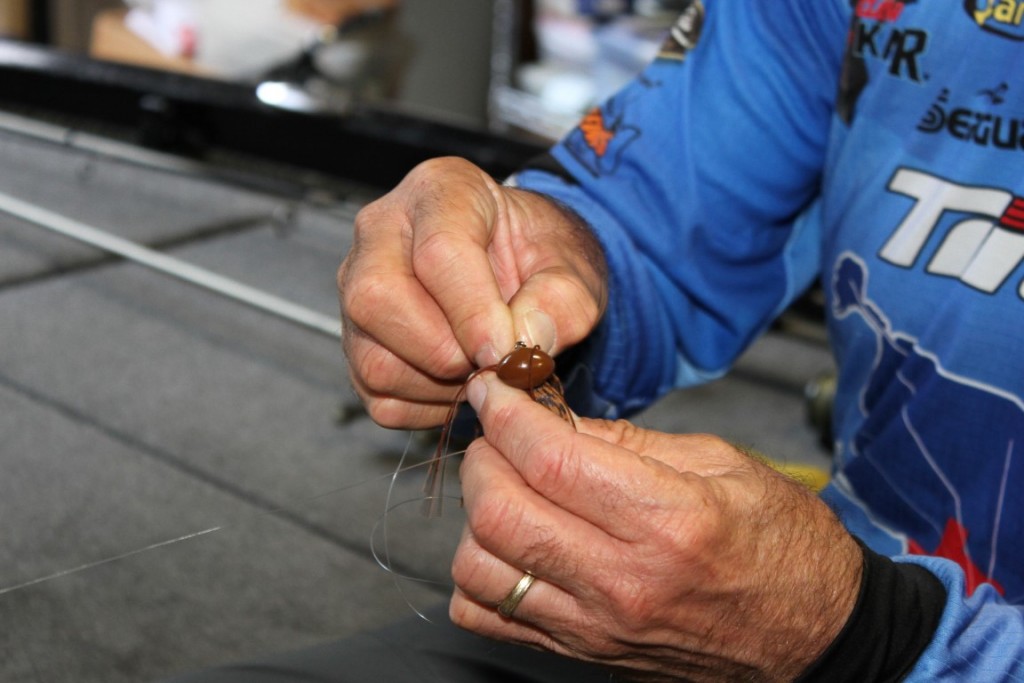 Grigsby ties his jig on his Seaguar Tatsu Fluorocarbon with a Double Pitzen Knot. To start with the Tour Grade Football Jig, run the tag end through the knot once, then back through creating a loop – much like tying a Palomar Knot. 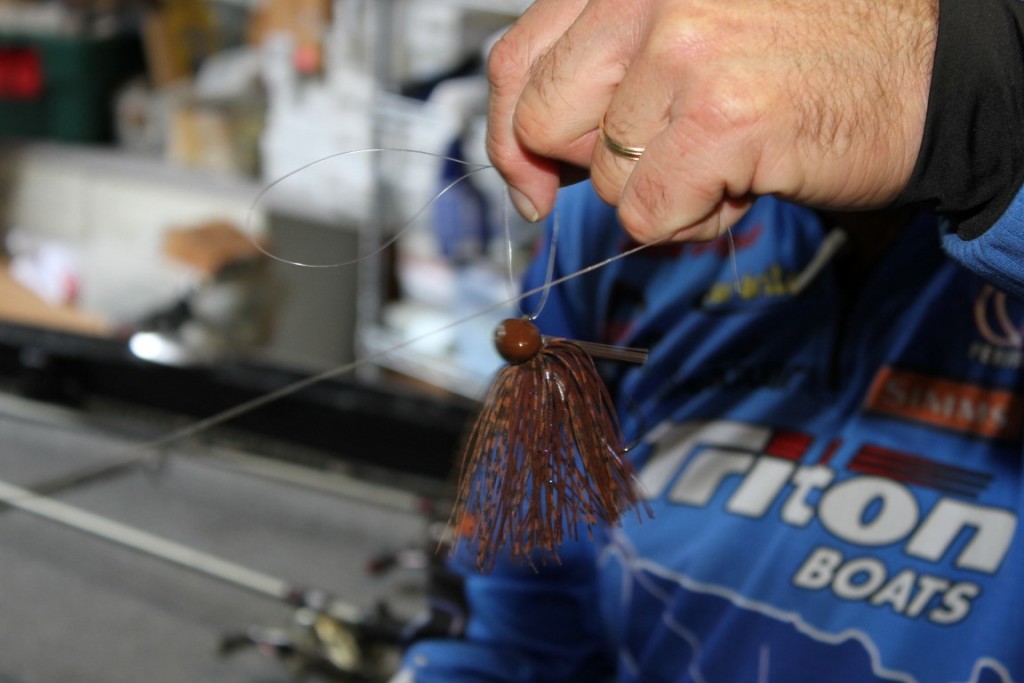 After making the loop, wrap the looped end of the Seaguar Tatsu Fluorocarbon around itself and pinch the main line and doubled loop between your thumb and fore finger on your left hand. 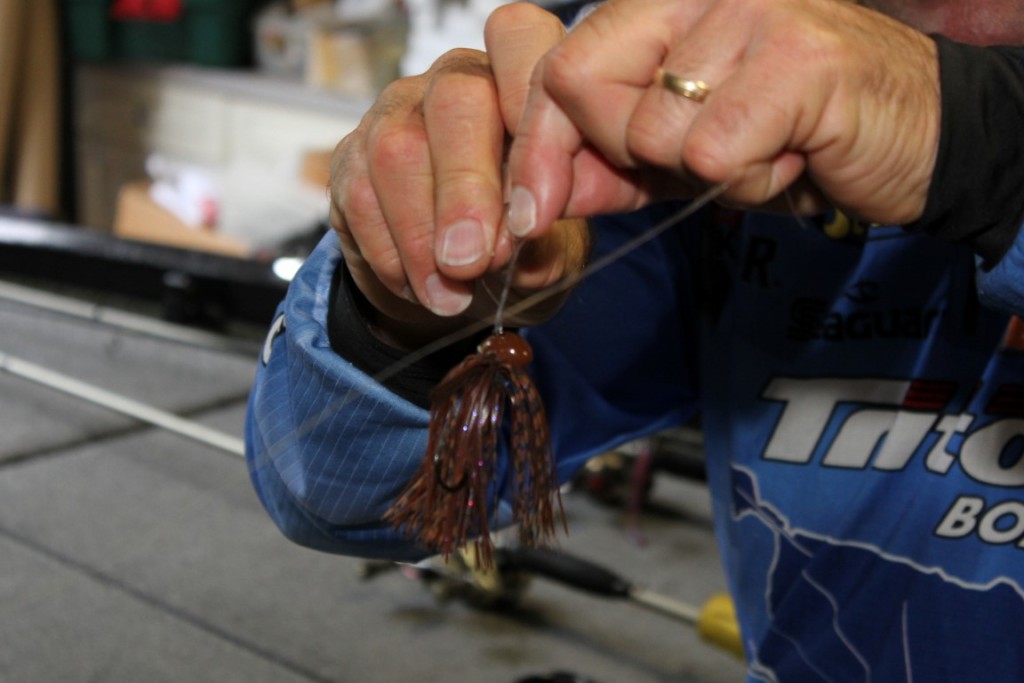 Holding onto that spot, grab the looped end of the Seaguar Tatsu Fluorocarbon and wrap the loop around the circle in the main line three times. 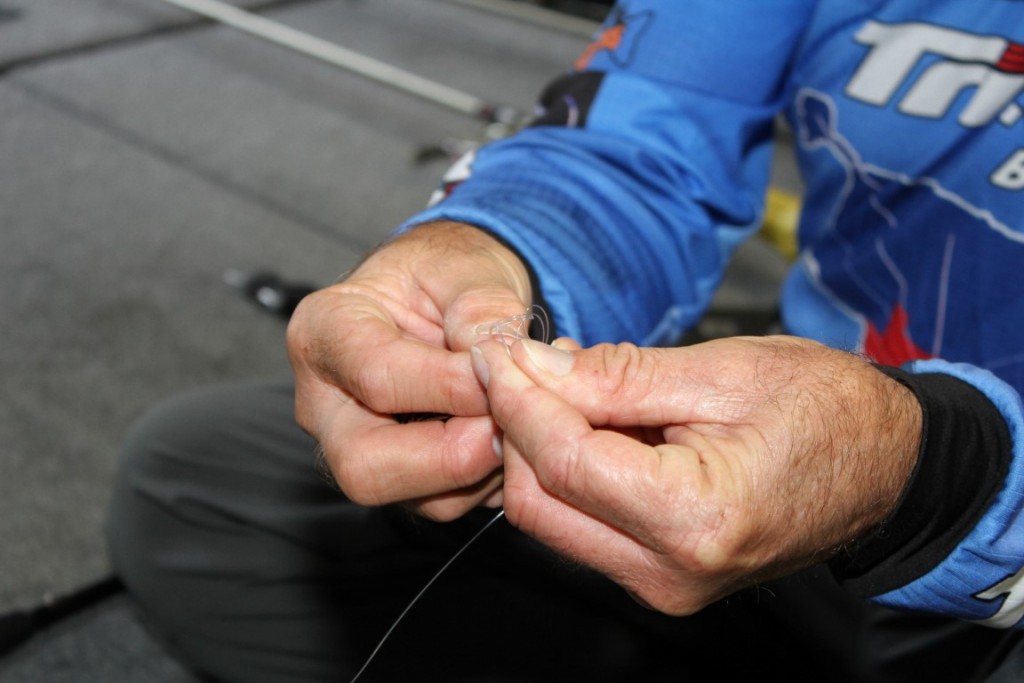 Now that you have completed the wraps, Insert the original loop back through the secondary loop created at the top of the knot assembly above the wraps and pull the original loop through. Wet the knot, snug it together on and pull the main line and single tag to cinch the knot at the eye of the jig. Grigsby has produced a video demonstrating how to tie the Double Pitzen Knot, and describes why it is the best knot for Seaguar Tatsu Fluorocarbon in this video here. 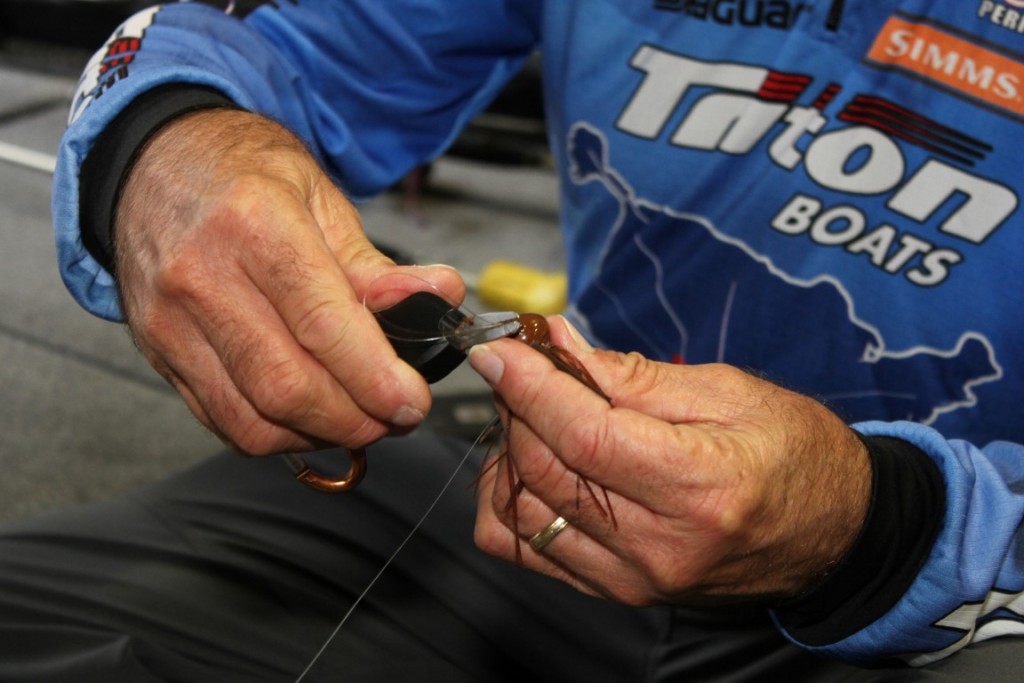 Trim the looped and single tag ends of your knot, leaving only the main line left. 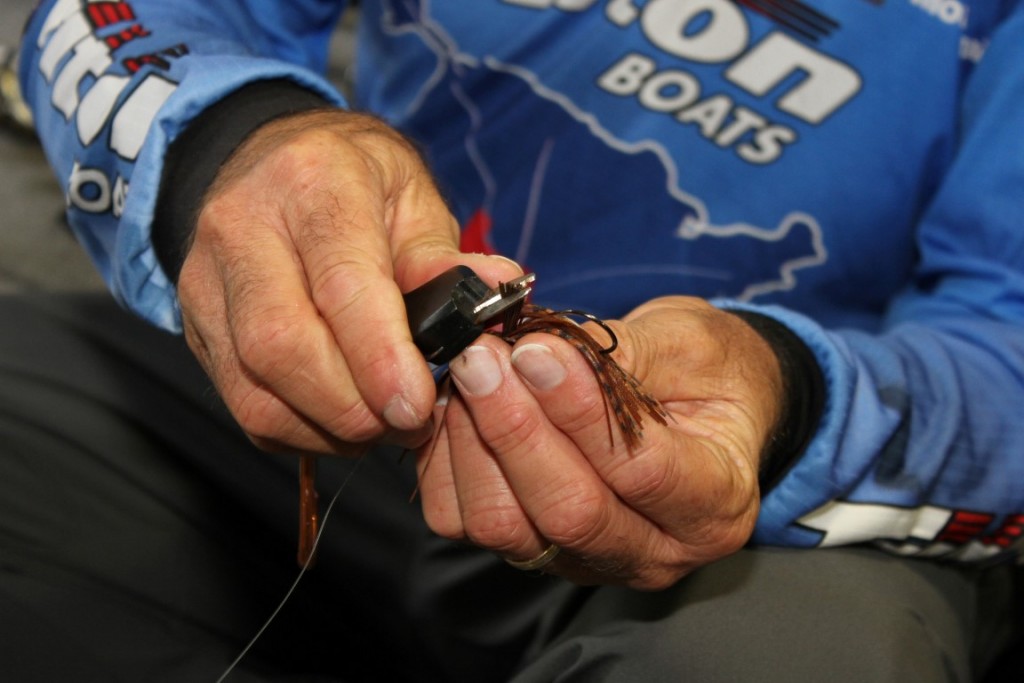 Next, you need to trim the weed guard on the jig to make it easier to penetrate the hook. With your scissors, trim the tip of the weedguard at a 45-degree angle at the end of the guard – like this. 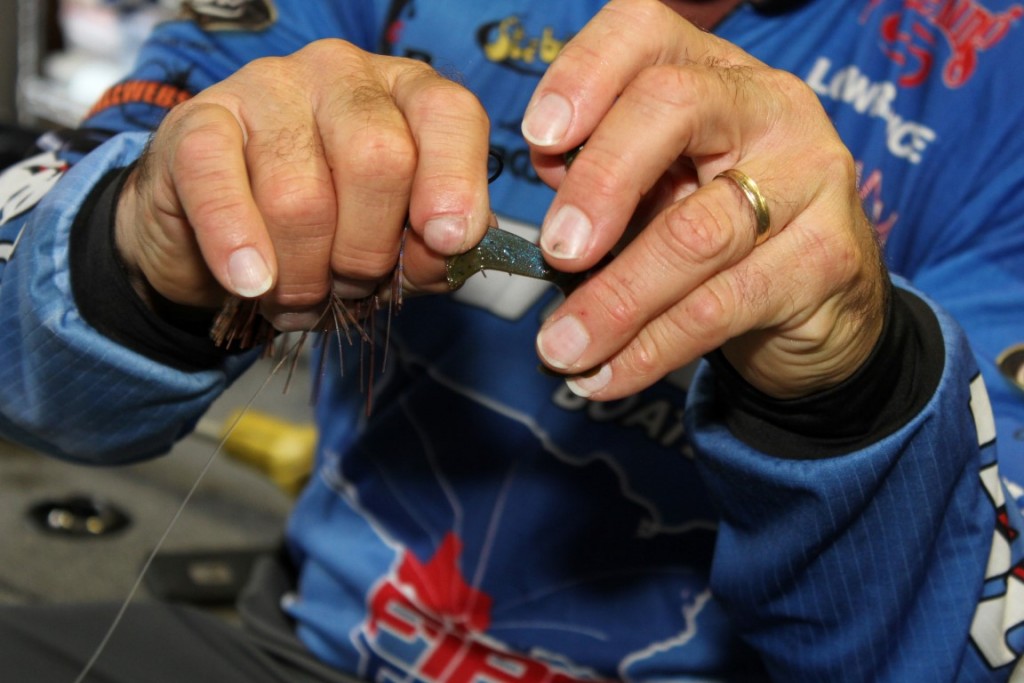 Split the Tails of your Rage Menace Grub. 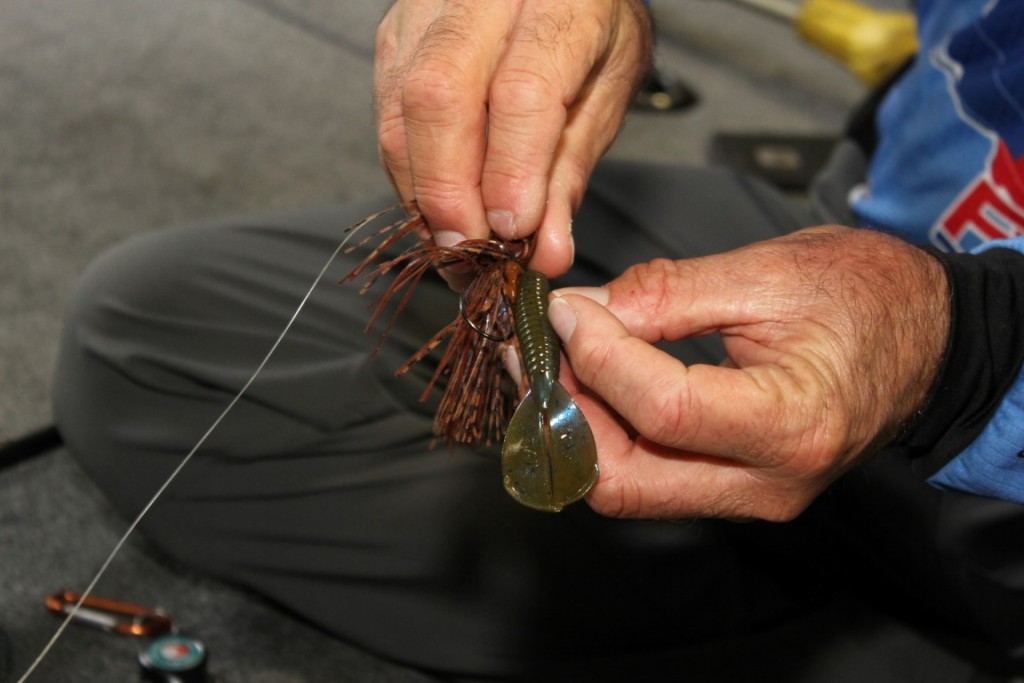 – Measure where your hook needs to come out by holding the grub up against the shank of the hook in order to visualize how the hook should come out of the trailer. It is important to do this so that your trailer will be straight on the hook. 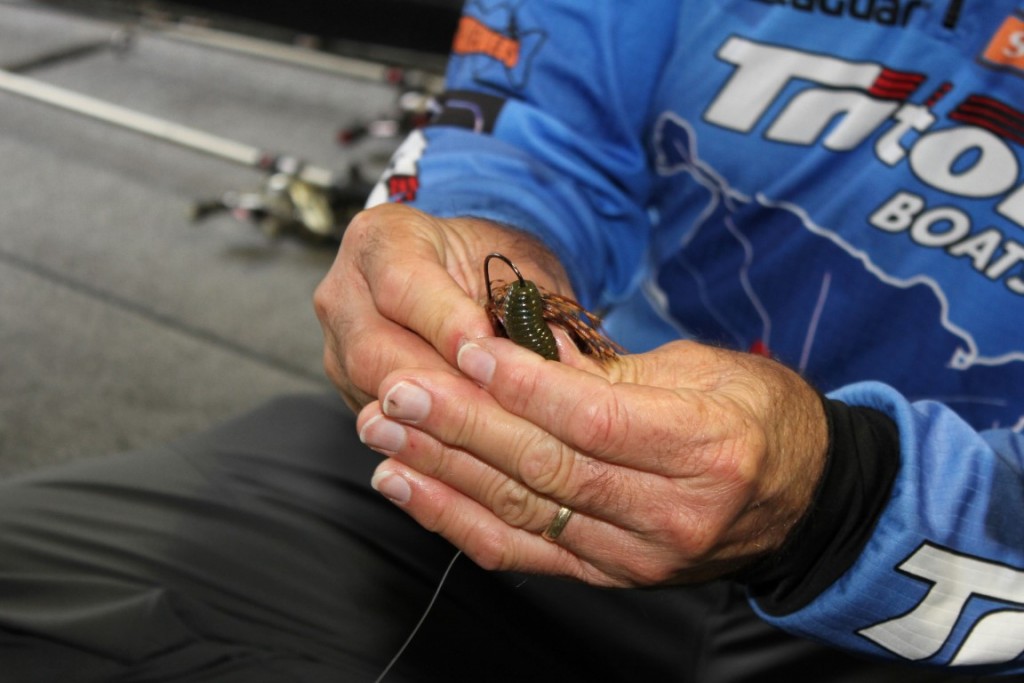 Insert the hook point directly in the center of the head of the trailer. 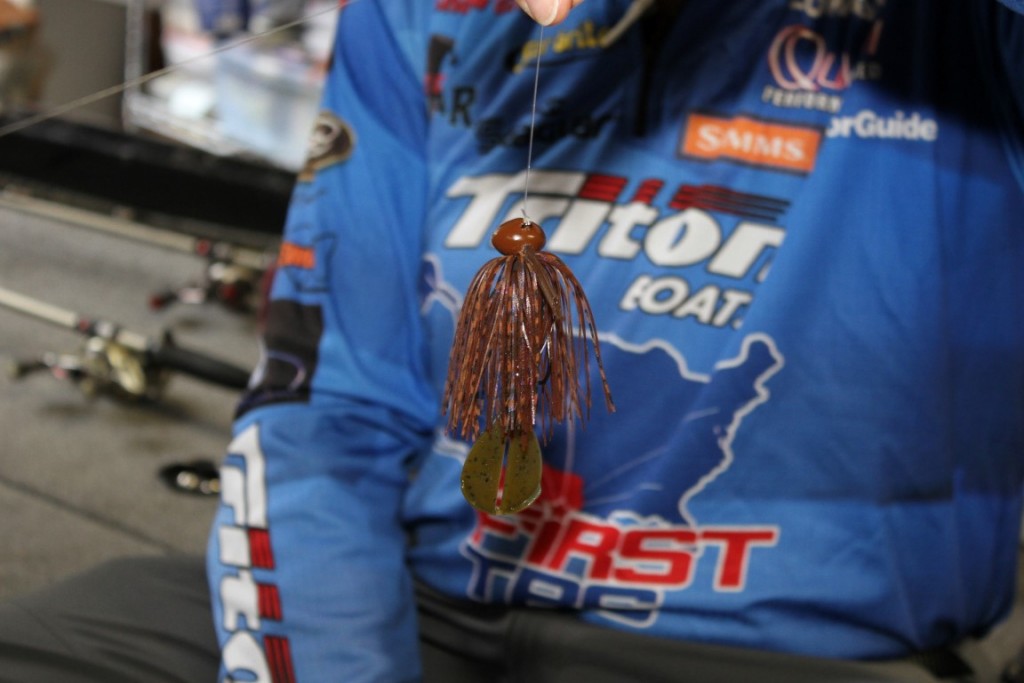 Push the body of the trailer up onto the hook making sure that the hook point comes out between the two tails and that the tail rest flat, in line with the head of the lure. Here Grigsby shows off a perfectly rigged football jig. 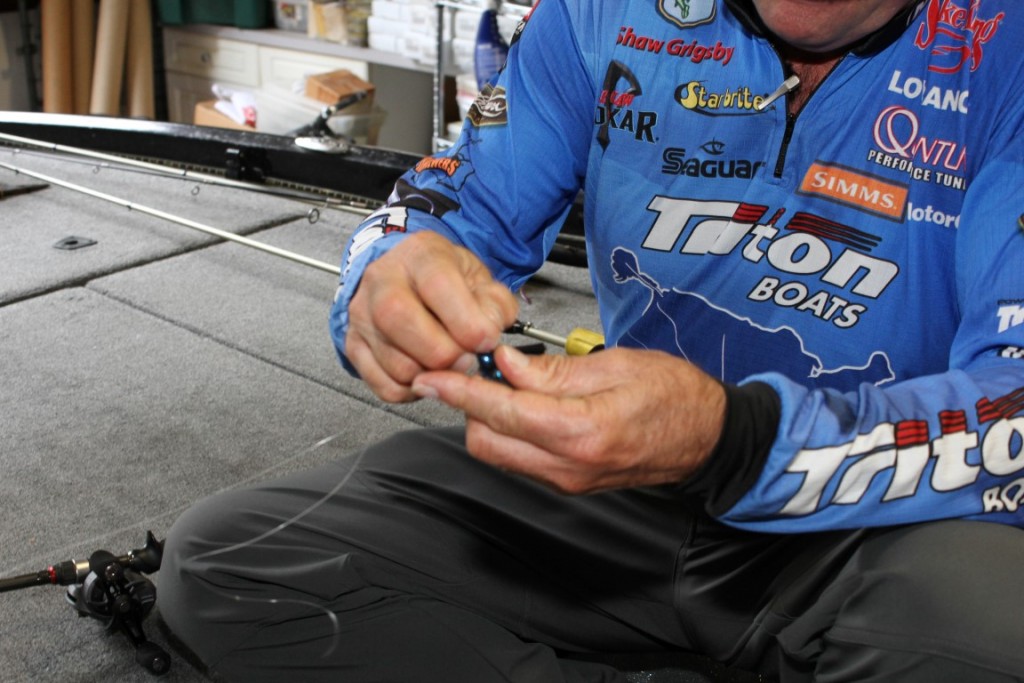 Now for the Hack Attack Jig. Using the 20-pound-test Seaguar Tatsu Fluorocarbon – or if you’d prefer, the new Flippin’ Fluorocarbon – double your line and push it through the eye of the hook. Once ready, tie your Double Pitzen Knot again. 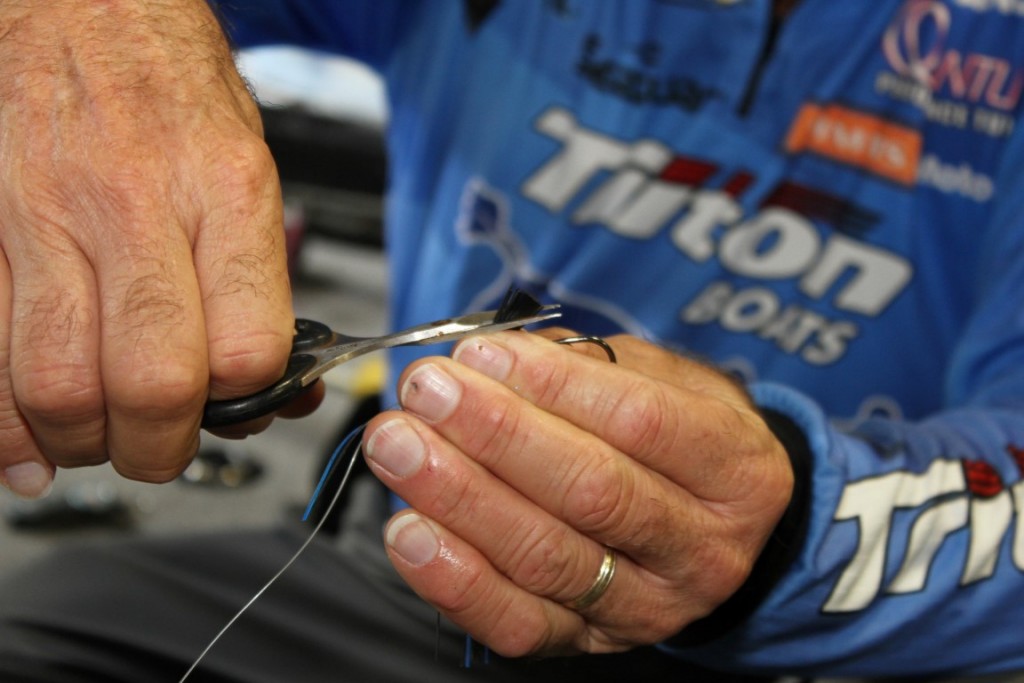 Once the knot is finished and the tag ends of the Seaguar Tatsu Fluorocarbon are trimmed, cut the weedguard at an angle again. 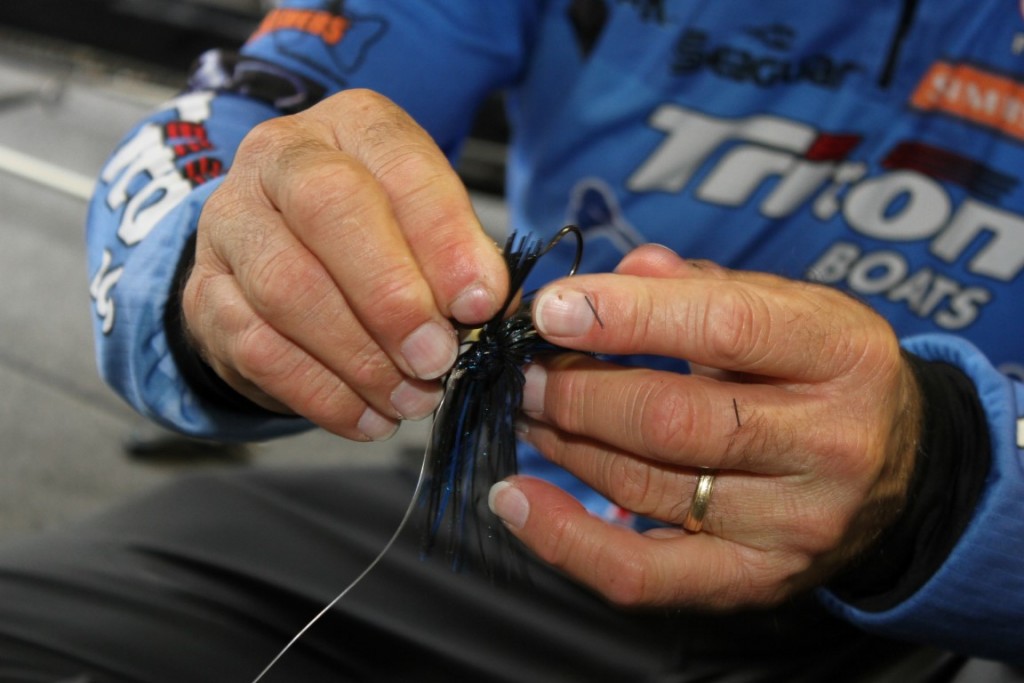 For the Flippin’ Jig, flare out the weedguard sideways across the head of the jig. 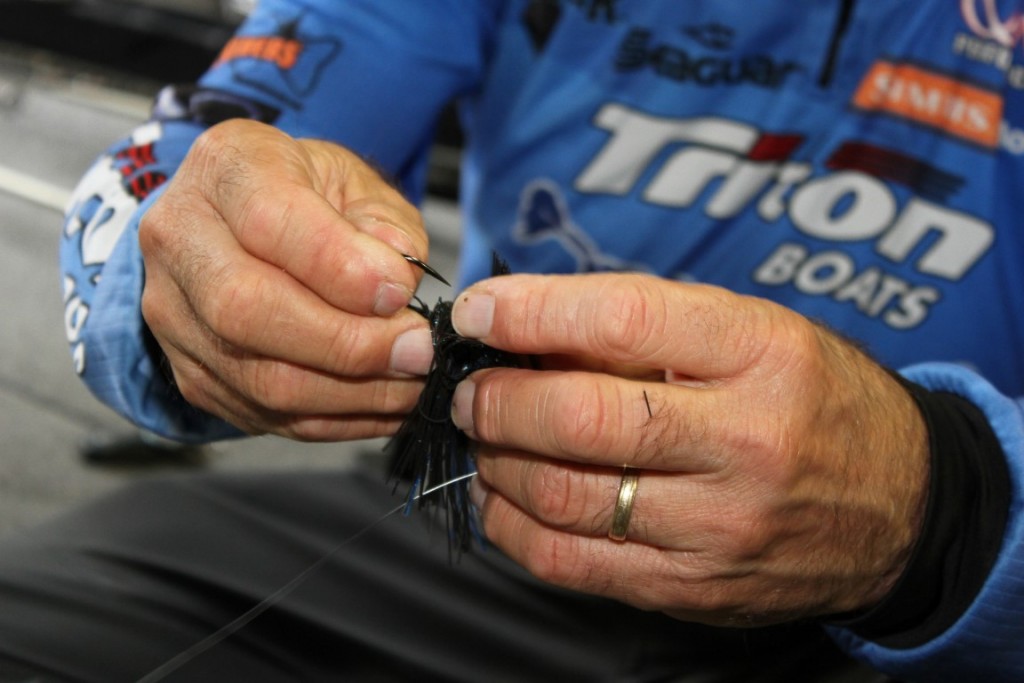 Then, using your opposite finger, place it in the middle of the strands of the weedguard and begin to push down towards the head. 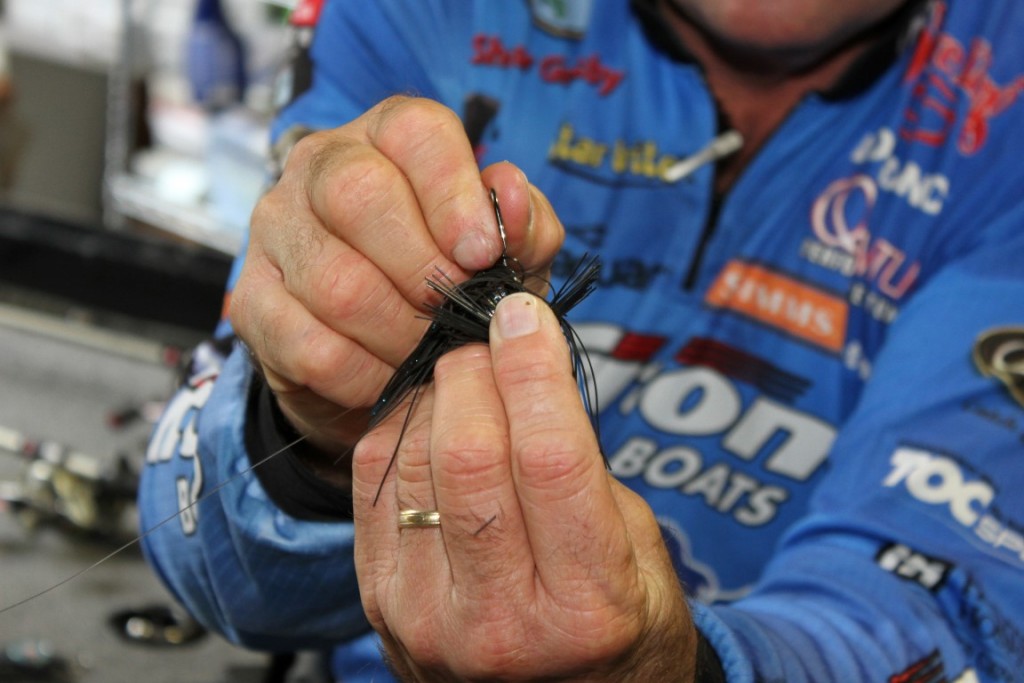 Push hard enough to create a double weedguard, or a “V” shape. 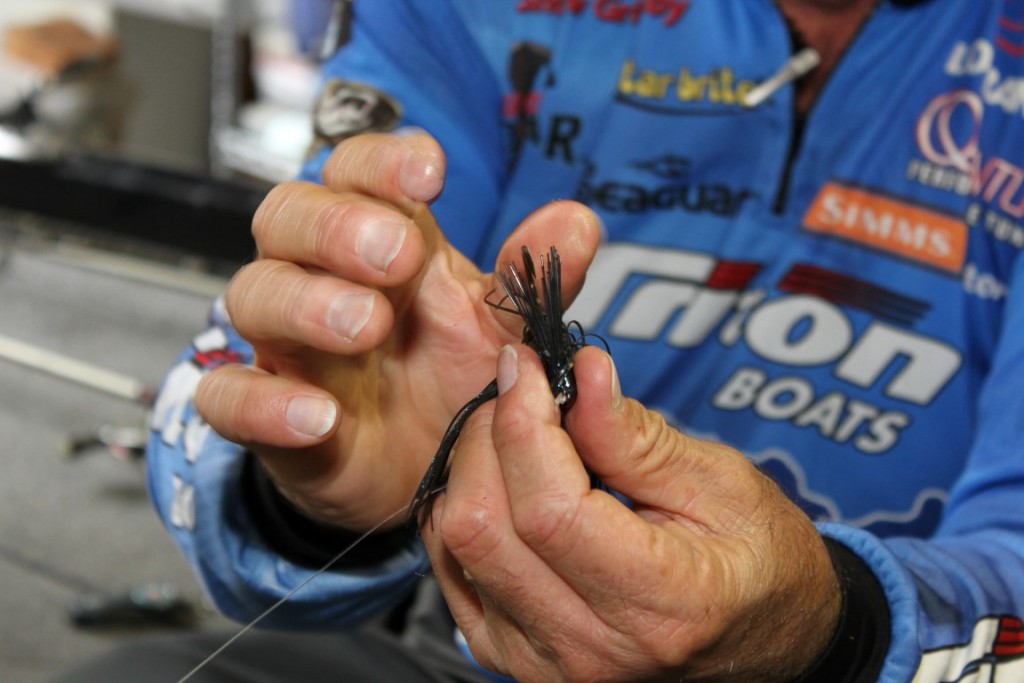 When you remove your finger, the weeduard will be spread wide and flat, and provide for optimal hooksetting. 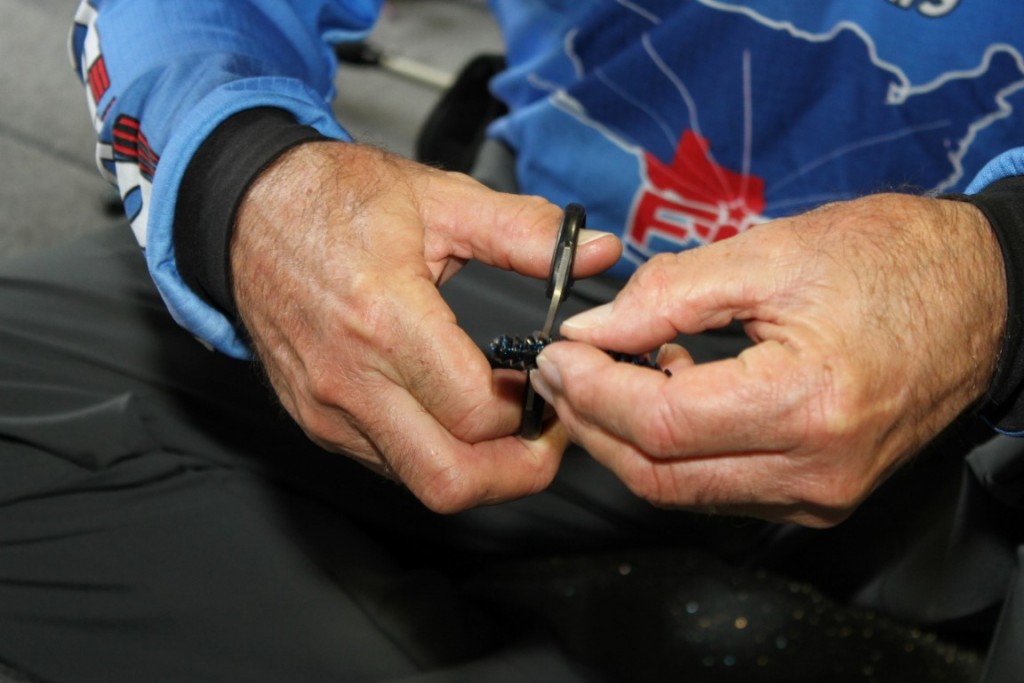 Pick up the Rage Structure Bug and your scissors, and cut the top of the lure off approximately a quarter of the way down the body. 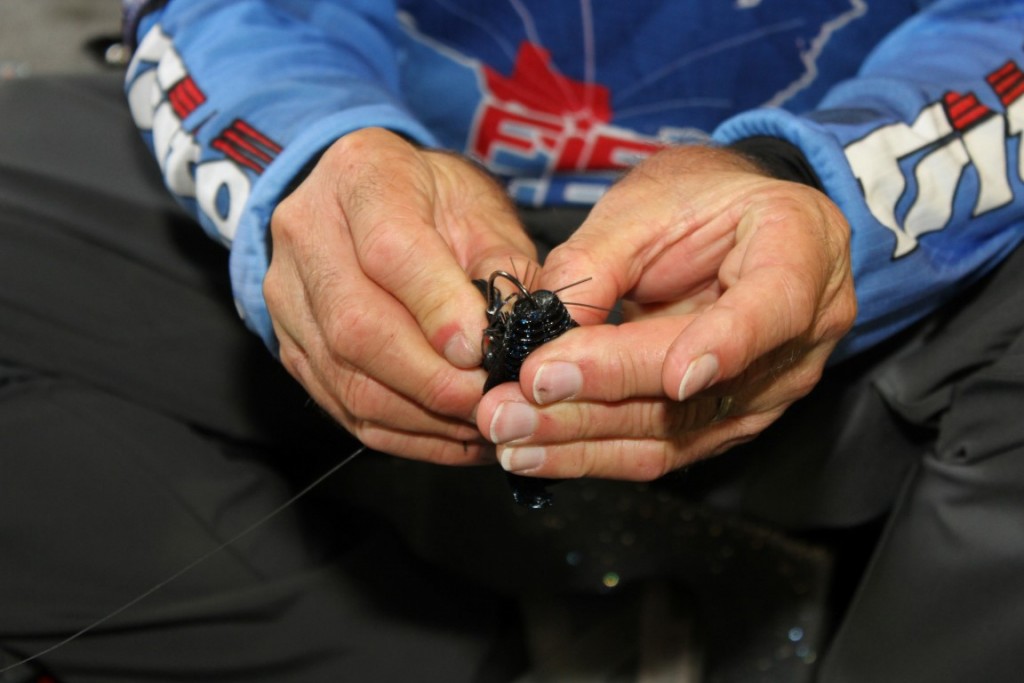 After trimming off the head of the bait, and eyeballing the distance the hook needs to be in the bait insert the hook into the center of the lure’s head. 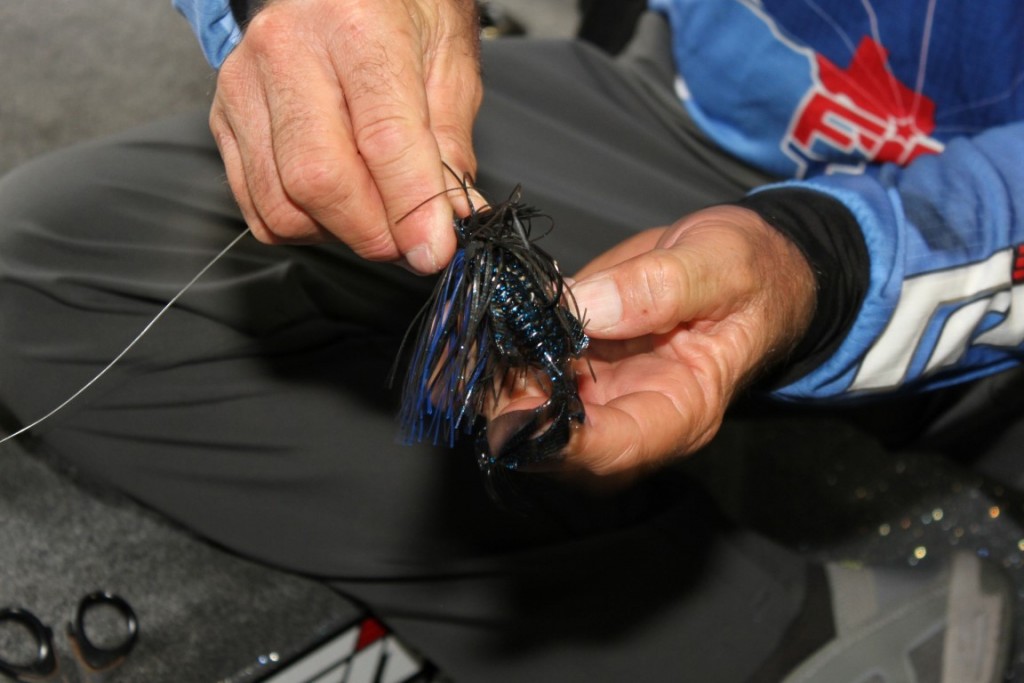 Push the soft plastic trailer all the way onto the hook, with the head pushed against the jighead. 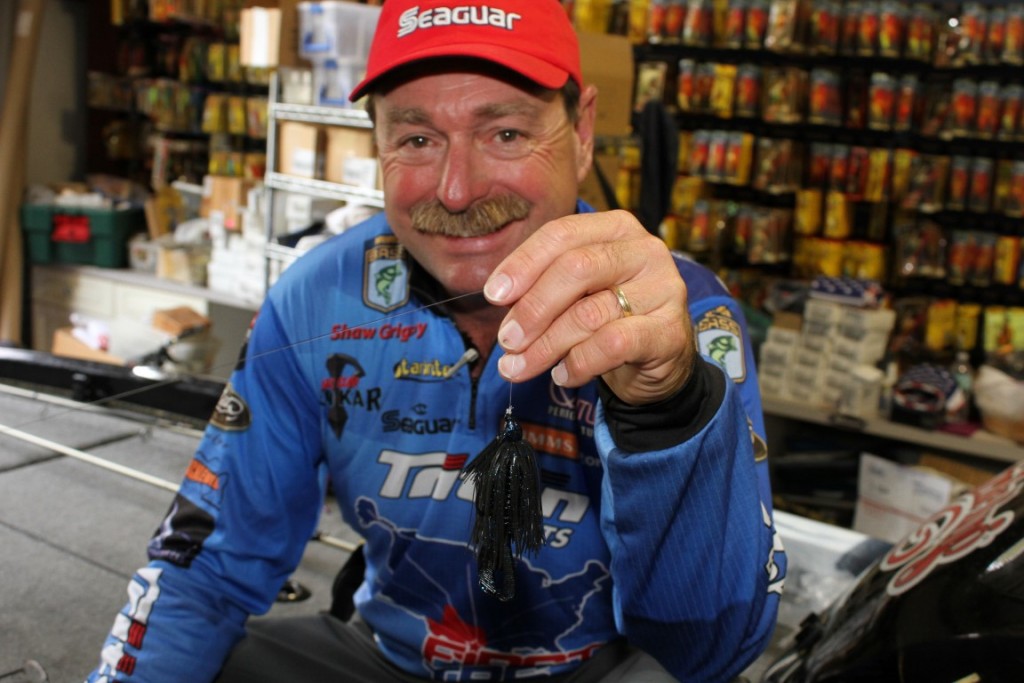 Make sure the body of the soft plastic hangs straight, as Grigsby shows here. 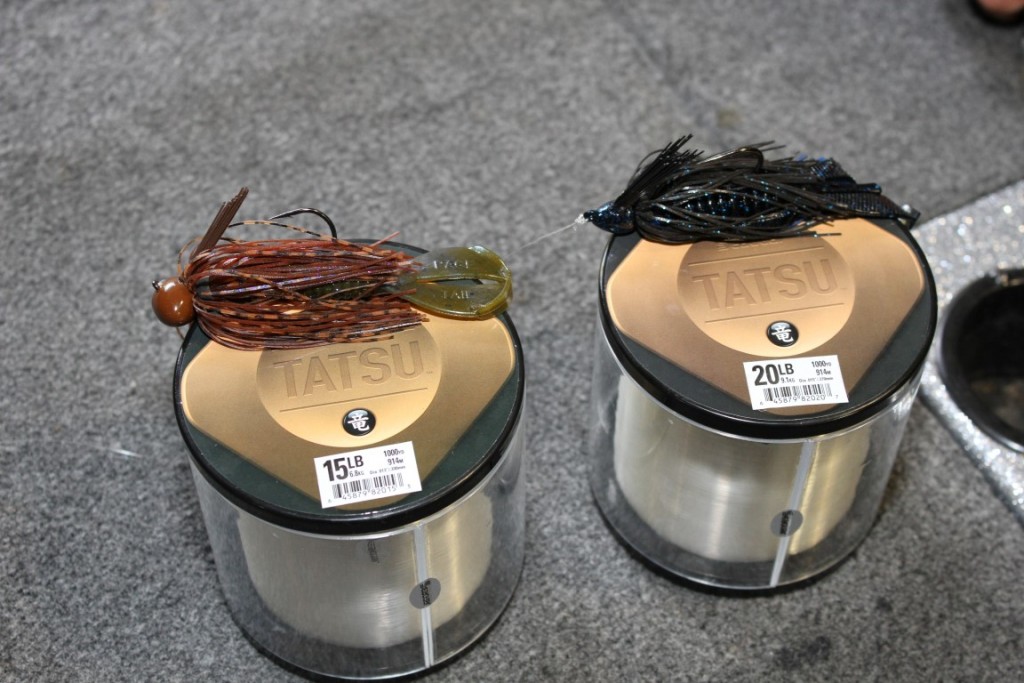 When rigged correctly with the right equipment, such as this high quality Seaguar Tatsu Fluorocarbon, a jig can be an excellent tool for catching quality bass, both shallow and deep.