Shaw Grigsby – Busy, But Loving It!

We’ve had a couple weeks off here since our last tournament, up at Lake Dardanelle in Arkansas, and you know since then, most of my competitors have had time off to go play and stuff like that; not me. 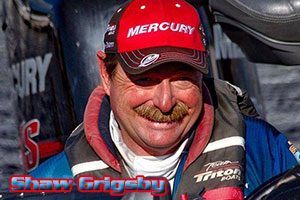 So, in my last couple of weeks I went up and did a charity tournament on Guntersville, which is really kind of unique and fun. At this time is been going on for 18 years, and it’s called the Coaches Kicking Bass tournament. It comprises a bunch of anglers that get into this thing and they take high school and college coaches fishing for the day in a tournament on Lake Guntersville.

It’s a really neat tournament put on by The Orthodpaedic Center in Huntsville, and the proceeds go to three really neat charities. One of them is just an awesome deal where it takes homeless kids and kids that haven’t had much luck with life and they take care of them. So, there there’s some really good attributes of this whole program. I had a great week there.

I got to fish with the Florida Gators tight end and special teams coach Greg Nord for a three fish limit. I practiced for a day or so and Guntersville is fishing pretty tough, but still Guntersville is one of those lakes where you better have three fish that go 17, 18, 19, 20, to have a chance. So we’re basically only looking for big ones, and we caught three right off the bat, had them on Strike Kingng Bullworms paired up with a Tour Grade Tungsten Bullet Weight and a 7/0 Eagle Claw TroKar TK120 hook and that 20 pound of Seaguar AbrazX line spooled on my Vapor reel from Quantum, just smooth as can be.

We were Texas Rigging these worms so you can just drag them on the bottom and kind of crank it a little and drag out a bit more and then they absolutely club it, while working it through the milfoil grass and vegetation.

So we got a limit we went hunting for big ones and finally caught up a real nice one – about five to six pounds and so we managed to come in to weigh-in with 11 something; not enough to win, but we had fun.

After that I hustled home for Father’s Day got in late Saturday night, actually early on Father’s Day morning. I got in spend Father’s Day with the family and then immediately get up on Monday morning and go down to Lake City to Florida Gateway College, to help with a kids fishing camp.

I got to participate in that and be kind of the keynote speaker and hang out there and do one of their one of their teaching classes.  It was a lot of fun to meet the kids and spend time with them.

You know, professional fishing isn’t all about being out on the water and fishing, you just have a lot more to do and a lot more people that you can influence to enjoy and teach the sport to, because fishing is just the most awesome sport out there.

I’ve been really, really busy since we reached the midpoint of our season, but I’m having a lot of fun doing it.