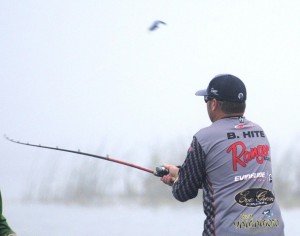 Throughout the years, anglers’ names become synonymous with techniques they are known for. As an angler masters a technique and produces high visibility victories on it, he becomes known as the one that defines it.
Brauer and Biffle go with Flippin’ like peas and carrots, Fritts does with crankbaits, Velvick and swimbaits, Lowen and swim jigs, Rojas with Frogs, and the list goes on.

We need to add one to that list – Brett Hite and vibrating jigs.

In case you just got into following professional fishing two weeks ago, or if you didn’t know, Since 2008, Hite has won four major events on the vibrating jig. He won an FLW Tour event on Lake Toho on it in 2008, then traveled across the country and won an FLW Series Western Division event on the California Delta two weeks later. Then this season, he won the FLW Tour Lake Okeechobee opener in January and the first stop on the Bassmaster Elite Series at Lake Seminole in March; all on the vibrating jig.

Those four wins add up to nearly a half million dollars, and coupled with other high finishes on it throughout the years, it’s likely he has won upwards of $750,000 on the lure.

Hite defined this technique as his own not only because of the money he’s earned on it, but also because he took the technique apart, and reconstructed it; solving some of the problems often associated with it.

A Bad Rap
Chatterbaits hit the public consciousness at large in 2006 when some national tournaments were won on it, and Rick Morris finished second using it in the Bassmaster Classic. Anglers everywhere flocked to get their hands on them, prices skyrocketed as supply was scarce. 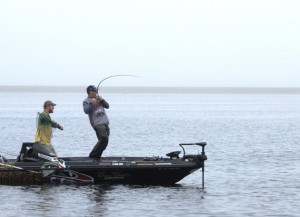 As more anglers began using them, they made the obvious distinction that the lure was a jig with a blade, and threw them on heavy action jig rods, braided line and stout gear. Many of them started losing fish, they began deeming them as inefficient and they got put away come tournament time.

“That’s where so many of my competitors and other anglers go wrong with a Chatterbait,” said Hite. “They view it as a jig, so they go heavy with it and they create more problems for themselves; I think of it as a single hook crankbait with a swimbait profile. I can throw it shallower and in more places than I can a lipless crankbait or squarebill crankbait.”

Vibe Jig Gear
Because he views it as a crankbait, Hite chooses to throw it on a fiberglass rod, as he would with crankbaits, jerkbaits or spinnerbaits. His rod is a 7’3″ heavy action Evergreen Power Glass Series Leopard model that is designed for large crankbaits and spinnerbaits. he matches that with a Shimano Chronarch Ci4 6.2:1 retrieve reel and 20-pound-test Sunline FC Sniper clear Fluorocarbon.

“The whole setup is built to allow the fish to take the lure in deeply,” he said. “A graphite rod reacts to quickly and I pull the bait from the fish’s mouth when I react to the violent strikes I get on the lure.”

Lure Specs
While he used to solely use the Phenix Vibrating jig that is no longer in production, Hite now uses the ZMan Original Chatterbait Elite. “They’ve added a 5/0 Gamakatsu hook and black blades to the darker colors, and that’s what I like,” he said. “I throw green pumpkin with a black blade most of the time, mix it up with black and blue occasionally and throw a shad pattern around the shad spawn and the fall when they are chasing shad.” 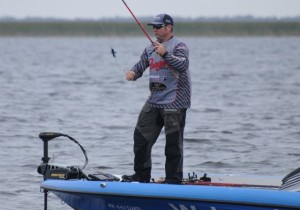 He said he most often uses the 3/8-ounce size, but will go with the 1/2-ounce when he needs to get it a little deeper.
His trailer choice is built around making the lure look like a swimbait. He most often uses a four and half inch Gary Yamamoto Custom Baits Swim Senko, but will upsize to the five inch and five and a half inch models if he is fishing a lake with larger bass. He uses colors to match the lure color, and on the green pumpkin, he dips the tail chartreuse.

He does experiment with other swimbait trailers, Yamamoto double tailed grubs and craws as well, but typically prefers the boot tailed model as his primary.

Where and How to Throw It
Hite said that he prefers to use a Chatterbait around grass. “It is probably the most effective grass fishing reaction lure I have ever used,” he said. “Everyone knows how great a lipless crankbait is around grass, but this is better.”

In grass, he said it is key to make contact with the vegetation. “I reel it up to the grass and try to keep it at a pace that allows it to hit the grass without bogging down in it,” he said. “If it bogs down, I’m going too slow, if I’m not touching it, I’m reeling too fast; I can also control the depth by raising and lowering the rod tip.” 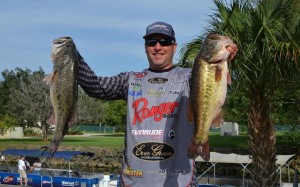 Like most reaction baits, he prefers a little breeze to break up the water, making fish strike more aggressively. If he encounters slick conditions, he will often turn to a swim jig with the same color and trailer to give it a more subtle appearance in the water.

Final Thoughts
Hite said that he encourages anglers to throw it like they would a spinnerbait. “Try it in the same places you would a blade,” he said. “It will catch those same fish, but will often make a larger fish strike because of the blade and the swimbait appearance.”

He also said the real key is to not try and set the hook hard. “When I get a bite, I keep reeling until the fish loads the rod, then I just lean sideways,” he said. “I make the fish eat it completely that way instead of pulling it away from him; that, and my rod, has really increased my hook to land ratios with the Chaterbait.”