Hello, I’m checking in from Falcon Lake in South Texas. I got to spend a couple of days here with a good friend of mine, Chris Rodino from Southern California, and I put him on a plane and now I am going to do a little bit of fishing down here.

I also had some people coming in and I did a little bit of guiding on Falcon last week to make a little extra Christmas money.

So you know, I really like South Texas; I really like Amistad and Falcon and all of this area down here. Iâ€™m really kind of a fan of that desert landscape, it makes me feel like Iâ€™m back on the West Coast fishing Lake Mead and the Colorado River lakes whether it is Havasu, Mead or Powell.

These types of lakes really are different kind of landscape, but just the same kind of arid climate that I like and just that desert-scape that is so pretty to me and it has its own kind of beauty there. It is a kind of special way that God has created it. 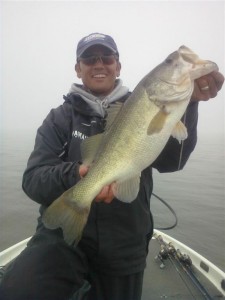 Anyways, I am having a good time. After Chris left I went out a little bit by myself; I was just looking for some stuff for the guide trips and getting ready for really high forecasted winds and some rain again in the latter part of the weekend.

Overall, the fishing has been kind of hit and miss; I mean, it is not what you would expect from Falcon. But it is; the water temperatures have dropped in the last month â€“ probably 15 degrees, and that has cooled the school bite as well. We really havenâ€™t been getting the numbers we usually see; but on the good side, the quality is still there. I caught two in that last few days that were approaching nine pounds; I donâ€™t know if they quite hit the 10-pound mark because I didnâ€™t really weigh them.

Iâ€™ve been catching them on a couple of different baits; the Strike King Series 6XD is just really strong. Putting it on that 7â€™4â€ St. Croix Mojo Bass Crankster and that Ardent XS 1000 and cranking it with 10 and 12 pound test Sunline Shooter.

That setup really helps get that bait down pretty deep and I can hit some stuff in that 17 to 20 foot range and the other baits that are working really well is the Strike King Football Jig that is really good with a Rage Craw on the back.
Iâ€™ve really been trying a couple of different things and having a good time. I wish the weather would kind of stabilize a little. I think that would really make things better, but itâ€™s been; a front will come rolling through with north winds and it will cool things down; then weâ€™ll get the south winds again and warm things back up.

You know, it is just a false sense of reality, but it is good to be out and playing in kind of fantasy land down here in South Texas on Lake Falcon.

Hopefully Iâ€™ll have some new announcements coming up and I am excited about 2012 and a new season coming around the corner here.

Talk to you in a week or so.