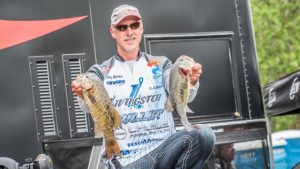 LA CROSSE, Wis. (May 19, 2017) – Livingston Lures pro Andy Morgan of Dayton, Tennessee, caught a five-bass limit weighing 14 pounds, 9 ounces Friday to capture the lead at the FLW Tour on the Mississippi River presented by Evinrude with a two-day catch of 10 bass totaling 31-4. He now holds a slim 4-ounce lead after Day Two of the four-day event that features 160 of the world’s best bass-fishing professionals casting for a top award of up to $125,000.

“This is my type of event,” said Morgan, a 19-time Forrest Wood Cup qualifier and the reigning FLW Tour Angler of the Year. “It’s a slugfest, but it’s not. You have to get a couple of decent bites – a 4-pounder – and if you can get a couple of those you’re in the game. I’ve never been here before, but I know that the Mississippi River is one of the best shallow water fisheries in the country. You come up here and you get busy.”

Morgan said that he caught fish Thursday in both Pools No. 8 and 9, but the bulk of his fish Friday came from Pool No. 9. He weighed in a limit consisting of three largemouth and two smallmouth on both days of competition.

“It’s just kind of dumb luck when I catch a smallmouth,” he said.

“There are several guys that made the cut and we’re all kind of in one general area, and today they were just biting,” Morgan said. “I caught a bunch of fish yesterday, but today I only caught maybe nine. It got cold, it got tough, but the mud is the concern. It painted me into a little bit of a corner today where I didn’t have as much water to run, so that’s going to be an issue come Day Three.”

The top 20 pros that made the Buck Knives Cut and will fish Saturday on the Mississippi River are:

James Watson of Lampe, Missouri, earned the Big Bass award on the pro side Friday, weighing a 4-pound, 10-ounce largemouth to win the $500 prize.

Overall there were 675 bass weighing 1,629 pounds even caught by 153 pros Friday. The catch included 112 five-bass limits.

The top 10 co-anglers on the Mississippi River finished:

Bailey Boutries of Daphne, Alabama, earned $250 for the Big Bass award in the co-angler division Friday with a 5-pound, 6-ounce bass.

In FLW Tour competition, pros and co-anglers are randomly paired each day, with pros supplying the boat, controlling boat movement and competing against other pros. Co-anglers fish from the back deck against other co-anglers. The full field of anglers competed Thursday and Friday. Co-angler competition concluded following Friday’s weigh-in, while the top 20 pros based on their two-day accumulated weight advance to Saturday. Only the top 10 pros continue competition Sunday, with the winner determined by the heaviest accumulated weight from the four days of competition.

The total purse for the FLW Tour at Mississippi River presented by Evinrude is more than $800,000, including $10,000 through 50th place in the Pro Division. The tournament is hosted by Explore La Crosse

Prior to the weigh-ins Saturday and Sunday, fans are invited to experience the free Fishing Expo at Veterans Freedom Park from noon to 4 pm. The Expo is a unique opportunity for fishing fans to meet their favorite anglers, enjoy interactive games, activities and giveaways provided by FLW sponsors, and learn more about the sport of fishing and other outdoor activities.

Youth are also invited to participate in the free FLW Foundation’s Unified Fishing Derby at Copeland Park, located at 1130 Copeland Park Drive in La Crosse, on Saturday, May 20, from 9-11 a.m. The event, hosted by FLW Foundation pro Cody Kelley along with other FLW Tour anglers, is free and open to area youth (18 years of age and younger) and Special Olympics athletes (all ages). Rods and reels are available for the first 50 participants to use, but youth are encouraged to bring their own if they own one.