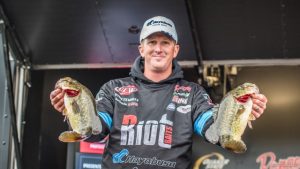 LA CROSSE, Wis. (May 20, 2017) – Pro Bryan Schmitt of Deale, Maryland, brought a five-bass limit to the scale Saturday weighing 15 pounds, 12 ounces to take the lead at the FLW Tour on the Mississippi River presented by Evinrude with a three-day cumulative total of 15 bass totaling 46-12. He now holds a 12-ounce advantage over Day Two leader Andy Morgan heading into the final day of the four-day event that featured 160 of the world’s best bass-fishing professionals casting for a top award of up to $125,000.

Schmitt, a renowned river and tidal-water specialist, said that he caught his fish Saturday throwing a swimjig and a vibrating jig through sparse grass. While other competitors have weighed in mixed bags of largemouth and smallmouth bass throughout the week, Schmitt’s limits each day have consisted entirely of largemouth.

“I feel comfortable fishing here,” said Schmitt, a five-year veteran with four prior top-10 finishes in FLW Tour competition. “It’s almost like we had an incoming tide, all day. The water is rising so quickly that I literally watched grass that I was fishing go below the surface. My area is changing every day and I have got to just keep changing with it.

“This afternoon got really good for about an hour or so,” Schmitt continued. “It seems to turn on every afternoon. I’m catching 20 to 25 fish a day and weeding through a lot of little ones.”

Schmitt’s previous best-finish in FLW Tour competition was a fourth place finish on the Potomac River in 2011, and he has never led an FLW Tour event before. He admitted to feeling nervous with pros like Andy Morgan, Larry Nixon and David Dudley in striking range behind him.

“This is one of those tournaments that is going to come down to ounces,” Schmitt said. “I’m going to try my best tomorrow and I’m excited to get back out there. But, it can easily go away from me here. There are a lot of good fisherman behind me. So I am nervous. But I want it bad. It would mean so much to get a win.”

The top 10 advancing to the final day of competition Sunday on the Mississippi River are:

Overall there were 97 bass weighing 241 pounds, 8 ounces caught by pros Saturday. Nineteen of the final 20 pros weighed in five-bass limits.

In FLW Tour competition, pros and co-anglers are randomly paired each day, with pros supplying the boat, controlling boat movement and competing against other pros. Co-anglers fish from the back deck against other co-anglers. The full field of anglers competed Thursday and Friday. Co-angler competition concluded following Friday’s weigh-in, while the top 20 pros based on their two-day accumulated weight advance to Saturday. Only the top 10 pros continue competition Sunday, with the winner determined by the heaviest accumulated weight from the four days of competition.

Prior to the weigh-in Sunday, fans are invited to experience the free Fishing Expo at Veterans Freedom Park from noon to 4 p.m. The Expo is a unique opportunity for fishing fans to meet their favorite anglers, enjoy interactive games, activities and giveaways provided by FLW sponsors, and learn more about the sport of fishing and other outdoor activities.

The total purse for the FLW Tour at Mississippi River presented by Evinrude is more than $800,000, including $10,000 through 50th place in the Pro Division. The tournament is hosted by Explore La Crosse