Anyone who follows the pro bass tours knows that Ish Monroe is a shallow water junkie. The shallower he can catch them, the more at home he feels. Whenever there is clumped grass; you’ll find Ish there, wherever you find matted weeds, Ish will be there; find tangled wood, reeds or trash, you’ll find Ish there.

His penchant for skinny water has birthed his signature Snag Proof Phat Frog, and a public recognition of his with heavy tungsten weights, braided line, stout rods and thick gauge hooks is inevitable. So committed is he to shallow, nasty water, that he keeps two rods rigged at all times; Flipping and Punching rod and his Frog rod. 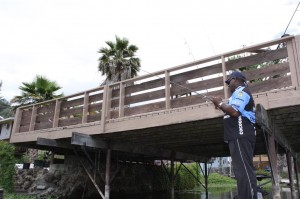 While those two rods are notorious for producing big bites in grime infested skinny water; Monroe has found them to be effective at other times as well. He said that experimenting with his friend; former Bassmaster Tour pro and Western FLW Pro Zack Thompson, has showed him that they are effective elsewhere.
“I was with Zack in Frank’s Tract – in the middle of the Delta – one day when he told me to watch him,” said Monroe. “He grabbed the Flippin’ Stick he had been Punching matted hyacinth with and made a cast to the middle of the bay.” Monroe said that at first he thought it Thompson was being funny, but when it produced a solid keeper, Monroe took notice.

Since that day, the Hughson, Calif. pro has experimented with the technique all over the country and has found it to be very effective. So much so that he has given the technique a name – “Droppin’ Bombs,” he said. “I use it to shake them up and make them bite when they’re sluggish; and it really works.”

Heavy for the Extremes
Going to the extremes of weight in a lure is an option at certain times of the year. There are times that a weightless lure will make a bass bite in hot or cold water, and there are times that the opposite happens. Stories of switching to a heavy jig or a big worm weight in super hot or super cold water are frequently told.

There are times that waters across the country reach as much as 100 degrees, and when that happens, bass don’t always like to feed – until they have to. When that happens, anglers often try putting a 3/4 to 1-ounce jig on their line, or using a heavy tungsten Flipping weight on a Texas Rig to make fish react. 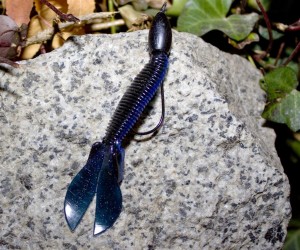 The high rate of speed of a heavy lure falling past their noses in cover or around structure can make a bass strike out of impulse when a slow moving lure won’t even make them move. Monroe believes that this response can be triggered at any time, and any depth range. So, he uses the same rig that he Flips with to trigger those strikes.

Bomb Gear
Monroe said he uses the same setup for casting a Bomb Rig than he does for Flipping it because the length and power of the rod helps him control the bait better on the cast. “If I try and lighten up on the rod for more tip, then it takes more effort to cast the rig,” he said. “I also need the length to seep the lure up off the bottom to mimic stroking a jig, so a longer rod helps with that too.”

His rod choice is an 8’ Daiwa Steez SVF Compile X Flipping rod matched with a Type R Zillion 7.3:1 reel and70-pound-test Samurai Braid. He starts with a one-ounce River2Sea Tungsten Trash Bomb sinker then ties aPaycheck Baits Punch Hook on his line with a modified Snell Knot. He said he likes the Trash Bomb because it has a Natural Matte finish on the sinker, which is durable, but doesn’t send of unnatural flash to the bass.

In the past he has used every manner of creature bait on the market, but when he recently signed with the brand new Missile Baits Company founded by his friend and Elite Series roommate John Crews; the new D Bomb creature bait became his new favorite. “The D Bomb is a little bulkier, so it appeals to larger fish, and I can put a larger hook in it; even a 6/0 Punch Hook,” said Monroe. “It has a meaty, solid head before the rings start on the body, so it holds the hook well when I’m ripping it off the bottom. But, the ringed body makes the fish hold on because it feels so soft in their mouth – it’s the best of both worlds, durability and softness.”

Cast and Hop
Monroe said that he makes a long cast past a piece of offshore structure and lets the lure fall vertically past the fish. Once it hits bottom, the lure creates a puff from slamming into the bottom and stirring up silt; strikes usually occur then. If he doesn’t get a strike on the initial fall, he lift the lure up off the bottom, allows it to fall on semi-slack line again, repeating the motion until he is past the structure. 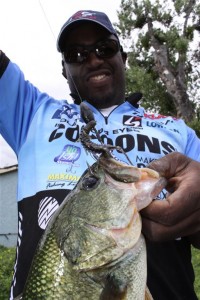 He uses a similar approach around vertical cover such as docks or standing timber. “The speed of the fall can trigger strikes from fish relating to dock pilings or standing timber,” he said. “I pitch this out near the cover and let it fall straight down with the reel in free spool. If a bass strikes, I turn the reel handle and set the hook. If it hits a limb and stops, I shake it off and let it fall some more; it’s an awesome way to trigger reaction strikes.”

When?
While he first started using the technique in extremely hot or extremely cold water, Monroe said it works all the time. “I pretty much have it tied on all the time except for the actual spawn,” he said. “I’ve caught them on it around docks during postspawn, on offshore ledges during summer and again in the fall. The only other time I don’t throw it is on heavy rockpiles because the heavy sinker can get wedged pretty easily, but it is effective in a lot of areas and different times of the year.”