Being Yourself On the Water 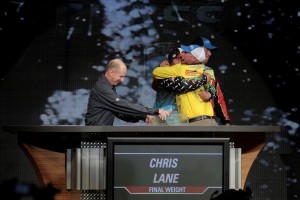 The older I get, the more I realize that I need to be myself. Whether that means being consistent as a person, a Christian, a husband a father or being realistic with myself in all facets of myself, I need to be honest with me, about me. I’ve also needed to learn to operate within my strengths in operating my business and other facets of my life.

Sure, I need to learn to make improvements and learn to overcome my natural or learned weaknesses, but even in those, if I want to be able to make those improvements permanent, I need to learn to fix them in a manner that is consistent with who I am. My dad told me a rule to live by when I was young about being untruthful and it went like this. “If you lie, you have to remember everything you’ve ever said to anyone; so choose to live in the truth and you won’t run into issues with it.”

I think a similar thought can be applied to making self-improvements in any part of our lives. If those adjustments don’t fit into how we would normally operate, then they are not likely to become a part of how we do things.

Here is an example. My wife is incredibly organized. She can take a pile of 1000 widgets and turn it into something orderly that would make a librarian proud. I on the other hand, am not that way. I tend to operate on the blow and go method of living.

My manner has always been to grab what I need, drop what I don’t and keep moving forward. I’ve learned over the years to help try and keep her sane by keeping myself confined to a certain few areas and to find some semblance of a method to keep myself on task and from misplacing everything. If I tried to be exactly like her in this arena, I would be overanxious and feel out of sorts.

I think this can apply to us as anglers as well.

Be Like…
As fans of the sport of bass fishing, I assume we all watch the pros fishing on the Elite Series and FLW Tour and imagine ourselves being like them. We see the enthusiasm of Iaconelli, the dedication of Klein, the ease of Reese, the dominance and speed of VanDam and the mastery of a Morgan or Thrift and we try to emulate them.

Many of us tend to pay attention to their styles, the lessons they teach through media and seminars and try to do just like them – or at the least, closely mimic them. In doing so, we try to develop mechanics that we believe matches them in an effort to try and become like them.

The problem with any of us trying to become like one of them is that we set our own development process back by doing so.

Your Bent = Your Style
If you are a methodical person, then the likelihood of you being able to adopt a run and gun style of fishing is not very high. Likewise, if you are a person who likes to move at 100 MPH all the time, then learning how to slow down and “count rocks” with a bottom bouncing technique is not something you are going to be able to do with ease.

Developing your personal style of fishing is a process that works out best when you factor in your own personal style as the primary method of decision. If you are a mellow, laid back individual, then deciding to be a power fisherman is something that would lead to you being in a rush, and potentially cause you to overlook details and clues that could help you perform better. 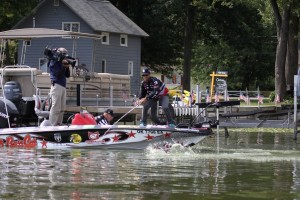 Likewise, if you are naturally a person who is very aggressive and you do everything at mach speed, then deciding to adopt a slow, grind it out style is something that will create a restlessness in your approach and cause you to overwork your lure, and lead to missed opportunities.

Celebrate and Vent
There are people who have long been critical of some of the sport’s most aggressive personalities. People see the way that Iaconelli responds to stimulus and they tend to get upset by his “antics.” I was having a conversation with former professional angler Marty Stone about Iaconelli, and he related a story to me about Iaconelli being on his first deer hunt with Stone. When they witnessed their first deer, and took their first shot, Iaconelli become just as excited and animated as he does on the water, and Stone said that he realized that he was being very true to who he is.

Likewise, I was doing a photoshoot with Klein at a Toyota / Quantum / Carhartt media junket at Table Rock Lake a few years ago when I witnessed the Texas angler’s legendary cool countenance. Klein was positioning himself for a series of photos with a dropshot caught smallmouth bass, and I was on a dock in front of him. While he was switching hands with a close to four-pound smallmouth bass, the fish wiggled and fell into the water.

Klein tightened up on his rod as the fish began thrashing about on the surface near his boat. Sensing an opportunity at a live catch moment, I began snapping images. Klein began chasing the fish with his hands, frantically (I thought) grasping for the bass in an attempt to control it for nearly half a minute before wrangling it, lipping it and bringing it into position for the pictures. 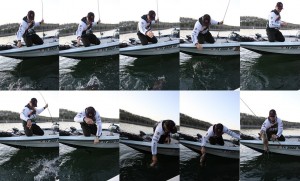 While I was looking at the photos some time later, I realized that his facial expression never changed. Instead of having a panicked expression of a man frantically trying to chase down a fish, his expression was emotionless as his hands were rapidly tracking and controlling the fish.

What Does This Mean?
To wrap all of this up, each of us needs to examine our own personal style, and our own natural tendencies in order to develop the way we do everything from home to launch ramp to the water. Once we begin to analyze our tendencies we can begin to make a plan, build our methods and enhance our skillsets based on who we are.

If you are an angler who likes to think out loud, then talk while you fish. If you are an angler who is prone to vocalizing loudly when you make a mistake, then do so. Likewise, if you process internally, then fish in silence, and if a temper tantrum for you after a lost fish is nothing more than a head shake and an eye roll, then embrace it, and move on.

Granted, we all have things that we need to improve upon, and we all likely have to learn how to temper some of our reactions on the extremes of our experiences, but we should still learn how to do things in a manner that is befitting our makeup.

We at AdvancedAngler.com have a friend by the name of Charles Plott, who is a performance consultant who specializes in the mental world of competitive athletes. He wrote some interesting columns on topics like these in the early years of the site. He calls is building your competitive identity, and a lot of what he says can be found here in his blogs; they’re worth taking a look at. https://advancedangler.com/?s=Mental+Fishing