Is a Bass Really a Bass Everywhere? 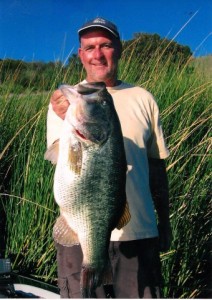 The old adage states that a bass is a bass.  While that statement is intended to signify that bass have the same basic characteristics everywhere we travel to fish; the truth is that it’s not that simple.  Sure, a bass has certain needs, and we can basically have a starting point of deciding their whereabouts based on seasonal patterns, but to truly catch bass everywhere, it becomes a little more complex.

Until I started traveling to cover the professional bass fishing scene, my fishing experience had largely been Western.  With that said, my basis for decision making, and the ways in which I was comfortable fishing were based on a certain set of variables, no matter where I went.

So, when I would fish eastern impoundments, southern impoundments or lakes at home that had a lot in common with other areas of the country, I would have a set of tools that often didn’t match the situation I was faced with.

I don’t typically write from a first person perspective here on Advanced Angler; especially about fishing topics, because after all, you would rather hear from the anglers I get to interview rather than me.  No matter my skill set on the water – even if I started winning every event I entered at home – the pros on tour are better by far, and my job is to help them teach you how to improve your fishing.

I was having a conversation today with my oldest friend in the fishing industry.  My friendship with him dates back to before I actually started 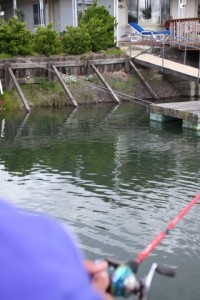 working in the industry at all.  I met John “Zank” Viazanko while I was a junior at The Master’s College in Santa Clarita, Calif., about 10 minutes from Castaic Lake; which at the time was at the tail end of its trophy largemouth heyday.

Zank and I reminisced about meeting and some of our fishing outings while I was at school, injured and unable to play baseball anymore.  We also talked about a trip I made to meet him while my wife Christina and I were on a week’s vacation to Southern California with some friends of ours.  Zank and I fished Castaic early one morning and another local lake that afternoon before he drove me into Hollywood to reconnect with Christina and our friends.

In the 80’s and 90’s Zank was a professional tournament angler, a guide and a hand poured worm maker.  His roots in fishing make him the second generation hand poured worm maker.  His molds were precise, and his colors were different and more natural than any other on the market.  He was, and still is, one of the best worm fishermen I’ve ever been around.  His touch with a shaking worm or a split shot was amazing.  With that in mind, Zank is always locked in to the worm bite at Castaic.  With good reason, he catches the snot out of bass on them.

We were on Castaic, and we were fishing his worms and catching a few fish on them.  The water was clear, and the fish were fairly deep; say 15 to 25 feet.  We came across an area that was an inside point with wind blowing on it, and the wind was creating a mudline.  I thought of my days fishing lakes at home, and fish often get into mudlines.

I asked Zank if he had any crankbaits – which was a long shot mind you – but, he did have a Norman Deep Little N in Lavender Shad tied on from a 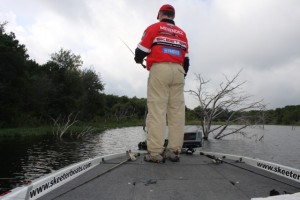 previous night fishing outing.  I reached into his rod locker and while he was telling me that I probably wouldn’t get any bites on it, I caught two fish, including a three and a half pounder that was the big fish of the morning.  That was it, two fish, and then Zank proceeded to go back to kicking my butt with his worm.

I am not a third the fisherman Zank is, and my point is not to make fun of him, or to say I figured something out that he didn’t.  The point is that he was so locked in to his local perspective that he wasn’t keeping an open mind and trying new things.

What I’ve learned while covering the Bassmaster Elite Series, FLW Tour and Major League Fishing is that bass can be different than we expect based on the conditions they live in, and their seasonal conditions as well. 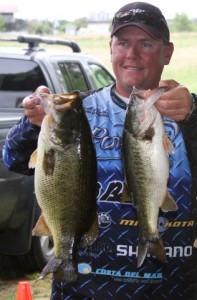 Take for instance this time of the year.  The hottest water I typically fish at home – with the exception of Clear Lake, is in the mid 80’s.  Our lakes don’t get super hot, and the constant current of the California Delta typically keeps things cooler.  So, as a rule, in summer, I think primarily about fishing deeper water.  On clear water lakes, 20 to 30 feet is the norm, and the Delta, banks with 10 or more feet is also fairly common.

Clear Lake, I’ve learned, is different.  Clear Lake can get really warm in areas, with water temperatures reaching into the mid 90’s.

With my experience, I typically look for deeper holes, but while fishing with another friend of mine, I learned differently.

Chad Martin is a Western pro tournament angler who is a transplant from Arkansas.  Chad brings an Ozark / Southern skillset to the table, but has matched it with Western tricks, and he too is quite good.  He has won a boat and other Pro Ams and is always a threat in Western Circuits.

Chad and I were fishing at Clear Lake in July; it was hot and water temperatures were in the high 80’s in the morning, climbing to the low 90’s in the afternoon.  We were fun fishing in my boat, and Chad was picking the areas to fish.  I expected to go to deeper water with jigs and Shaky Heads, but Chad went straight to the bank and started catching bass on frogs in less than two feet of water around Hyacinth and Primrose. 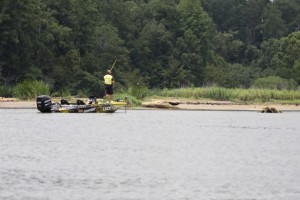 It caught me by surprise, but it wouldn’t be the last time I see that situation.

I was at the 2010 Bassmaster Postseason in Alabama, and was surprised to see the anglers catching fish shallow on a clear water like lake Jordan, and I was blown away at how shallow they were fishing on the Alabama River.  It reminded me of my experience at Clear Lake, and in talking about it with my boat drivers Jim Hardy from NetBait and Outdoor Friends Forever and William Davis from Davis Bait Company, they told me that the reason is because hot water has less oxygen.

Bass have to have a minimum level of oxygen to survive, and hot water means the only areas that will have oxygen; especially in stained or dirtier waters, is going to be near the surface.  On one hand, the bass is a bass concept in play with the need for oxygen, but also a perspective that I didn’t have. 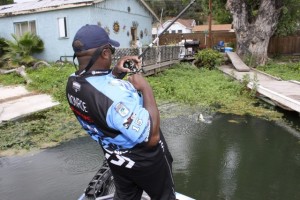 Fishing Differently
I’ve also found some things in interviewing the best anglers in the business is that they learn to adapt.  We hear anglers talk about fishing fast in the summer, but that doesn’t mean that they put their trolling motors on 100-percent and run down every bank throwing crankbaits or spinnerbaits.

Sure, they throw reaction baits a lot, but in summer, the vast majority of them end up picking up a Flipping Rod in summer and making bass respond to their presentation.  Again, speed is discussed frequently, but in this instance, they are referring to using a 3/4 to 1-ounce jig with the skirt thinned out and a thin trailer without flapping appendages on it to slow the fall.  They make quiet 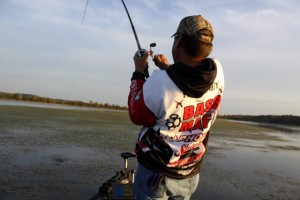 presentations around super shallow cover and let the heavyweight lures fall quickly, hit bottom hard and make bass react to a jig.  This is one way to get better quality bites in summer.

What’s the Point?
Well, what I’ve learned from following and working with the pros is that it helps to keep an open mind.  It helps to try and look at things from a different perspective than those we are naturally inclined to from time to time, because the way we learned initially may not have complete applicability to the situation we find ourselves in on the water today.

But, that is one of the things that makes our sport so great; it’s rarely the same thing twice.  Every day presents new challenges and each piece of the puzzle can have an effect that we hadn’t considered.

Have fun out there and remember, we’re all trying to Elevate our own Fishing to the Next Level – No matter the level we’re on.