Does your summer fishing ever get kind of stale?  Do you ever make a cast and get that not so fresh feeling about it? 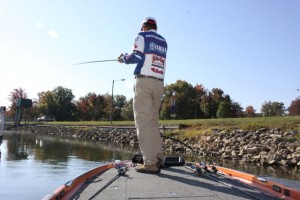 When bass make their final moves into their summer patterns, they can be there for a long time.  On many lakes across our country, bass line up on the same type of pattern, and it is not uncommon to see dozens of boats fishing the same way.

Take for instance Tennessee River lakes like Pickwick, Guntersville, Kentucky Lake and Wheeler.  These long, narrow bodies of water allow a person to see most of the lake for miles.  In the summertime, the ledges that make up the original river channel will be the primary location for much of the field.  When that happens, it’s possible to see boats lined up on the sweet spots of ledges for miles while you’re driving to your next fishing spot.  You can also find crowds of anglers fishing some of the more popular spots or bigger schools of fish.

To be competitive in tournaments, sometimes an angler needs to find something unique that can help differentiate him from the crowd.  Sure, an angler can slug it out on the main program, but a winning pattern is sometimes something that is often off the beaten path a little.

James Niggemeyer, an Elite Series Pro and Lake Fork Fishing Guide from Van, Tex. tries to look for those types of things.  He does it by using his electronics to get a sense of what is happening that day, and he also says he keeps his eyes open for surprises that may show up throughout the day.

“We all seem to be able to find the most obvious patterns on a given lake,” said Niggemeyer.  “But, it’s that one thing that can make the difference in one or two fish that can be difference makers, or an entirely different pattern altogether.”

We’ve discussed in the past how strong the skill set of most of the professionals on tour are.  Their ability to catch fish in a variety of ways is what makes them able to compete at the top levels.  However, while they are good at a variety of things, most of them have one or two dominant strengths.

For Niggemeyer, his preferred fishing conditions revolve around heavy cover in shallow water.  His preference would be to pick up his Flippin’ Stick and head to heavy matted vegetation, or some other shallow cover any chance he gets.  However, the tour schedule doesn’t always allow for him to fish that way.

“I’m sure if I had enough time that I could find one specific area of a lake that would allow me to do that type of fishing,” Niggemeyer said.  “But, with three days of practice for Elite Series events, we don’t have to time to cover the whole lake.  We have to find something to start on, and keep developing it as the event goes on.” 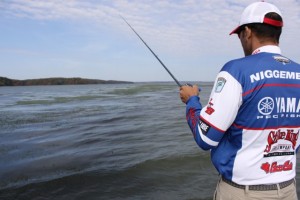 He relies heavily on what he calls opening his mental box.  “I have to keep an open mind out there and give myself every opportunity to see those things that can make a difference,” he said.   “I need to remain efficient, but at the same time, I can’t get so locked in that I overlook something good.”

His search for information begins the moment he touches the water.

Underwater Eyes
The search begins as he is idling his Bass Cat / Yamaha out of the marina.  He doesn’t just casually idle out of the channel and blast off in search of yonder fishing spots.  He pours over his Raymarine fishfinders on his console while idling out to start to gather clues as to what mode the fish are in.

The clues he is looking for typically involve baitfish. “The positioning of the baitfish will begin to start telling me how I can expect to fish for bass through the day,” he said.  “If they are down near the bottom, then I can start to think about fishing crankbaits and jigs, or if they are up in the water column, then I need to start thinking about topwaters and spoons.’

He can also start trying to get a sense of the types of bottom the fish are relating to.  “I use my Raymarine e97 to scan the water in 2D sonar, then look at everything in detail with my Dragonfly unit with the Chirp DownVision,” said Niggemeyer.  “This gives me a clear picture of not only how the baitfish are positioned, but also the type of bottom composition they are relating to.  I can see shell beds, sand, and rocky bottoms clearly, which let me recognize that type of bottom easier once I get out onto the lake.”

Keep Your Eyes Peeled
While most anglers remain vigilantly focused on making the most out of their pattern, Niggemeyer said that he has had several instances where seeing something while he is moving between fishing areas has made for a completely different outcome for his day.  “I’ve had it happen while at tournaments, but the most recent instance was while guiding on Lake Fork.”

He said that he and a client were changing spots and they slowed down to idle under one of the bridges that are common on the Lake, and they saw some activity on the water.  Niggemeyer said that they jumped up and were able to fill the boat with some impressive fish as a result. 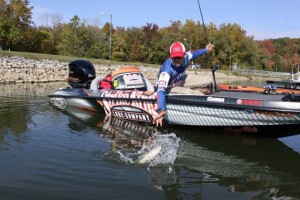 “We saw some bait fish moving around at the surface so we picked up Strike King Caffeine Shad swimbaits and started quickly retrieving them just under the surface,” he said.  “We caught quite a few quality fish in a flurry that really made for a lot of fun for my client.  Had I not been scanning the other side of the causeway, I would not have seen the activity, and would have missed that opportunity.”

Niggemeyer said that it doesn’t have to be schooling fish that tip off activity.  “Watch the birds as well,” he said.  “If you see gulls or other birds getting active, then that could signify something else that is going to happen that you can take advantage of to make  difference in your day.

“These are the kinds of things that can be a real difference when everyone is fishing the same patterns on a lake in the summertime,” he said.  “Be aware, and ready to try something for a few minutes, they can change the day.”