Blades in Fall with Jimmy Houston

10/7/2011 – Bass fishing legend Jimmy Houston is known for his decades as a television host on Jimmy Houston’s Outdoors. He is known for his prowess on the Bassmaster and FLW Tours, and he is known for having a boyish enjoyment of life. His favorite motto to live by, “Life is Good Today,” is exhibited by his glittering smile, his sparkling laugh and that blonde head of hair that still looks as if he is 20 years old.

Houston is also known for his skill with a spinnerbait.

Like any angler who competes on tour, Houston is an angler who can catch bass just about any way they can be caught. But, like many anglers who become known for their skill with a particular lure; Houston and a spinnerbait are like peanut butter and jelly. 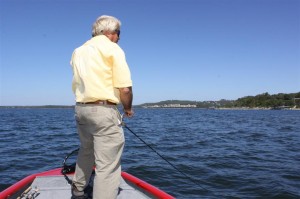 “I can’t think of a better lure for catching them most times of the year,” said Houston at the Tracker Marine Media days just last week. “But, when bass are up shallow and they are chasing shad; a spinnerbait in the shallows can be a great lure if you have the right conditions.”

Conditions for Clear Water Blades
Because of the spread of aquatic grasses across the country, many of our lakes tend toward lightly stained to fairly clear. Anytime he can see two feet more into the water, Houston considers fairly clear. That kind of visibility prompts him to look for certain conditions to throw a spinnerbait.

“I really like to see a stiff breeze in clear water,” he said. “The wind helps to break up the light penetrating into the water and helps the spinnerbait to more closely mimic baitfish swimming in the water. If there isn’t any wind, the spinnerbait can really be too much for bass and you won’t get any strikes.”

In clear water, Houston tends to look for banks with wind blowing directly into them, and if there is any visible cover, or bottom features he can retrieve the lure over; those are the places he starts. “Bass will move a long distance to hit a spinnerbait in clear water with a decent wind,” he said. “I try to keep the lure up in the water column and move it fairly quickly; bass will come off of a boulder or stump from ten feet or more to strike it.” 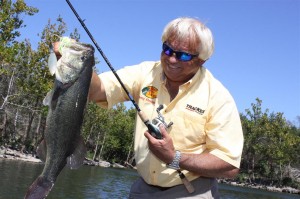 Conditions for Dirty Water Blades
Dirty water opens up more opportunities for anglers to try spinnerbaits. The low visibility in the water allows Houston to try and be a little more deliberate and target oriented with his placement. “Bass will get tight to hard cover in dirty water,” he said. “I like to place a spinnerbait just past the cover and retrieve it as close as possible to the stump, laydown or stickup.”

The presence of wind is not a bad thing in dirty water either. While bass don’t necessarily need the surface clutter to camouflage the lure, wind stirs up the plankton, which causes baitfish to get active as well as the bass.

See the Lure
Houston said the best tip he could provide to anglers to improve their success with spinnerbaits is to retrieve the lure deep enough that you can barely make out the flash of the blades turning in the water. Of course, the depth would be dictated by the clarity of the water, but he said there are reasons that spinnerbaits are more effective this way.

“The first thing is that spinnerbaits create more sound and flash when they are up in the water column,” he said. “Secondly, a bass’ eyes are at the top of his head, so he sees objects above him better than those retrieved below him.” 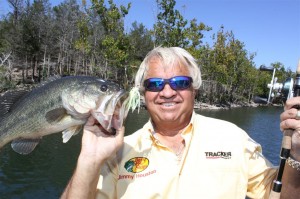 Lures
Houston relies on two of Booyah’s spinnerbait products primarily. In clear water, when speed and flash are at a premium, the double willowleaf Booyah Blade is his choice. “I usually use the 1/2-ounce version of this bait because I want to be able to make longer casts, and I need the bait to be more stable on the retrieve,” he said. “I keep the bait moving and up in the water column with this bait.”

If the water is dirty, he tends to pick up a bait that will present more vibration into the water. His choice is then for the Booyah Blade, but in the tandem, Colorado / willowleaf blade configuration; he also throws lighter baits. “I like the 3/8-ounce version in dirty water because it forces me to slow down my retrieve a little,” he said. I want the bait to stay in the strike zone a little longer in dirtier water.”

Houston believes that a spinnerbait needs to have three colors in it to be effective. “I always want a little chartreuse, a little white and a little blue in my spinnerbaits,” he said. “In most cases, I throw a chartreuse and white bait then use a pearl white / blue highlight YUM F2 Boogee Tail trailer for bulk and movement. I typically throw blades that are nickel and gold.” 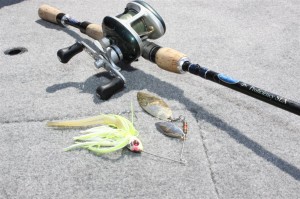 Equipment
Houston worked with HT Enterprises to produce a line of signature rods. His 7’ medium heavy Jimmy Houston Proficiency SLX is his choice for open water casting, but he uses a shorter 6’6” version for placing casts around cover. He pairs his rod with a U.S. Reel Effortless 700X casting reel with 6.55:1 retrieve speed, which he fills with 14 to 17-pound-test Berkley Trilene XT fishing line.

Be Ready
Because the fall is a time when things can happen quickly, Houston recommends having a spinnerbait rod ready at all times. “Even if you are fishing a jig or something else on the bottom, a spinnerbait can be excellent if fish boil near the boat on the surface,” he said. “When this happens, make a cast past the school and quickly retrieve it through the school near the surface; it sometimes will trigger a bigger fish to strike.”