Sightfishing Tips from the Pros

We all know that the springtime period can be one of the best for catching quality bass.  With bass in the shallows coming and going from the spawn, the likelihood of catching big fish; perhaps even a personal best, are great.

For a tournament angler, the springtime presents a chance to strategize and build a game plan completely encompassing spawning fish, or those close to the process on either side of it.  But being able to make the most of the period requires being able to maximize the opportunities. 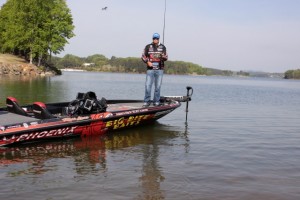 Having the opportunity to dissect the spawn with the pros who make their living at it is an invaluable tool.  Most of us would never get the opportunity to sit in the boat and talk our way through the spawn with the best in the business.  We try and dig up that information for you, and while we go to media events and tournaments, we are looking for ways to help you expand your fishing acumen.

Here are some tips we’ve learned from the best in the business.

Russ Lane – Keep Moving
The Big Bite Baits pro from Prattville, Ala. has a technique he uses to maximize his fish catching opportunities while he is looking for spawning bass.  Because not all bass in the lake spawn at one time, Lane likes to keep a bait in the water while he is scanning the bottom for spawning beds.

His favorite bait to throw is a Big Bite Baits Swimming Jerk Minnow.  He prefers the five-inch size, but will choose the four-inch if the bass don’t respond to the larger one.  He rigs the bait on a 5/0 offset shank, round bend Gamakatsu worm hook, with a light tungsten bullet sinker on the nose.  He ties it to 12 to 16-pound-test Sunline Shooter Fluorocarbon line.  He uses a 7′ medium-heavy action Castaway rod and a baitcasting reel with 6.5:1 reel to cast and retrieve the lure.

He makes casts into shallow water while moving the boat quickly with his trolling motor.  This method allows him to use the lure to scout for spawning fish, yet throw a lure that will attract quality bites.  The drawing power of the lure can actually make fish rise up off of their beds to chase the lure, and some of the pre and postspawn fish will also attack the lure. This 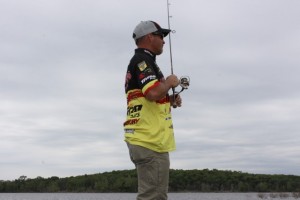 way he can be fishing a lure that he doesn’t have to focus all of his attention on.  It is an efficient way to fish and look for spawners.

Jeff Kriet – Fish, Don’t Sightfish
Another Big Bite Baits team member, Jeff Kriet from Ardmore, Okla., said that he prefers not to actually sight fish in competition.  He said that he believes he spends more time scanning the shallows looking for bedding fish than he does  fishing, and feels that it makes him less competitive.

So, instead of marking multiple individual spawners, Kriet will mark areas where spawning fish are located, then fish his way through the areas by keeping his boat deeper; off the spawning beds, and fish for them as if he were blind casting.

He likes to use a 7′ medium action Falcon Squirrel Tail rod and Abu Garcia Revo Premier spinning reel spooled with 15-pound-test Hi Seas Grand Slam braided line with about a six to seven foot leader of 8-pound-test Hi Seas 100% Fluorocarbon line.  He rigs a four-inch Big Bite Baits Squirrel Tail worm on a 3/16-ounce Jewel Squirrel Head. He prefers to throw green pumpkin or the Tilapia color and the vast majority of the time, Kriet dips the tail in chartreuse dye.

He said he relies on feel and line watching to signal him to a pickup by the bass.  He will feel the bass pickup the lure and then see the line swimming off to signal a bite.

Skeet Reese – Use the Sun
A talented and experienced sightfisherman, Reese honed his craft on California’s Clear Lake, and has found a few things that help him have a better chance at catching spawning fish.  One that he relies on a lot is to position his boat so that the sun helps camouflage him from the fish.  However, his thinking is oppostite of what most anglers would think.

While most anglers think to avoid casting a shadow on the bed by keeping the bed between themselves and the sun, Reese said it is best to put the sun at the angler’s back to help hide themselves from the fish.   His reasoning is that a human has a hard time looking into the sun, so will a bass.

Reese positions the boat so that the sun is at his back, but he tries to keep from casting a shadow on the nest itself.  He teaches that this one tip has helped him put more fish in the boat while fishing the spawn. 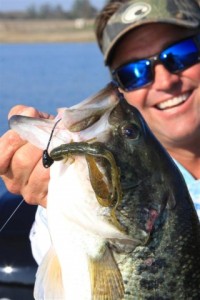 Byron Velvick – Go Natural
Perhaps the most accomplished sightfisherman on the pro tours, Byron Velvick has made sightfishing and swimbaiting his life’s pursuit as an angler.  With that said, Velvick has long been a proponent of using natural colors and smaller baits to coax bass into striking quicker.

While many anglers like a white lure that allows them to see the lure, Velvick feels that tossing a natural colored lure into the nest, then watching the fish’s reaction to the lure as well as the same feel and line movement tell him when the fish has struck.

Wrapping it Up
These are four tips that could help put more fish in your boat during the spawning season.  Remember to keep moving, locate new water that is holding new spawners and learn to read the actions and body language of the bass.  They will tell you when they are about to strike.

Get out there and catch a few.