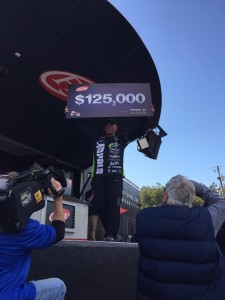 The Winning Moment from a Fan – photo by Nichole Jacobs

Editor’s Note – Dave Lefebre and his family have had a trying off season, the kind that make you question your existence as a professional angler.  There were some victories in the partnership category,  but there were also losses along the way.

This last weekend, Lefebre came from seventh place, eight and a half pounds behind the tournament leader Zack Birge.  Lefebre caught a healthy limit early in the day, and with less than an hour to fish, he hooked a quality four-pound largemouth that was being chased by a fish that looked a couple pounds heavier.  making a gutsy decision, Lefebre decided to allow the four pounder to swim around hoping to give the bigger fish a chance to hook up to the Rapala wakebait hanging from the caught fishes’ mouth.  His strategy worked, and in his blog entry here, he recounts how he was prepared to make the move, he explains how his faith was bolstered through the situation, and he was reminded that God does provide opportunities to those who are prepared.

Enjoy the below, in his own words…

by Dave Lefebre – Special to AdvancedAngler.com

I’ve finally had a chance to reflect on my latest win on Alabama’s Smith Lake. In this blog I want to tell the story of the double fish miracle in the 4th quarter of the final day.

There were many small miracles that happened leading up to this event and several people involved as well. You may not believe in miracles, but I do. Look around. God is real, He is

good, and He knows what He is doing. He knows what we need and takes care of his children with exactly that, not always what we want…but what we need. I give Him all the glory for everything that happened to allow me to come out on top. I’ve had some tough times lately and I admit that I doubted God…No matter what ever happens, I’ll never doubt Him again! I feel like I’ve been reborn. 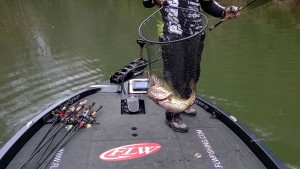 I’ll start by saying that I almost waited too long to start waking. The blueback herring colored Rapala BX Waking Minnow and a couple other similar baits were my key largemouth weapons. I told my cameraman and camera boat driver at exactly 2:00 PM on the final afternoon… “It’s time to go win this thing!”

Going back now – before takeoff – I asked Bill Taylor, our tournament director, what the largest comebacks have been over the years on Tour? He wasn’t sure, but I told him I was going to win today. I told Peyote, our TV producer, and some of the camera guys and media people I was going to win, despite an 8 1/2-pound deficit. I told the two guys I

was staying with too…they laughed (in truth, I probably laughed a little too, LOL). I wasn’t being cocky, I just wanted people to know before it happened. I felt it, but instead of shouting it out on Facebook and in the interviews, I would just say, “I feel really good!” There was an undeniable peace that passes all understanding.

Being in seventh place in the morning, I didn’t get a real cameraman, but they decided to give me one in the morning until about 9:00AM. Then despite my telling him I was going to win later, he was forced to go cover another angler, despite my and my camera boat driver’s arguing with him briefly. We had a great morning on the spots while he was there, but the last hour of the day was unbelievable and unfortunately, there’s no video of the events.

Here’s how it happened… 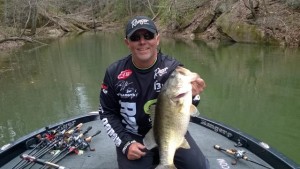 At 2:10PM I flew to the back of my best pockets. Blueback herring were spawning in there every morning and a school of big bass seemed to move in late each day. It was a postcard type of looking spot, a waterfall in the background, blue skies, and crystal clear, flat calm water with a couple of giant boulders just under the surface. I got in position, put my 10 foot Power-Pole Blades down quietly and immediately hooked a 3 ½-pound spot on my first cast…it culled. On my second cast I hooked a 4-pound largemouth and noticed a 6-pounder following behind and a little deeper. So even though I had a 2 ½-pounder still in my limit, I decided not to net the fish and let it swim around the boat in an effort to hook the bigger bass. The 6 pounder repeatedly banged the head of the other one, trying to steal the bait from its mouth. I was saying over and over “Please get the bait fish, get it, oh… c’mon get it!” It would swim down deep, come back up, swim around the boat, under the boat and back away from the boat.

In what seemed like an hour, but was probably about 30 seconds, the big fish finally stuck to the bait and to the other fish. I said “Oh my God, he got it, thank you God, please let me catch these fish, and in what seemed like another hour (again, probably another 30 seconds) I was able to reach way out and scoop them both up into the net. 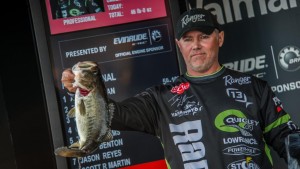 Thinking the ION camera was on (sadly it wasn’t) I showed the two big fish to it and then just broke down. I cried actually. It was overwhelming to me. It was the second to last of those many smaller miracles. And in my life I needed it. So many things rushed through my mind that instant. I didn’t think I won yet…I believed I still needed two more 5 pounders, but the realization that God just made that happen blew my mind, because that just doesn’t happen on its own. And the coolest part is that I think He trained me for that situation in the days before. I was ready for it…actually waiting for it. It didn’t work the first time or two, but it did when it counted. Each time it happened, including the last, I desperately needed the smaller fish, it was extremely stressful, but I felt that peace the last time, and never gave up on it. I told my marshal while this was all going on that I’m not netting that fish until that big one hooks up.

I culled up about four pounds on that double and I ended up needing the 6 pounder to eventually win. I then caught three others and culled one more time before I had to speed in to check in. I left myself 14 minutes to go what had been 15 minutes the other three days. I cut it way too close, but again…I didn’t think I had enough to win so I stayed until the last possible second. After cutting all the corners at 70 mph, I got back with only 80 seconds to spare…yikes!

At the weigh-in, on the hot seat through the final six anglers, I never thought I had it won. I was so disappointed that I didn’t catch that 24-30-pound sack; and, I was not expecting the others to stumble like they did either, especially Zack. But in the culmination of miracles…I had enough. Not what I wanted, but again…what I needed! 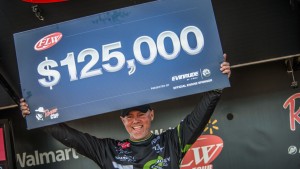 There’s a lot things going on in the world obviously and this in quite insignificant in the grand scheme of things I certainly know. But this event changed my whole world and I wanted to share it with you. God is so good. If you’re going through tough times, He can bring you through it. It may not make sense at all to you right now, but my guess is that it soon will. Don’t say “If it’s His will”, believe that it is His will and use the gifts you’ve been given to overcome your situation, or win! It’s not easy, it may be super hard in fact, but it’s definitely not just going to happen on it’s own. Nothing is too big. Trust Him, just TRUST HIM!

Finally, I want to thank everyone who was praying for me, and those who played a part in all of this… Scott Towry, for offering me his boat (my 2013 Ranger), my day one and day two co-anglers, Tim Cales and Hoyt Tidwell, my encouraging day three marshal and day four camera boat driver, David Lauer, my awesome day four marshal, Kerry Barnett, and as always, the good people at FLW!