Flippin’ in Slush with Denny Brauer

For any angler, the winter can be one of the most frustrating times of the year to fish. Outside of the need to wear bulky extra layers themselves for warmth, the conditions can have major effects on equipment, and more importantly, the fish. Frozen guides, frozen fingers and frozen enthusiasm can all be annoyances during the cold months. 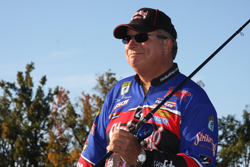 As frustrating as the conditions can be for anglers in general, for an angler who is a shallow water specialist, the winter months can be downright maddening at times. The skinniest parts of the water column often harbor not only the coolest temperatures, but they can actually freeze over. For Camdenton , Mo. pro Denny Brauer, the situation presents him a set of problems requiring executive decisions to solve them.

For an angler who has made the bulk of his career earnings with a single technique, Brauer has the utmost confidence in his skills with a Flippin’ Stick. For the most part, the approach means skinny water and heavy cover, and while some might think it a fruitless winter approach; Brauer disagrees.

“Flipping can be a great approach to trigger the right bites in the wintertime,” said the 1998 Bassmaster Classic Champion. “The key to being successful in the winter with a Flippin’ Rod is to properly choose the area to target, and fishing at the right pace.”

By the “right bites,” Brauer is referring to the kind of bass that have all of the photographers at a weigh-in reaching for their cameras. “When done right, Flippin’ gives an angler a chance to get bites from winning quality fish,” he said.

What is Cold?
Cold is a relative term, to anglers, as well as regions. For Brauer, most of the country falls into the cold water category once the thermometer dips below 50-degrees. However, in Florida or South Texas , cold might mean 55- degrees or less would qualify as cold. 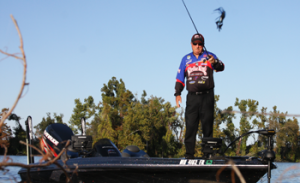 “It really depends on the lake and the region it is in,” Brauer said. “I’ve fished in water as cold as 29 degrees coming out of a dam, and managed to catch a five pounder out of there on a jig, so it’s possible to overcome very cold water; it all relates to were and how to fish.”

Brauer revealed that it is important to pay attention to trends in the area anglers are fishing. “Weather trends can play a big role in defining fish activity,” he explained. “A lake that is 50 degrees that fell from 55 degrees a week ago is going to fish differently than a 50-degree lake that warmed from 45 degrees a week ago; the fish in the warming trend lake are going to be more responsive.”

Brauer explained that bass are going to choose areas that give them maximum opportunity to feed and be as comfortable as possible when the water creeps towards freezing. “Bass won’t want to make long, horizontal moves in the winter like they will other times of the year,” said the 16-time B.A.S.S. winner. “The key to pinpointing their location is to find some sort of heavy cover near vertical banks, on reservoirs, and in Southern states like Florida, finding dense grass mats near deeper water is important.”

Once Brauer has identified areas of the lake that have docks, brush or grass near vertical structure, he then makes a second decision that will eliminate some of the water he’s identified. “Water clarity is huge in cold water,” he said. “Cold water is tough enough, but add dirty water to the equation, and the situation becomes almost unfishable; so, I look for the cleanest water I can find.”

On many of the lakes near his Missouri home, Brauer may find that the cover plus clear water problem leads him toward creeks off the main lake, but if the water is really muddy, it may lead him towards the backs of creek channels or the main river channels where the water begins to clear first.

Slow Down
Once he selects the water he’s going to target, Brauer said his first order of business is to slow himself down. “A typical Flippin’ approach for me is to move through the area making pitches to cover, and hop the bait a couple of times before retrieving and moving to the next piece of cover,” he said that doesn’t work in cold water. “I have to be more methodical in the winter, and how slow I go depends really on how cold the water is.”

He related that the strike zone of a wintertime bass might be incredibly narrow, and that bass may not even move an inch to bite a lure. “I believe that it is important to place the lure directly on their heads to generate strikes in cold water,” he said. “I also feel that it takes more time to make them strike, so I let the lure soak for quite a while, and even longer if I feel that a fish is in the area.”

How he retrieves the lure is decided as the day progresses. “I experiment as I go along trying to find what kind of retrieve will trigger a strike,” said the 1987 Bassmaster Angler of the Year. “I’ll see if they want me to shake the jig, slowly scratch it along the bottom, bump the cover with it, or just leave it in there and soak; but it has to be slow.”

Lure Choice
Brauer prefers a jig in cold water, and his first choice is his signature 1/2-ounce Strike King Denny Brauer Premier Pro Model jig tipped with his Denny Brauer 3X Plastics Chunk. “I stay with the 1/2-ounce size because I’m not concerned about a slow fall in the winter,” he said. “It’s more important to have the lure stay on the bottom when it’s cold.”

He chooses to trim his skirts in cold water because he feels it generates more strikes. “The more compact I make my lures, the better they work in cold water,” he said. “I trim the skirt to just behind the hook and rig the trailer so that it is as compact as possible.”

While the skirted jig is preference, he turns to Strike King’s soft plastic Rodent in the grass, because it is easier to work in the grass, but still gives him a, “natural appeal that draws big strikes.” 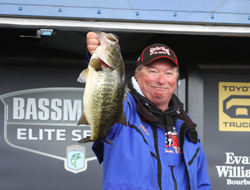 While he is known for his trademark black and blue color combination, Brauer said he goes another direction in cold water. “Remember, I am looking for clearer water in the winter,” he said. “I tend to use browns and greens in the winter, because they look more natural in the clearer water.”

Equipment
Brauer said he lets the cover he’s targeting dictate rod and line choices, but that his Ardent F700 Denny Brauer Flip and Pitch reel is always a part of the program. “Most of the time I use my American Rodsmiths 7’6” Perfect Flippin’ Stick,” he said. “But, if the cover is not as dense, I use my 7’4” Flip and Pitch model, and my 7’7” Big Nasty Flippin’ Stick for heavy grass.”

He also lets the cover choice dictate his choice of line. For the bulk of his fishing he chooses 25-pound-test Seaguar Invizix Fluorocarbon line, but said that he will turn to braid in the grass. “I get a lot more bites with fluorocarbon, but braid is better around the grass,” he said. “Each of them have their applications, and I let the cover dictate when to use what.”

Proof of Life
The most brilliant example of his cold water approach came in a U.S. Bass tournament on Truman Lake early in his career. He said that storms had come through the area, bringing cold, muddy water through the system. He found a pattern in the backs of creeks that brought his desired elements together. The pattern included clearing water, vertical banks and what Midwestern anglers refer to as sawdust floats; debris that covers pockets as the water rises. “I found that if I punched a jig through the mat, then pulled the lure back to the underside of the cover and shook it; got bigger bites,” he said. “I could catch fish off the bottom, but they weren’t winning caliber fish; the bigger ones wanted it on the underside of the mat.”

Brauer reported finishing that tournament in second place, but that his roommate one-upped him. “I told him about the pattern and he did a little better than me,” he said. “The effectiveness we both experienced showed me how good Flippin’ can be in cold water.”

He said that other anglers could find the same. “Dress warm, and be prepared to slow down, and they just might find some great ways to do well, Flippin’ slushy water.”