Love ‘em or hate ‘em, spoons catch bass. We’re not referring to the fact that they can scoop up a delicious bass after it’s been filleted and fried, but rather the slabs of metal that anglers tie on and entice with their vertical lift and drop, flutter method or cast and reel retrieve.

Murray is in fact so fond of spoon fishing that he calls himself a “spoon freak,” and he employs them any chance he gets. “Anytime bass are somewhere in the water column at least 10 feet deep and eating silvery baitfish; I can catch them on a spoon,” he quipped. 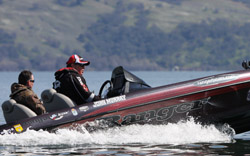 For the two time Bassmaster winner, spoons have evolved since his early days of using the technique. “It used to be all about a couple of Hopkins in my boat and slab spoons with heavy line; not anymore,” he said. “I use jigging spoons, flutter spoons, ice jigs and even blade type lures depending on the conditions.”

However he winds up catching the fish, he always starts with locating them, and his search starts right away.

Murray said that an aware angler can learn a lot by paying attention to their locators as they’re leaving the boat ramp. “I turn my Lowrance units on and watch the screen closely as I’m idling out to the five mile per hour buoys,” he said. “I can get a gauge on the depth the bait is at, and see if there are any predators showing around them too; it’s a good way to get a starting point that will save time later.”

After gathering his baseline data, Murray then pilots his Ranger to an extended main lake point that leads to a spawning area. “Bass will use those points as highways into spawning areas,” said the six-time Bassmaster Classic qualifier. “Once I find the point I want to start on, I start looking in that creek channel to find where the depth range I located coming out of the marina, baitfish and the bottom of the creek channel come together, and I start there.”

After he finds his preferred combination, Murray moves to the front deck, and begins to follow the channel out to the mouth of the creek. “At this point I am on the trolling motor slow and steady using a one-ounce Crippled Herring as a search bait,” he said. “I’m not moving fast, but I’m steadily moving forward and pitching the spoon out in front of the boat looking for the first bite.”

He pitches the lure 15 to 20 feet in front of his bow, and once the lure hits bottom, he begins a solid ripping retrieve. “I move the bait a foot or two off the bottom and let it fall back down while watching my line,” he said. “I do that until I get over the top of the bait, or until I get a bite.” 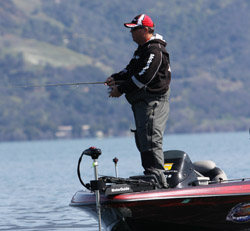 Once he gets that first bite, he begins to put the puzzle together. “It’s really important to use the first bite to analyze how the fish reacted,” he said. “Did it bite on the fall, on the bottom, or was it as I began to sweep it up again.”

Making the Most of the Opportunity
Once he has his initial feedback, he can work on developing the pattern that will repeatedly put bass in his boat. “I pretty much stay with the same retrieve from that point on,” he said. “After I catch a few fish from the school, I might have to change my approach altogether.”

Murray expressed his opinion that anglers often give up on a quality school of bass too soon. His experience tells him that the school will have a tendency to shut down after two or three of them are jerked to the surface. “I’ve seen a lot of guys give up on a school at that point, when all they need to do is adjust,” he said. “What I do is change lures at that point before I ever leave the area.”

He usually turns to a flutter type of spoon, preferring the 3/4-ounce Krocodile spoon at this point, or a big Lake Fork Flutter Spoon if larger bait are nearby. However, the bait switch is not the only change he makes, he also repositions himself. “The fish will often strike better after I move away from the vertical presentation,” he said. “I back off of the school enough to make a long cast and sweep the bait off of the bottom, through the school.”

After he feels like he’s given the flutter spoon a workout, he may turn to a blade bait like a silver buddy, or the River2Sea Glassie Vibe. He uses these baits to slow roll through the area, trying to maintain bottom contact through the retrieve. 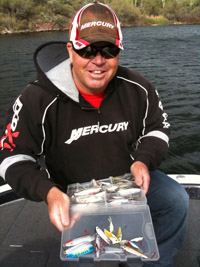 Gearing Up
Murray said that his favorite rod for all of his spooning applications is a  7’6” medium action Lew’s Flippin’ rod and a Team Lew’s Lite casting reel spooled with 15-pound-test fluorocarbon line. He said that he only goes heavier in line size if he is spooning around a lot of brush.

The days of stretchy monofilament left Murray , along with scores of other anglers with higher than normal loss ratios in their spooning, but new technology and hooks have helped. “I try to match the size of the hooks that come on the baits, but I usually change them to ST36 Owner Stinger trebles,” he said. “The strength and sharpness of the hooks will help me land more fish, as well as making sure I’m using a quality fluorocarbon line.”

Once he is hooked up, Murray recommends anglers keep steady pressure on the bass without over doing it. “I kind of steadily reel them up to the boat,” he said. “They can be sluggish in the cold water, and will usually dig for a little bit, but they’ll come up pretty easily. If anglers keep a tight line on them, and avoid any slack, they should land the majority of their bites with the right setup.”

So, with a little attention to detail, and some on the water practice, perhaps you too could be serving up results on some utensils of your own.