Wintertime can often drive angers batty. The cold water conditions and the frigid air temperatures mean less than ideal conditions for targeting black bass. Frozen hands, frozen line, and frozen bass are enough to make the staunchest bass angler turn to a warm fireplace and a cup of cocoa when their friends discuss going fishing. 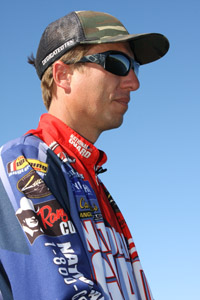 Instead of cuddling up with a warm mug and a blanket, stop pouting. Suck in that bottom lip and do what 2006 Forrest Wood Cup Champion Brent Ehrler does.

Go lipless, and turn that frown upside down.

“Given the right variables in the wintertime, bass go crazy for lipless crankbaits,” said the Redlands , Calif. based pro. “The conditions might not seem made for it, but it’s easier than it would seem to make them eat a lipless crankbait.”

When to go Vibe
To Ehrler, the absolute prime moment to pick up his lipless crankbait is when a few key ingredients combine to present the best recipe for success. “If I’ve got shallow grass and water that is slightly stained so that I can’t see the bottom in four or five feet; I’ll pick up my LV ‘s,” he said about when to throw his favorite Lucky Craft baits. “It could be a little dirty, or a little green algae stain, or that brownish tannic color in Florida waters that I like.”

While they will produce year round, he favors the winter time for throwing lipless crankbaits because they offer him a chance to take quick advantage of the bass’ circumstances. “The grass is dying off, and they really have limited places to go,” he said. “Even at the end of winter, when the grass just starts growing back, they only have so many places to hide.” 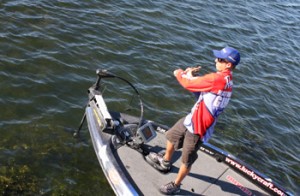 He said that he always looks for shallow grass as his personal favorite, but that he also has found some success around mud flats with isolated cover.

Which Baits
Ehrler revealed that his two favorites are the Lucky Craft LV 100, a 2.5-inch bait that weighs 7/16-ounce and the LV 500max, which measures three inches, and weighs 3/4-ounce. He prefers shad colors like Aurora Black and American Shad in slightly stained water, but chooses Chartreuse Shad when there is more color to the water; he turns to Ghost Minnow when the water is on the clear side. The six time FLW Outdoors champion said that his primary factor for choosing which model is water depth.

“I throw the 100 mainly in water that is three feet deep and shallower,” he said. “The 500 is my first choice though, and I throw it basically everywhere else.” The other factor that helps him make bait consideration is how fast he has to fish. “If they want the bait moving slowly, then I’ll turn to the 100, regardless of the depth.”

One example of his speed decision was the opening event of the 2009 FLW Tour event on Lake Guntersville . Ehrler, like the majority of the field was bombarding the North Alabama fishery with lipless crankbaits. However, while most of his competitors were burning heavier baits, the Southern California native slow rolled the LV 100 to get bigger bites than the majority of the field. 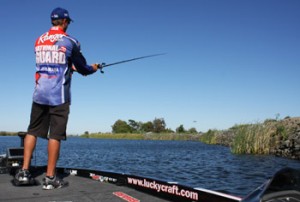 Practical Application
“I fished much the same areas as everyone else did during that early February tournament,” he said, “Everyone was catching good numbers of bass, but I was able to get a better average size of fish than most.” He found himself tied for fourth place after the first day, but a trio of lost fish on the second day; two four pounders and one he estimated at eight pounds dropped him in the standings; he finished the event in 11 th place.

He used the LV 100 on 14 pound Sunline FC Sniper Fluorocarbon to probe the deeper grass in the 44 to 55 degree water; most of his bites came from depths of 10 feet.

He revealed that he starts the morning with his lipless baits by using a medium fast retrieve. His reel of choice is a 6.4:1 Abu Garcia Revo Premier, and he said he uses most of its speed capabilities when beginning the morning. “Because they will strike this out of complete reaction, I want the lure to move quickly,” he revealed. “But, I don’t want anyone thinking I use a straight retrieve, I try to make the lure act erratically by crashing it into the cover.”

If his primary retrieve doesn’t produce results, he then begins to experiment to find the cadence the fish will respond to. “There is no rule of thumb to go by, I try different things until I get a response,” he said. “I might have to slow down a straight retrieve, speed it up, or even hop the lure off the bottom to get a strike.” 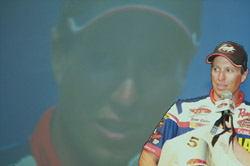 In the case of the hopping retrieve, he said that he uses the lift and fall method mostly on bare muddy flats with isolated targets. “I sharply pull the lure up so that the rod is at a 12 o’clock position and let the line go partially slack for the fall,” he said. “Most of the time they strike it on the fall, so I watch my line to see any unusual movement on the way down; if I do, I set the hook.”

Conversion Points
Lipless crankbaits have a reputation for landing fewer fish than strike; Ehrler has some tips that will aid in converting more strikes into travel partners for the day. “The first think I do is change hooks,” he said. “The stock hooks are sharp, but they can be a little small for handling bigger bass.”

Ehrler said that the LV 100 comes equipped with two size six trebles, and the LV 500max has a six on the back, but the front is a larger size four. “I pretty much stay with the size six on the LV 100, but I upgrade to the Owner ST-36 Stinger because it is ultrasharp, and extremely strong,” he said. “The short shank of the ST-36 allows me to upgrade both hooks on the LV 500 to the size four though, and that dramatically increases hook to land efficiency.”

He also said the type of line anglers use is critical too. “I use the FCSniper Fluorocarbon for most of my applications, with one exception,” he said. “In heavy grass, like on Lake Okeechobee , I turn to Sunline’s 28-pound-test Super PE braided line, because without it, the bait would never come back clean.”

When he chooses the FC Sniper, which is the bulk of the time, the size of the bait dictates the size range, and the cover dictates the final decision. “For the LV 100, the range is 14 to 16-pound, but I use the 16-pound FC Sniper on the LV 500 for everything, unless I need to go to braid,” he revealed. “The lighter line is used around sparse cover, and I upsize if the grass gets thick, or there is a lot of hard cover nearby.” 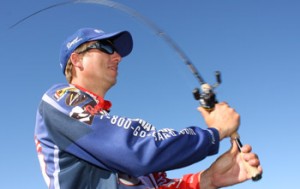 He said having a rod with the right amount of give will also help land more bass. “I use Lucky Craft Cranking Series casting rods, but use different models for each bait,” he said of his rod choice. “The medium action Fat Mini Magic is what I use for the LV 100 and the medium-heavy BDS for the LV 500. Both rods are seven footers, and both have the parabolic bend I need to land most of the fish I hook.”

Wrapping it Up
Ehrler said that anglers should keep an open mind, and try different retrieves to generate strikes. “I’ve had some awesome days with lipless crankbaits,” he said. “I’ve had days where I burned the bait up to a grass clump; let it pause for a second before continuing my high speed burn, only to have the bait stopped violently. Then I’ve had those kinds of days like at Guntersville that I needed to slow way down to get a bite. Either way, I’m covering water, and putting the bait in front of more fish than if I was fishing something on the bottom.”

“It’s a great way to put a smile on your face in any weather.”