Lefebre: On the Road Again

Seems like weâ€™ve been driving forever. We left Shreveport Sunday after the Expo and made it to Memphis. Then we left the Lackieâ€™s house around 3pm on Monday and drove to Louisville, KY. Now (Tuesday, 2pm) we are between Cleveland and Columbus, OH somewhere, about 3 hours from home. Iâ€™ll only be home for three days, but it will be worth it to fish the Bay. It is downright hammer time there right now and I canâ€™t wait to get out there and finish testing the last batch of Dobynâ€™s rods.

I had a good tournament on the Red River last week. Iâ€™m stoked to grab a 34th place finish and get the heck out of there. I was sick all week and was in 103rd after day oneâ€¦yuck! It was almost another massive train wreck like Chickamauga, but thank God things happened perfectly on day two. Iâ€™m sure that it had something to do with my precious baby girl (Macy), who prayed for her Daddy that day, asking God to give Daddy five big fish, ha ha. I love her, sheâ€™s the best little girl in the world. 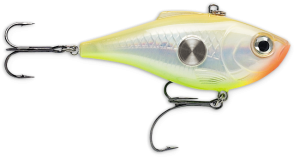 I caught most of them on a Â½ oz Rapala Clackin Rap. The didnâ€™t seem to want the louder rattling baits for some reason. The color is called Bone/Chartruese, it has a bone color on the back with a chartreuse belly and silver sides, great for muddy water like I was fishing. I used 17 lb test Berkley 100% fluoro, a Dobyns 705 CB Glass rod (the best trap rod ever made), and a Revo Premier high speed reel. I only lost one fish that last day that got hung on a stick, so thatâ€™s not bad at all considering I was reeling the bait fast and jerking the heck out of it. Those fish hit that thing so hard it was unbelievable. I only had 6 fish hook up all day and I bet I made at least 4 casts a minute for 8 hours, that comes out to about 2000 casts, lol. Wow, I got a bite every 333 casts, thatâ€™s exciting!!!!

Iâ€™ll be packing this week for the Potomac River FLW Tour Open, lots of jigs and D-Bugs. I havenâ€™t had the new Bugs since we fished there last, they will eat that thing big time. I leave early Saturday morning and practice starts on Sunday. That place is going to be crazy on Memorial Day weekend, I hope it rains and the wind blows. Iâ€™m excited to be going back to the Potomac River again, itâ€™s been a while. It is one of my favorite places to go in the world and I think we should be hitting it just right next week.

My turn to drive, Iâ€™ll catch you next week. I have s couple of friends from FLW coming to play on the Bay right after the Potomac event, they may not have arms when they leave, ha ha!